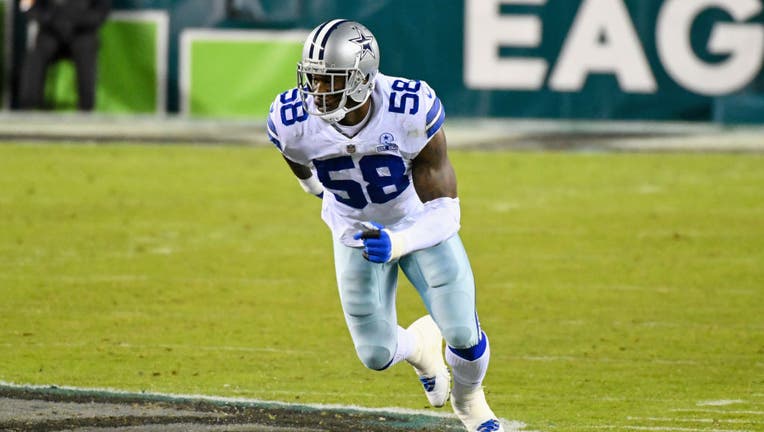 SEATTLE - Aldon Smith knows the Seattle Seahawks are giving him another chance at prolonging his once derailed NFL career.

It remains unclear whether another off-field transgression will keep Smith from playing for the Seahawks this season.

Smith spoke with reporters Saturday following the conclusion to the first week of Seahawks training camp, but said, "I can’t comment on it right now," when asked about his offseason arrest for battery in Louisiana. He is scheduled to be arraigned in late August.

The outcome of that case could determine whether Smith faces any additional discipline from the NFL and if his comeback that started last season with Dallas will continue in Seattle.

For now, Smith’s focus is on the field and appears to have the support of the organization.

"We’re gonna be there for him, we’re gonna look after him. He’s gonna get everything we got every step of the way," Seattle coach Pete Carroll said. "The burden falls on him and he knows that. But it’s really important, I think, for him to feel the support."

Smith was arrested in April in St. Bernard Parish near New Orleans on a second-degree battery charge. Deputies responding to a call for medical assistance found a man who said he had been assaulted by an acquaintance outside a business in Chalmette. Detectives identified the suspect as Smith and took out a warrant.

The arrest was another in a lengthy list of off-field problems for Smith. Police in San Francisco issued a warrant for his arrest on a domestic violence charge in 2018.. He avoided jail time in the domestic case by serving a 90-day sentence as part of his alcohol and drug rehab.

He’s also been arrested on multiple drunken-driving charges and spent four full seasons out of the league due to suspensions.

Smith was reinstated by the NFL last spring after signing a one-year deal with the Cowboys. He had not played in the NFL since 2015 but in his lone season with Dallas, Smith appeared in 16 games and had 48 tackles and five sacks.

Smith has been candid about his past off-field problems and the importance of his sobriety in getting back to being capable of playing football again.

"There’s a lot of people who wish that they could play this game and I’m glad that I just got a chance to be able to do the things I needed to do to get mentally right," Smith said. "That I could be in a position that when I came back, I could be focused on giving what I need to give it to be able to play."

After going to the 49ers with the seventh overall pick in the 2011 draft, Smith set an NFL record with 33 1/2 sacks in his first two seasons. San Francisco reached the Super Bowl in his second season, losing to Baltimore, and played in the NFC championship game each of his first three years.

His career spiraled from there but the opportunity last year in Dallas provided Smith hope of still being a productive player.

The Seahawks told Smith he didn’t need to be around for their offseason program or minicamp following his arrest, trusting he would do what was needed to be ready for the start of training camp.

"It was just letting let me know that the people here have my back and that they were willing to work for me," Smith said. "It just made me feel that much more comfortable with the decision that was made."

Carroll’s been impressed with what Smith has shown the first few practices. Smith said he’s slimmer than he was last year in Dallas when he was asked to play inside and on the edge, joking he was "kind of fat," last year.

But while he’s slimmer and still looks the part of a productive pass rusher, there will remain uncertainty about what he can provide for Seattle until there is clarity about his legal situation.

"He’s been very open with us. He’s told us when things were harder than others, and he’s been upfront in that regard. That’s helped us understand and believe, and trust that he’s working at it, and that it isn’t easy and it’s a lifelong commitment that he has to make," Carroll said. "We really sense that the more we can support him, the more obviously we can be there for him, the stronger it makes him."