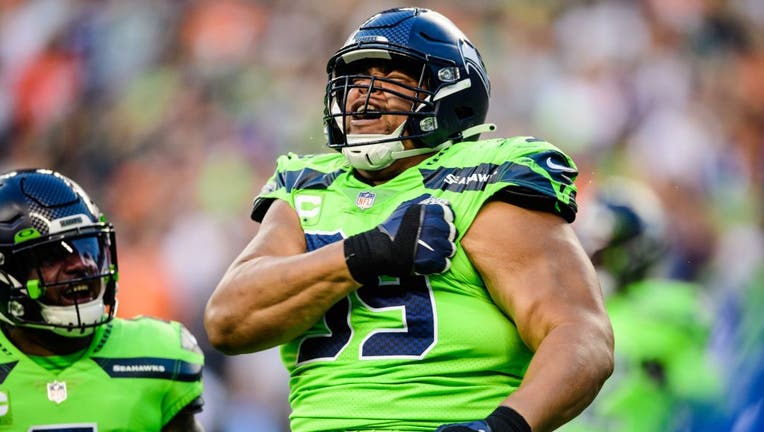 SEATTLE, WASHINGTON - SEPTEMBER 12: Al Woods #99 of the Seattle Seahawks celebrates during the third quarter against the Denver Broncos at Lumen Field on September 12, 2022 in Seattle, Washington. (Photo by Jane Gershovich/Getty Images)

SEATTLE - Running back Ken Walker III (ankle) and safety Ryan Neal (knee) are both in the lineup for the Seattle Seahawks against the San Francisco 49ers. However, nose tackle Al Woods is inactive and will miss the game due to an Achilles injury.

Walker missed Sunday's game against the Carolina Panthers and Woods was sidelined in the second quarter due to his injury. The Panthers took advantage of Woods' absence to rush for 223 yards, including 145 in the second half, in a 30-24 defeat.

Walker wasn't on the team's final injury report on Wednesday, indicating he would play against the 49ers. However, head coach Pete Carroll did say they wanted to take every minute available to them on the short week to see if players would be able to go.

Woods, Neal, running back DeeJay Dallas (high-ankle sprain), safety Joey Blount (back) and cornerback Tre Brown (illness) were the five players listed as questionable for Seattle on Wednesday. Of that group, Woods, Dallas and Brown are all inactive for the game.

The Seahawks elevated running back Godwin Igwebuike from the practice squad prior to the game. Igwebuike had 104 yards on three kickoff returns for Seattle against the Panthers and Carroll said he'd get another chance in that role.

"He did great," Carroll said after the Carolina game. "I thought he was a real surprise for us today to pop up like that, and he looked great at it. He was tough and fast and explosive and all of that. He will get another look."

With Dallas inactive and Tony Jones Jr. a healthy scratch at running back, Walker, Travis Homer and Igwebuike will handle the rushing duties for Seattle against the 49ers.

Tackle Jake Curhan and cornerback Artie Burns are the other healthy scratches for the Seahawks.

For the 49ers, quarterback Brock Purdy is officially active and will play for the 49ers. He had been listed as questionable due to an oblique injury.