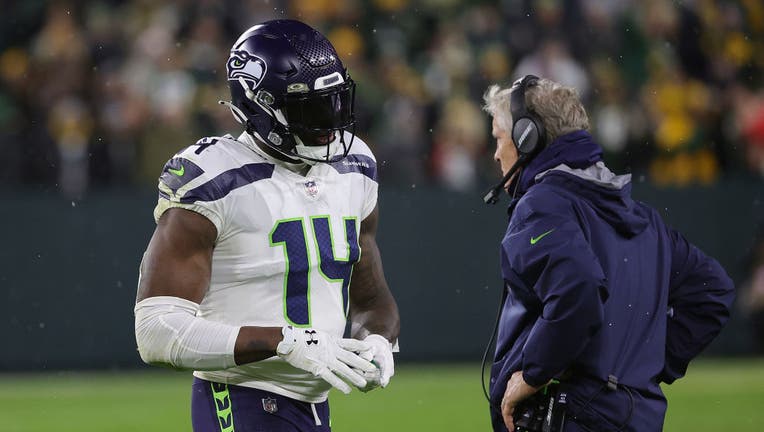 GREEN BAY, WISCONSIN - NOVEMBER 14: DK Metcalf #14 of the Seattle Seahawks is ejected from the game following an altercation during a game against the Green Bay Packers at Lambeau Field on November 14, 2021 in Green Bay, Wisconsin. The Packers defeat

SEATTLE - For the third time this season, DK Metcalf ended up in the office of Seattle coach Pete Carroll having conversations about matters other than catching passes for the Seahawks.

The latest came after Metcalf was ejected in the final seconds of Sunday’s 17-0 loss at Green Bay where the frustration of a sixth loss and Seattle being shut out led to Metcalf boiling over.

Metcalf said Thursday that he felt as if he was being "challenged," by the Green Bay secondary that led to the confrontation that included a few helmet slaps, a facemask grab and plenty of words being exchanged.

"I’m a passionate player and I’m never going to back down from anything," Metcalf said. "(Carroll) understands that but at the same time, I’m starting to become a leader on this team. I have to grow up and continue to get better. I know that I’m still a work in progress."

After a breakout season in 2020, Metcalf’s endured a rockier year so far this season, seemingly a mirror of what Seattle has done as a team. Metcalf has good numbers with 42 catches for 608 yards and eight touchdowns through nine games. But he’s seemed to disappear at times from Seattle’s offense and doesn’t have a game with more than six receptions.

Last week, Metcalf was targeted eight times, but finished with only three receptions for 26 yards.

"I’m just under a tighter microscope right now. Everybody is watching me to see what I do and how I would react," Metcalf said. "I’m taking that into account every time I’m going into a game or preparing for a week where I’m being looked at. It’s just another challenge that I have to overcome."

Carroll said Monday that he was already talking with Metcalf about the need for controlling his emotions. Metcalf’s season has also included a taunting penalty in the opener against the Colts, a fine for a confrontation with New Orleans’ Marshon Lattimore and a Twitter spat with Hall of Famer Shannon Sharpe.

"The last thing he wants is for this to continue. He’s been really good for five or six weeks now, he’s just been playing ball and digging in. He wants to make sure that’s what his work stands for, so I’m anxious to see him come back out this week and get going," Carroll said.