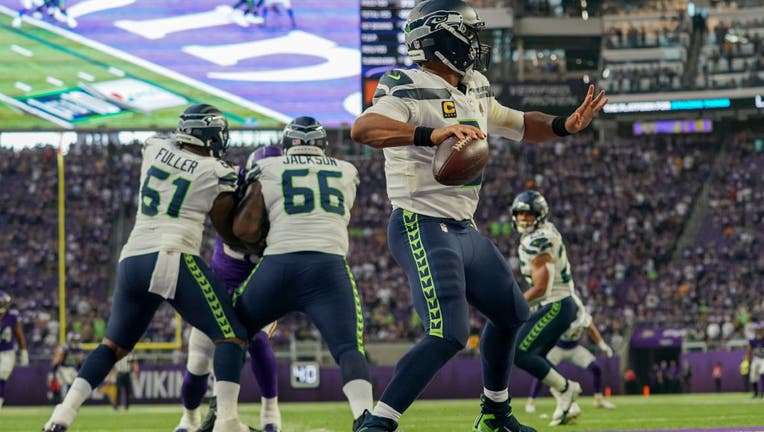 MINNEAPOLIS, MN - SEPTEMBER 26: Seattle Seahawks Quarterback Russell Wilson (3) makes a pass from his own end zone during the fourth quarter of a game between the Minnesota Vikings and Seattle Seahawks on on September 26, 2021, at U.S. Bank Stadium i

RENTON, Wash. - Throughout the moments when it seemed the Seattle Seahawks were headed for a downfall over the past decade, they’ve found a way to navigate those potential tipping points into their favor.

Only three weeks into the season, the Seahawks are at another one after Sunday’s 30-17 loss at Minnesota, the second straight loss for Seattle. And this moment feels different than the past.

It’s not an understatement that the next 11 days will determine the course of Seattle’s season. With consecutive division games against San Francisco and Los Angeles, the Seahawks can right their issues and get back into the dogfight that is the NFC West.

Or they can continue to leak yards and points on defense and be unable to establish any offensive consistency in the second half. If that’s what plays out over the next week-and-a-half, the Seahawks may find themselves likely out of the NFC West race by mid-October.

What’s working in Seattle’s favor is history. Wilson has never lost three straight games in his professional career. The Seahawks previous three-game losing streak under Carroll? A decade ago, one of the two seasons Seattle hasn’t made the postseason with Carroll in charge.

Seattle’s first-half offense has not been a problem. Entering Monday, no team in the league had scored more than Seattle’s 62 first-half points. The Seahawks have been especially efficient in the second quarter where they’ve scored 42 points in three games.

It was the biggest defensive question entering the season and remains the biggest issue. Seattle’s cornerbacks have been subpar at best. While there were concerns about Tre Flowers stepping back into a starting role, D.J. Reed has been equally picked on by opponents.

They have become the focal points of a pass defense that after Sunday ranked 26th in the league in completion rate allowed (70.7 percent), 26th in passer rating allowed (108.4) and is one of just four teams without an interception.

Carroll implied that Seattle played conservatively in its coverages against Minnesota to avoid getting beat deep, but in turn the Vikings took advantage with smart throws.

"It felt like that a little bit, they threw the ball underneath us quite a bit and then we didn’t do much to disrupt that," Carroll said. "I thought they played a pretty solid, conservative game."

Seattle should have passing game coordinator Andre Curtis back this week after he missed Sunday’s game dealing with a non-COVID-19 related illness.

RB Chris Carson seemed poised for a career day against the Vikings until the Seahawks offense sputtered in the second half. But his success on the ground in the first 30 minutes was reinforcement of his importance to the ways Seattle can function at its best offensively. Carson had 74 yards rushing on 10 carries and a 30-yard touchdown run in the first half. He finished with 12 carries for 80 yards.

Keeping with the theme of defensive issues, Seattle’s run defense has been equally substandard. Giving up a big game to Derrick Henry was one thing. Letting backup Alexander Mattison rumble for 112 yards is another.

The Vikings averaged 4.1 yards per rush a week after the Titans averaged 5.3 yards per carry and that was with Dalvin Cook as a spectator. The front seven was supposed to be the certainty for Seattle and even while sometimes playing a five-man defensive front, the group has failed the past two weeks to accomplish their job.

"Running game is all about the discipline and making sure that everybody’s in the right spots and everybody is hitting their fits well and we got a little bit shabby at times," Carroll said.

Carroll was optimistic that WR Dee Eskridge would be back this week after missing two games because of a concussion suffered in Week 1. He was uncertain about RB Rashaad Penny (calf), DE Benson Mayowa (neck) and RT Brandon Shell (ankle). Carroll said they should know more by mid-week.

Whatever the outcome is going to be, the Seahawks are likely to play a close game in San Francisco on Sunday. Four of the past five meetings against the 49ers on the road have been decided by three points or fewer. Seattle has won six of its past seven visits to San Francisco.