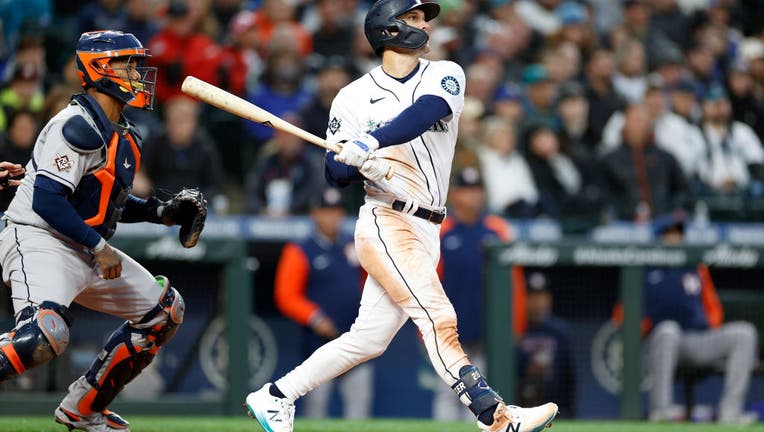 SEATTLE, WASHINGTON - APRIL 15: Adam Frazier #26 of the Seattle Mariners hits an RBI triple during the fourth inning against the Houston Astros at T-Mobile Park on April 15, 2022 in Seattle, Washington. All players are wearing the number 42 in honor

SEATTLE - Marco Gonzales allowed just one run in seven innings of work, and newcomers Adam Frazier and Jesse Winker led an offensive surge as the Seattle Mariners earned an 11-1 victory over the Houston Astros in their home opener Friday night.

Frazier and Winker – both acquired in trades this offseason – combined for six hits with five RBI and three runs scored as the Mariners pounced on Astros starter Jake Odorizzi. Frazier shined with four hits, four RBI and two runs scored. He was just a home run shy of a cycle in his first home game with the Mariners.

"I felt good coming out of spring and now I felt like I lost it a little bit so I'll just try to build on tonight and do it again tomorrow," Frazier said.

Frazier led off the game with a single and was driven in by Winker to give Seattle a 1-0 lead in the first inning. Frazier then delivered a two-out triple in the fourth inning that drove in Julio Rodriguez and Tom Murphy to extend the lead to 3-0. Winker added another base hit in the fifth inning and scored on a fielder's choice to make it a 4-0 advantage. Odorizzi (0-1) exited the game after allowing four runs on eight hits and three walks in 4 ⅓ innings of work.

"That was a fun night. I hope everyone in the ball park enjoyed it as much as we did," manager Scott Servais said.

Meanwhile, Gonzales (1-1) was in control for Seattle on the mound. He struck out five in the first three innings and managed to get Jose Altuve to ground into a double play to get out of a jam in the third. He made it through six innings scoreless before a broken bat single from Jose Siri with two outs drove in Yuli Gurriel to get Houston on the board.

Gonzales finished the night with just one run allowed on four hits with six strikeouts on 93 pitches. He also didn't issue a walk.

"Getting ahead in the count. Throwing five different pitches for strikes," Gonzales said of the key to his outing. "Pitching with a little bit of a chip on my shoulder. These guys have smacked me around for a long time so it felt good to stick it to them a little bit."

After a sacrifice fly from Jarred Kelenic made it 7-1, Frazier capped his night with a double off the top of the wall in right-center field that drove in Eugenio Suarez and Murphy to make it a 9-1 game.

Per the Mariners, Frazier is the first player with at least four hits and four RBI out of the leadoff spot in a game since Ichiro Suzuki on Aug. 17, 2004. It's also just the third time in his career Fraizer has had four RBI in a game. The other two instances both came in 2017 with the Pittsburgh Pirates.

Suarez delivered the cherry on top with a two-run blast to center field off Ronel Blanco in the eighth inning. Suarez had three RBI on the night for the Mariners.

In total, the Mariners had 13 hits, eight walks and struck out just four times. Kelenic was the only member of the starting lineup to fail to get a hit against the Astros, though he did reach base via walk.

"I think it was a full night all around," Winker said. "Marco dominated. We made all of our plays. Everybody that came in behind him pitched great and we swung the bats well."

Winker had two hits, walked twice, and scored a run for Seattle. Mitch Haniger also had a multi-hit game as the Mariners get back to .500 in front of 45,023 in attendance on Friday night.

"It was a tremendous atmosphere," Winker said. "It's a special place. This is my first day ever in Seattle and you can already tell that. It's really, really cool, really cool to be a part of it. I'm really happy to be here and looking forward to tomorrow."