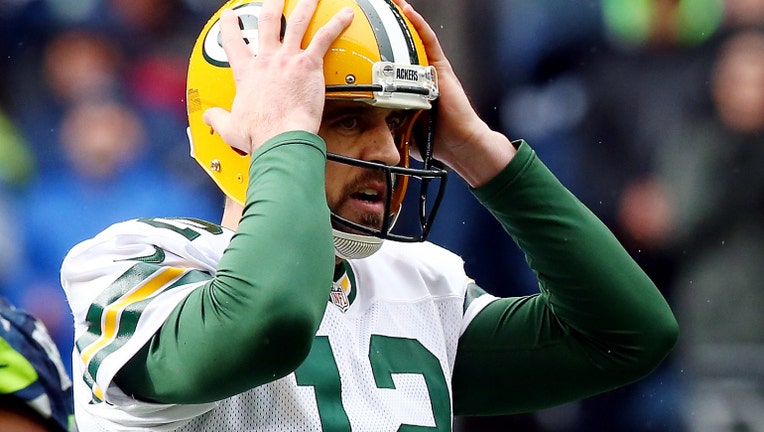 Aaron Rodgers #12 of the Green Bay Packers reacts during the first quarter of the 2015 NFC Championship game against the Seattle Seahawks at CenturyLink Field on January 18, 2015 in Seattle, Washington. (Photo by Ronald Martinez/Getty Images)

Rodgers was responding to listener questions Tuesday on a weekly radio show with ESPN Wisconsin. The question comes after the Seahawks beat the odds and overcame a 16 - 0 first-half deficit and beat the Packers 28 - 22 in overtime Sunday.

The quarterback was asked if such a big loss shakes his faith since athletes often thank God for their successes.

" says, 'I always find it a little off-putting when athletes, actors and anybody says, "This is what God wanted," or "I want to thank God for helping us win today," anything along those lines when a game or award is won. I'm paraphrasing here, but you get the gist. Personally, with all the chaos in the world, I'm not sure God really cares about the outcome of a game or an awards show. What do you think of statements such as these? You've obviously got your faith. Does what happens on Sunday impact your relationship with God or your faith at all?""

“That’s God setting it up, to make it so dramatic, so rewarding, so special,” Wilson reportedly told King. “I’ve been through a lot in life, and had some ups and downs. It’s what’s led me to this day.”

Rodgers has previously said he is religious.

The Seahawks play the New England Patriots in Super Bowl XLIX on Feb. 1.

NEXT:  How little could you REALLY spend and still make it to the Super Bowl?