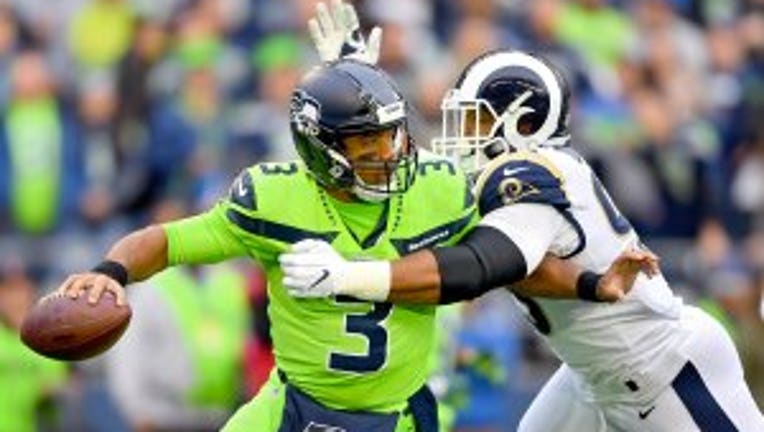 SEATTLE, WASHINGTON - OCTOBER 03: Russell Wilson #3 of the Seattle Seahawks is pressured by Aaron Donald #99 of the Los Angeles Rams during the first half of the game at CenturyLink Field on October 03, 2019 in Seattle, Washington. (Photo by Alika Je

SEATTLE – Are you breathing? No one would blame you if you’ve been holding your breath since Seattle’s stunning 30-29 victory on Thursday night primetime.

The highlight-filled contest against an NFC West rival proved two things: the Seahawks (4-1) can hang with the contenders and Russell Wilson needs to be in the MVP conversation.

“I thought Russell played one of the best games I’ve ever seen him play,” coach Pete Carroll said after the win. “I just thought Russ stole the show tonight…and on top of what he has done to start the season off.”

This is the best version of the seven-year veteran Carroll has ever seen. Why? Consider that Wilson has thrown for 1,409 yards, 12 TDs and 0 interceptions on the year.

The MVP race nearly always boils down to a signal-caller competition and Wilson is up against names like Tom Brady and Patrick Mahomes II - maybe you’ve heard of them.

The still-undefeated Chiefs and Patriots are putting up gaudy numbers, but that’s not a slight on Wilson. The Seahawks rely on a balanced attack with a strong running game backed by reliable passing, and Russ is manning the helm either way.

And here’s the bigger MVP case: Wilson is putting up career numbers while under constant threat. He’s been sacked a whopping 13 times so far. Meanwhile, Brady and Mahomes have been dropped just three times each.

Wilson is making something out of nothing on almost every play; his improvisational skills are saving an offense that can’t protect him.

Inconsistency has been Seattle’s Achilles heel.

An inconsistent defense is keeping opponents alive in every game. Rams QB Jared Goff didn’t have a bad night at CenturyLink Field. He put up nearly 400 passing yards, and Seattle’s defense looked helpless at times trying to stop him. It took superhuman plays from Tedric Thompson and Jadeveon Clowney to keep any distance from LA but that can’t be relied on all year.

An inconsistent offensive line leads to too many broken plays. Defensive lapses, particularly at right guard, means Wilson can only react and not think; good for Seattle he’s stellar at both. Russ is making all the right decisions even when he’s in trouble. One can only wonder the possibilities if Wilson had adequate protection.

Sad to say, but inconsistent coaching has put Seattle in the hot seat on more than one occasion. Thursday’s game didn’t need to be as dramatic as it was. A critical blunder right before halftime kept LA in the game.

The Hawks were up 14-6 and storming towards the Rams red zone, but then came a fourth-and-one decision. Carroll tried to bait the Rams into a penalty, but the team didn’t bite. Even with momentum well in Seattle’s corner, Carroll opted for a field goal attempt that missed. The choice gave the Rams enough time to rally for a touchdown that cut its deficit to a single point. Hindsight is 20/20, but Pete’s gambit failed in a big way.

Seattle is a glasshouse built on a rock-solid foundation. The Seahawks are winning or losing by inches, but it’s well in the win column because of a veteran core led by its quarterback.

Nothing is more emblematic of this than Wilson’s catch-of-the-year connection to Tyler Lockett. It was fine Seattle wine from two veterans who are among the only players Seattle can rely on.

The Seahawks’ only comfortable win was over a hapless Arizona club. Outside of that, Seattle has won its games by a combined margin of just four points.

Simply put, a good signal-caller would still be winning for many other contenders, but if Seattle only had a good quarterback, the team may very well be (1-4).

The Seahawks don’t have a good quarterback, they have Russell Wilson and four wins; isn’t this the definition of Most Valuable Player?