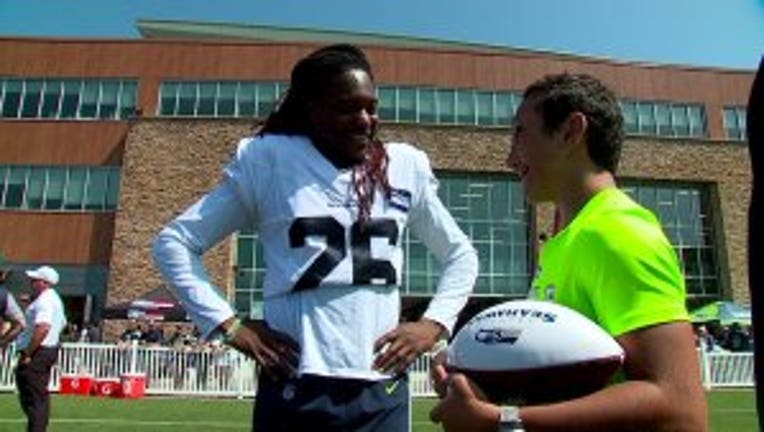 SEATTLE -- Many wondered if Seahawks linebacker Shaquem Griffin would even make the roster this year, but he did.

The first one-handed player in NFL history is making the most of his opportunity on the field while inspiring others to overcome their own challenges.

Among the thousands of 12’s might be the only Seahawks number one fan who’s never actually seen a game.

At a practice at the VMAC in Renton, a chance to meet your favorite athletes is a moment every fan cherishes.

But cherishing opportunities is something 16-year-old Humoody Smith knows well. He was shot in the face by Sunni insurgents in Iraq, losing his sight when he was two. Every moment of his life has been a gift.

A Washington family offered Humoody a better life, but the fearless ambition -- that’s all him.

On the wrestling mat or on the football field, Humoody was there - rushing for a first down for Snohomish High or winning State in the ambulatory division in the 100, 200 and 400 meters.

His story spread all the way to Seahawks headquarters and NFL coaches and players were lining up to meet Humoody - like star receiver Tyler Lockett.

“Just hearing something like that, it just makes you want to keep on going and inspire those you can inspire as well,” Lockett said.

Humoody and Pro Bowler Bobby Wagner each had a message for each other.

“Trying to be like you,” he replied. “Trying to find a way to win just like you did.”

Overcome with emotion, Humoody said the meeting was insane, but what’s really insane is how professional athletes were all in awe of him.

“I’m definitely going to be watching you now,” Shaquill Griffin said. “I’m going to keep an eye on you.”

It’s high praise from Shaquill. His twin brother Shaquem would deliver the inspiration.

“We related in that we both had struggles and he’s had great success and I’ve had some success,” Humoody said.

“When I see somebody living out their dreams, winning and doing everything they want to do. You can’t ask for much more than that,” Shaquill said of Humoody.