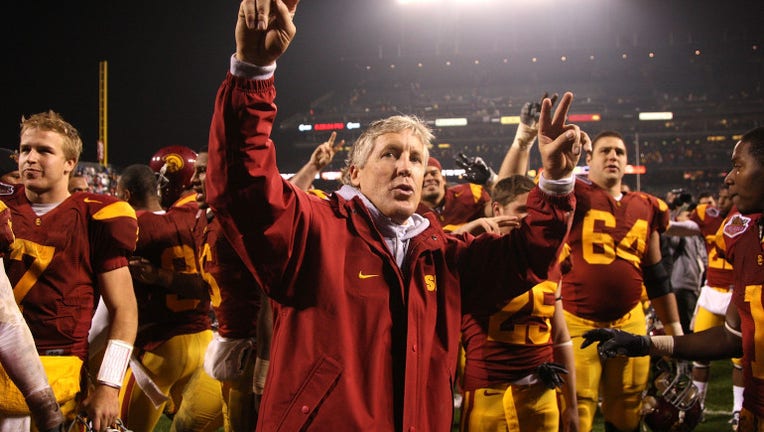 LOS ANGELES -- By now, 12s, you may have seen Ted Green's Los Angeles Times article from 2010 titled "Pete Carroll will lose credibility if he goes to Seattle."

Haven't seen it yet? Here's an excerpt:

"Tell you what else is going down if Pete takes the Seattle job: his credibility," Green wrote on Jan. 8, 2010. "And any chance he had of forging a coaching legacy anyone will want to remember."

Depending on your level of Hawks fandom, you likely either spit out whatever food you were eating at the time reading, or grabbed a torch and a pitchfork.

But hold on, 12s. We are already the loudest, proudest fans in the country.

Now, let the record show that we're also the most civilized.

Q13 FOX News spoke with Ted Green and gave him a chance to follow up on his ill-advised article. Issue a mea culpa, if you will.

And to our surprise, unlike (some?) a lot of hard-headed sports journalists and pundits who dig in when they're wrong, Green was more than happy to admit his faults and offer an explanation as to how anyone could write such a dastardly piece.

"I Googled the worst predictions in the history of time," Green said, chuckling. "Mine might be borderline Top 10 worst. It's not quite that bad, but it's up there."

Green, a former LA Times reporter, LA Lakers announcer and now a KTLA sports producer, makes it clear right off the bat. Despite what he wrote, he doesn't hate Seattle. In fact, he loved spending time here when traveling with the Lakers in the 80s.

The article was for a LA audience, he said. While it was filled with jabs and barbs at Seattle and its people (lines like, "I can’t believe Pete Carroll would leave Nirvana for umbrellas and Sea-Tac Airport," and "What’s he gonna have in Seattle, designer galoshes?") he actually meant it as rally cry for L.A. people. Not one big burn on Seattle.

"I knew what we were losing and what Seattle was getting in Pete Carroll," Green said. "I watched him at USC. He is special. He has that 'it' quality. Carroll was becoming a living legend at USC and I didn't want him to go."

Green says he still believes some of his premise for the piece was correct. Carroll was stepping out from a great position at USC to go to the pros, where he hadn't succeeded before. Green hoped that by contrasting the situations -- winning and sunny Los Angeles versus a rebuilding phase in rainy Seattle --  he could point out the differences and give readers a chance to see why Carroll should have stayed.

Of course, he was wrong. Pete has CEMENTED his legacy in Seattle. He has GAINED credibility.

And Green freely admits it.

"What Pete has done in Seattle is over the top amazing," Green said. "They are going to win a second Super Bowl. And I don't think they're done because they're so young."

"USC is still recovering from losing Pete," Green said. "Losing someone like him, it was tough."

Green likes to quote other notably bad predictions that stood alongside his own. Harry Warner, the President of Warner Brothers, famously asked in the 1920s, "Who wants to hear actors talk." Steve Ballmer laughed at the iPhone. The Bleacher Report gave the Seahawks 2012 Draft Class an F grade.

But Green likes to keep one journalistic credo in mind when looking back on the Carroll piece.

"If you can't be right, at least be entertaining," Green said.  "People are so provincial. When you go after a city you know it's not going to turn out well. I hope people got a kick out of it at least."

When Q13 FOX News asked if Green could ask or say one thing to the 12s five years after his article came out, he responds fast.

"I love it, where do I sign up," he said about becoming a Hawks fan. "Is there a membership?"

Pitchforks down, 12s. At least for now.