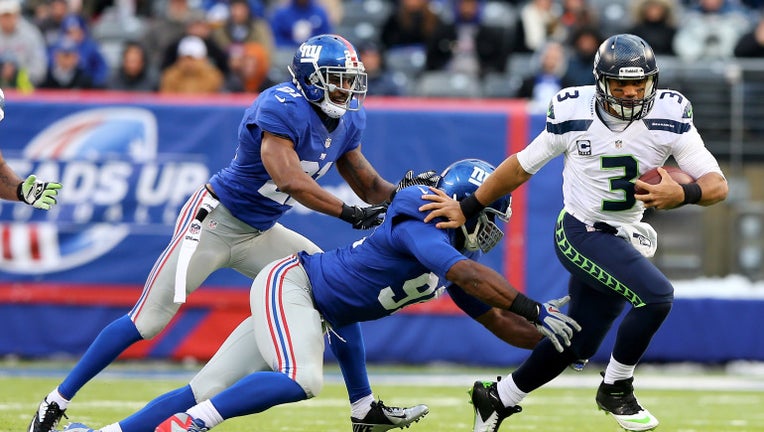 SEATTLE -- We're half way through the regular season, 12s.

How are you feeling?

Understandably, you're probably not as confident as you were toward the end of last year. The Seahawks have looked... not dominant?  Is that too harsh to say?

If you feel that way, you're not alone. Chris Burke of Si.com gave the Seahawks a C grade at the halfway point, and has this to say about our beloved Hawks:

"Don't be surprised if the Seahawks catch fire in the second half, enough to make a run at another Super Bowl. Right now, however, teams no longer are afraid of playing the defending champs. Dallas' win in Seattle and an ensuing upset by St. Louis proved that point."

Plenty of promise and expertise, but plenty of doubt, too.

The Hawks head into the last half of the season with games against the Chiefs, Cardinals, 49ers, Eagles and Rams. In order to set themselves up for a long post-season run, the Hawks need to win Sunday against the struggling New York Football Giants. A game that will be broadcast at 1:25 p.m on Q13 FOX.

5. Russell Wilson is amazing -- Wilson is coming off arguably one of his worst games as a Seahawk. Against the Raiders, he went 17-for-35 with no touchdowns. Some astute readers will point to the Hawks' patchwork offensive line as a large part of Wilson's struggles. In fact, the offensive line has been patchwork all season, but Wilson has largely shined in the face of the injuries. He has 11 touchdowns against three interceptions, with  1,669 total yards of passing with a 62.8 percent completion rating. Of course, Wilson also does it on the ground, rushing for nearly 400 yards. Even with the lack of production from heralded receiver Percy Harvin, Wilson and his work ethic have conquered difficulties, a big part of why the Hawks -- toeing the line with mediocrity -- have made it to 5-3.

4. After a blip, the defense showed they're still strong -- The Seahawks defense took plenty of criticism following back to back losses in October. It was arguably warranted. The defensive line's pass rush was feckless and injuries in the famed secondary had taken their toll. But the ship quickly righted itself, despite injuries and criticism. Sherman got an interception. The defense got a pick-6.  The slowdown seemed like a blip on the radar. While injuries are still an issue, the Hawks defense is back, and only getting stronger.

"We feel a connection," Earl Thomas told the Seattle Times after last week's win over the Raiders. "That's the most important thing."

3. Penalties are a pain -- Seattle is currently tied for 5th most penalties in the NFL.  Last year, they ranked first in penalties and they won the Super Bowl. Penalties don't win or lose a game, but they sure can make it hard to watch. Take, for instance, the game against Washington. Three -- count 'em, THREE -- touchdowns passes to Percy Harvin were brought back because of offensive line penalties. That's 21 points negated. Countless Beast Mode runs called back, pass interference calls and third-and-3s turned into third-and-8s because of penalties. As 12s, we love game day. But all these penalties are grinding our teeth into nubs.

2 . This team is still very much dependent on Marshawn Lynch and running the football -- The SB Nation headline says it best "The Seahawks need more Marshawn Lynch." After the failed Percy Harvin experiment ended, it became clear the Hawks needed to get back to what they do best: Running the football. In the Hawks most stunning loss at home against the Dallas Cowboys, Lynch only had 10 carries. Against the Chargers, only 6. The objective to get him the ball has never been clearer. Offensive coordinator Darrell Bevell called Marshawn "probably the best player on our offense." Let's continue to use him that way.

1. Injuries can make or break a season -- The list of injured Seahawks has been long. Soooooo very long. Safety Kam Chancellor. Centers Max Unger and Steve Schilling.  Tight end Zach Miller. Middle linebacker Bobby Wagner. Guard James Carpenter. Tackle Russell Okung. All have been out with injuries this year. In the Seahawks Super Bowl run, the team managed to stay largely injury free. The injuries and returns can make or break the season. At 5-3 the second half dominance will be largely a factor of health. We know the skill is there, the will is there. But are the players? Many return for Sunday's game against the New York Giants, so things are looking up. But an awkward tackle or an ill-timed jump could again put the season in peril, something we've unfortunately learned and endured this season.