Veronica Sheffey's turnaround jumper in the lane with 12.8 seconds left to play gave top-seeded Woodinville a 65-63 victory over Sumner and the 4A girls state championship on Saturday.

TACOMA, Wash. - Veronica Sheffey's turnaround jumper in the lane with 12.8 seconds left to play gave top-seeded Woodinville a 65-63 victory over Sumner and the 4A girls state championship on Saturday.

"That's kind of my signature shot, that short 15-footer pull-up (jumper)," Sheffey said. "I just saw the opening and did that spin move. She was a little bit back so I had enough space to hit the shot."

Sumner had a chance with the ball in the closing seconds only for a pass to bounce free off the fingertips of Alyson Deaver as time expired.

Sheffey scored a team-high 23 points and Tatum Thompson scored 21 to carry the Falcons to the championship.

Alyson Deaver had 19 points and 10 rebounds, and twin sister Catelyn added 11 points and 12 rebounds as the No. 2-seed Sumner Spartans earned a 64-55 victory over the Pasco Bulldogs in the 4A girls state semifinals on Friday night.

Woodinville has played in the state championship game in three of the last four tournaments, losing in 2018 and 2020 to Central Valley before finally breaking through against the Spartans.

Woodinville was able to build sizable leads at multiple points only Sumner to rally back. Sheffey scored early in the second quarter to give Woodinville a 27-16 lead. Alyson Deaver and Lainee Houillon combined to spark a 14-2 run to take a 30-29 lead.

The lead grew to 10 again in the third quarter before Houillon and Alyson Deaver again carried a Sumner rally. A breakaway bucket and a three-point play from Houillon made it a 49-48 game at the end of the third.

Thompson took control in the fourth quarter with 10 of her points coming in the final frame. A pair of free throws from Thompson with 3:39 left gave the Falcons a 57-54 lead. Catelyn Deaver, twin sister of Alyson, answered on the next possession and Alyson gave Sumner a 58-57 lead with 3:02 left.

Houillon then had a breakaway attempt to extend the lead only for Thompson to run her down and make a block from behind to save the bucket. Thompson would score on the next possession to give Woodinville the lead again.

Catelyn Deaver hit a 3-pointer with 1:17 left to tie the game at 61-61. Thompson and Alyson Deaver traded buckets before Sheffey's jumper put the Falcons on top for good.

"I had a really good gut feeling that we were going to get the stop on defense," Thompson said. "… We played defense and we got it."

Brooke Beresford had 16 points and eight rebounds for Woodinville.

"I can't explain it. This is the best thing. I thank God for everything. He led us here, so I'm thankful," Sheffey said. 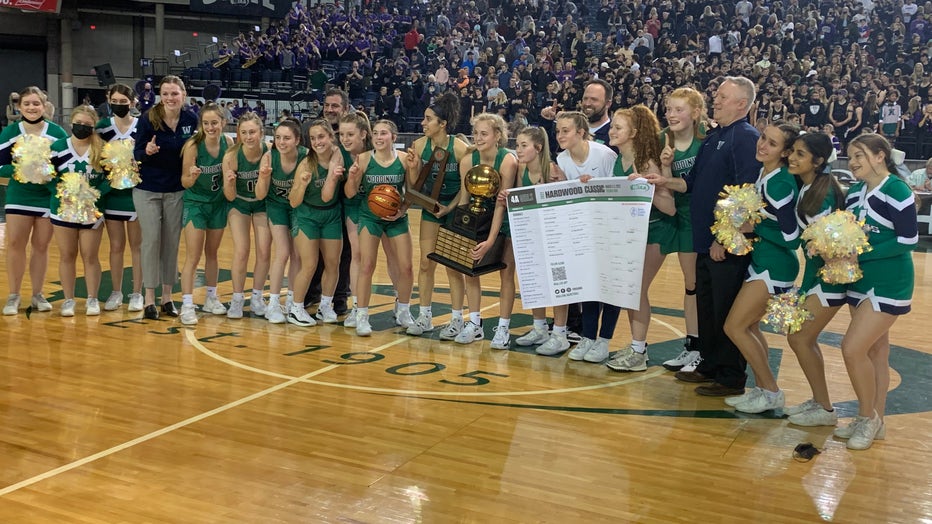 The Woodinville Falcons celebrate their 65-63 victory over the Sumner Spartans in the 4A Girls championship game on Saturday March 5 at the Tacoma Dome. (photo by Curtis Crabtree / FOX 13 Seattle)