A driving basket from Zoom Diallo and an intercepted pass leading to a breakaway lay-up from Tyce Paulsen served as the critical blows for Curtis as they beat top-seeded Mount Si 52-49 in overtime to earn the 4A boys state championship.

TACOMA, Wash. - A driving basket from Zoom Diallo and an intercepted pass leading to a breakaway lay-up from Tyce Paulsen served as the critical blows for Curtis as they beat top-seeded Mount Si 52-49 in overtime to earn the 4A boys state championship.

Curtis forced the Wildcats into 20 turnovers in the game with Paulsen's thievery of Cam Holliway at mid-court providing the decisive blow.

Diallo led the attack for Curtis as he constantly attacked the basket throughout the game. His 22 points led all scorers.

"We told each other ‘hey, it’s overtime. Three more minutes. Just fight. That's all we have to do is fight.' That's what we did and look what we got," Diallo said while holding the championship trophy.

Devin Whitten scored 16 points and Cinque Maxwell added 13 as No. 2-seed Curtis beat Union 49-40 in the semifinals of the 4A boys state tournament on Friday night.

The lead changed 11 times in total throughout the game as both teams traded blows. Curtis built a 39-36 lead with 3:20 left in regulation. Holliway and Quin Patterson answered with consecutive 3-pointers for Mount Si to retake the lead with 36.9 remaining. Diallo quickly drove for a basket to cut the lead to 42-41 with 26.0 left to play.

After a pair of fouls by Curtis to try and force Mount Si to the free throw line, the Wildcats made a bad turnover back into their own end that nearly led to a go-ahead bucket inside the final 20 seconds. Blake Forrest missed a free throw with 10.9 left and Diallo would get back to the free throw line with a chance to win with 5.8 remaining. Diallo missed the first of his two free throw attempts as the game went to the extra period.

Patterson scored five points in overtime for Mount Si with Holliway converted a pair of free throws as the Wildcats held a 49-47 lead with 1:09 remaining.

Diallo scored with 52 seconds left to tie the game and Paulsen's steal and bucket gave Curtis the lead with 25 seconds remaining.

"I saw he was flustered. I knew he had to make a pass somewhere. That was the only guy close. I just made a basketball play, read it and ran away," said Paulsen, who finished with 11 points and six rebounds for the Vikings.

Bennett O'Connor's baseline drive attempt saw his shot swirl around the rim and fall out. A jump ball went to Curtis on the possession arrow with 1.3 seconds left. After Diallo converted 1-of-2 free throws, Mount Si was unable to get a full court heave attempt off before the buzzer.

Forrest led the Wildcats with 13 points. Patterson scored 12 and Holliway finished with 11.

"I'm going to enjoy this for a long time, man," Diallo said. 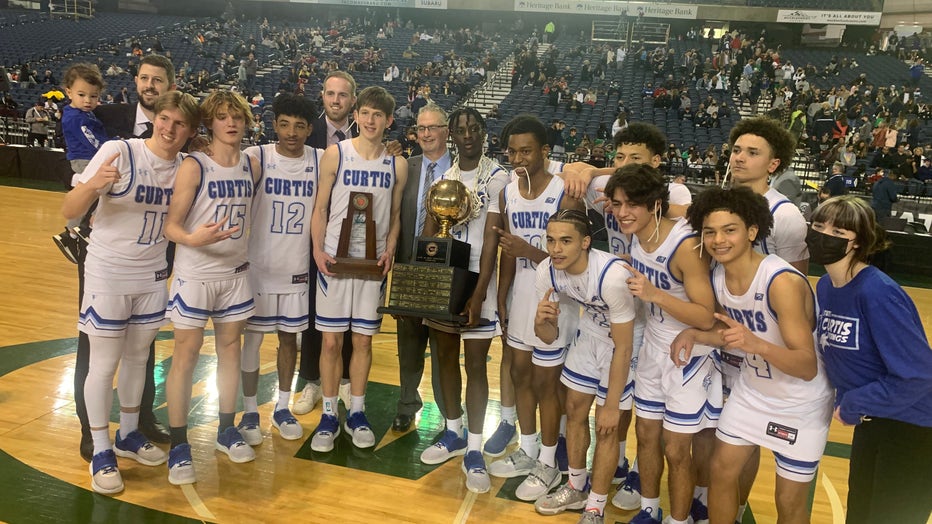 The Curtis Vikings pose with the 4A boys state championship trophy after beating Mount Si, 52-49, in overtime on Friday March 5 at the Tacoma Dome.