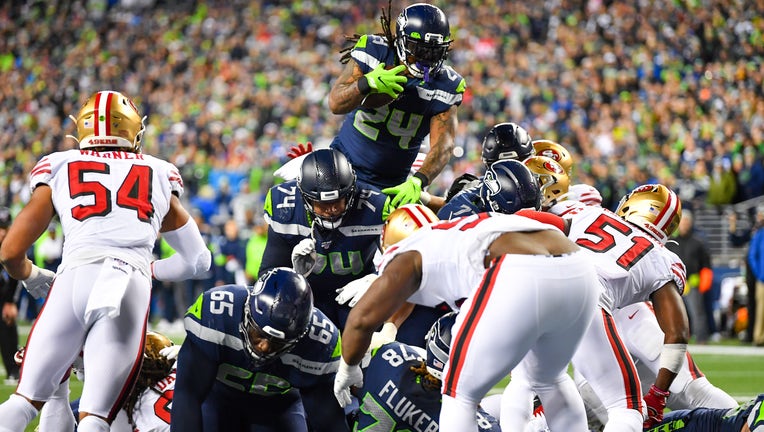 SEATTLE, WASHINGTON - DECEMBER 29: Marshawn Lynch #24 of the Seattle Seahawks leaps and scores during the during the fourth quarter of the game against the San Francisco 49ers at CenturyLink Field on December 29, 2019 in Seattle, Washington. (Photo b

SEATTLE (AP) - The loud piped in noise at practice, silent counts and other preparations that usually accompany a trip to Seattle aren’t necessary this year for the San Francisco 49ers.

With the Seahawks one of the teams that still isn’t allowing fans in the stadium because of the coronavirus, the Niners will only have to deal with the 11 defenders on the field for Seattle instead of the vaunted 12th man when the teams play Sunday.

“It’s definitely weird,” All-Pro tight end George Kittle said. “But the fact that we get to go there and we’re going to be able to hear every cadence, not have to go on the silent count, it’s going to be refreshing. I’m looking forward to it because it does definitely gives the offense an advantage.”

Dealing with the crowd noise has been a major issue for opposing offenses ever since the Seahawks moved into their stadium in 2002. It’s always been known as perhaps the loudest venue in the league and even set a world record for loudest noise at an outdoor stadium in a 2013 win over San Francisco.

The Seahawks have traded the top spot with the Chiefs over the years since then but the noise in Seattle gets as loud as being on an aircraft carrier deck when opposing offenses are on the field.

That makes it nearly impossible to change plays at the line of scrimmage and often has led to false starts, miscommunications and offensive linemen who are slow off the ball because they can’t hear the snap count.

Despite not having to deal with those challenges, Niners quarterback Jimmy Garoppolo said something will be missing Sunday when the teams play. Garoppolo won his only start ever in Seattle in the season finale last year that gave the San Francisco the division title when the Niners stopped the Seahawks at the goal line on the final play.

“I’ll miss the atmosphere up there,” Garoppolo said. “It’s one of the coolest places to play just with the fans and everything, but yeah, definitely with the cadence, the procedure and all that stuff it will definitely make it easier for us. So, looking forward to that.”

The lack of crowd noise won’t be the only change this year that should make things easier on the Niners offense when they play in Seattle.

The normally stingy Seahawks defense that harassed opposing offenses for most of the past decade is a thing of the past. Seattle has allowed 479.2 yards per game, including 368.7 on pass plays, the worst in NFL history through six games.

Seattle has allowed at least 23 points in each game, including in a 37-34 overtime loss at Arizona last week. But they still have won five of six games thanks to Russell Wilson and the league’s most prolific offense.

“Whenever you do have an offense playing like that, usually the opposing offense is trying to play a lot of catch up and stuff and they’re doing a lot of aggressive things. And they’ve given up some explosives, which gets the yards going, but they’re still third in the league in turnovers, which means they cause a lot of problems.”