"This is like the best thing ever," Samuels said.

Garfield survived an 11-0 run from Lake Washington in the final quarter that flipped a game the Bulldogs had controlled for long stretches. A 3-pointer from Jolie Sim with 3:12 remaining gave the Kangaroos a 38-33 lead.

Katie Fiso, Samuels and Jones each scored to put Garfield back ahead, 39-38, with 1:10 left to play. After misses by both teams, a rebound from Elise Hani with 12 seconds left gave Lake Washington one final chance. A heavily contested 3-pointer from the right wing as time expired from Rae Butler Wu hit the top of the backboard to clinch the title for Garfield.

Garfield exploded for 23 points in the final quarter to overcome a six-point deficit and defeat Arlington 56-42 in the semifinals of the 3A girls state tournament on Friday night.

Lake Washington had to play without Hani and Rosa Smith – the two leading scorers in the Kanagroos semifinal win over Mead – for large stretches of the game due to foul trouble. Hani picked up her third four early in the second quarter and sat until halftime. She'd pick up a fourth foul just 1:04 into the third quarter and return to the bench until the fourth quarter. Smith, meanwhile, picked up her fourth foul at the 5:10 mark of the second quarter and sat until late in the third quarter.

"We knew had to take the two star players out of the game, which was Rosa and [Elise] and once we knew that she had three fouls in the first quarter we knew we had it in control," Fiso said.

Lake Washington had an early advantage, building a 15-12 lead. Garfield began to employ a full court pressure defense late in the second quarter that caused the Kangaroos to falter and opened the door for Garfield to take a 26-22 halftime lead.

The lead continued to grow into a 33-24 advantage late in the third quarter before Lake Washington's run to take the lead.

"We made some to stay poised," Samuels said. "We tried to stay as poised as possible. At the end of the day, we came out with the W."

Butler Wu carried Lake Washington with Hani and Smith on the sideline. Her 16 points led the Kangaroos in scoring. Hani finished with six points, Smith with only one. 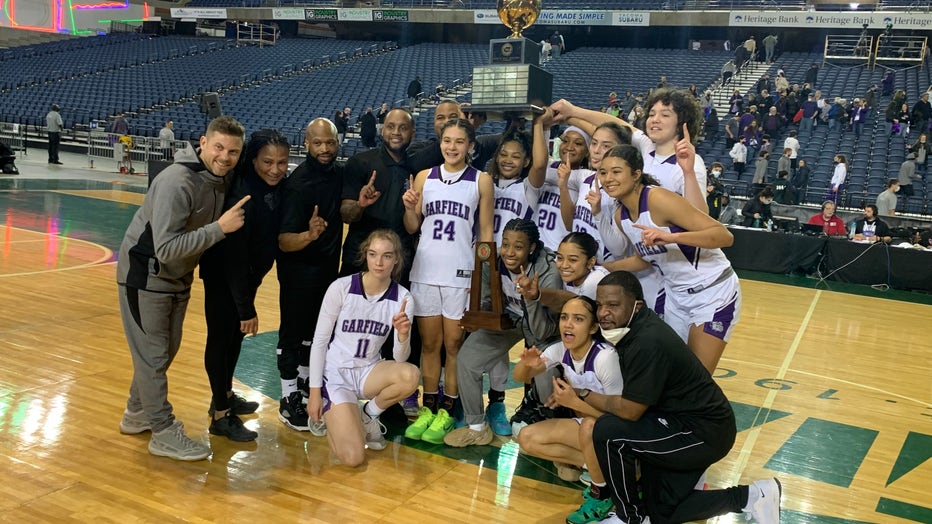 Garfield celebrates their 3A girls state championship victory after a 39-38 win over Lake Washington on March 5, 2022 at the Tacoma Dome. (photo by Curtis Crabtree / FOX 13 Seattle)