Hansen Kaden scored 19 points and Trevon Blassingame added 17 points with nine rebounds as the Auburn Trojans took home the 3A boys state championship with a 58-48 victory over Rainier Beach on Saturday night.

Kaden and Blassingame ran and jumped upon the media table that flanked the side of the court to celebrate as time expired, popping their jerseys to the school's student section.

Blassingame had to carry the weight down the stretch for Auburn as Kaden fouled out with over two minutes left to play. He scored eight of the last 10 points for Auburn to seal the victory,

"I just wanted to put the game away bring home the trophy," Blassingame said.

After tying the game at 9-9 in the first quarter, Rainier Beach would never get back level again. Kaden and Blassingame sparked a 10-0 run to take a 19-9 lead and never looked back. The lead grew to as many as 12 points, 36-24, early in the third quarter.

The Vikings did chip away at the Auburn lead. A 7-0 run to open the fourth quarter cut the lead to 46-43 with 5:50 remaining. A pair of free throws from Dae'Kwon Watson and buckets from Kaden and Blassingame pushed the lead back to nine, 52-43.

DeMar Johnson scored 17 points, and Josh Conerly Jr. had 14 points and 13 rebounds to carry No. 4-seed Rainier Beach to a 53-50 victory over Mount Spokane in the 3A boys state semifinals on Friday night.

Kaden fouled out with 2:08 left to play with an intentional foul against Myles Daymon.

"When I came out I knew I had to be a great teammate and show energy on the bench because there was nothing I could really do," Kaden said. "I knew our team was going to be fine because we have players, we have other guys that can step up and do things. That's what's so special about our team."

Daymon made his two free throws and a technical foul against Luvens Valcin led to more free throws for the Vikings. However, Nahmier Robinson missed both of his attempts to keep the lead at six. Blassingame scored six points in the final 90 seconds for Auburn.

Semaj Brown was injured in the first half on a hard block from Daymon. He remained on the court for a few minutes before limping to the locker room. He did not return to the game. 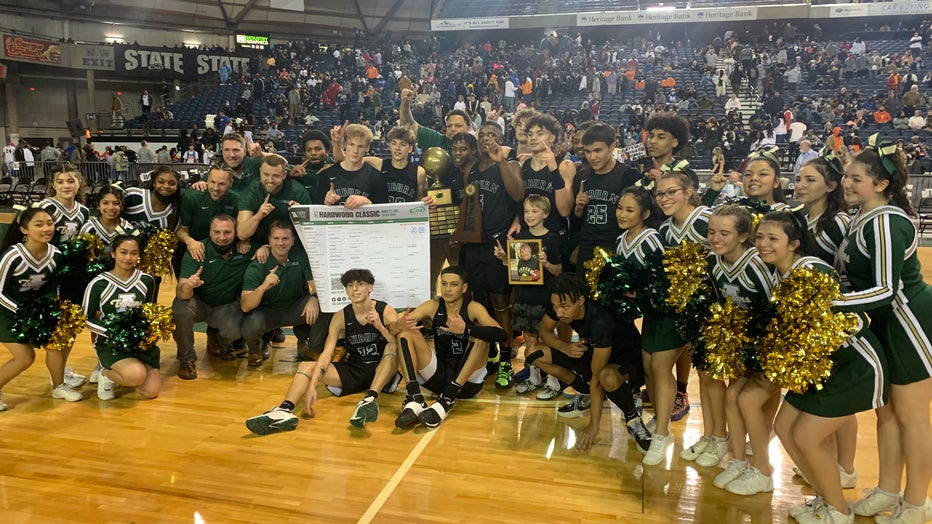 The Auburn Trojans celebrate their 3A boys state championship following a 58-48 win over Rainier Beach on March 5, 2022 at the Tacoma Dome. ( )