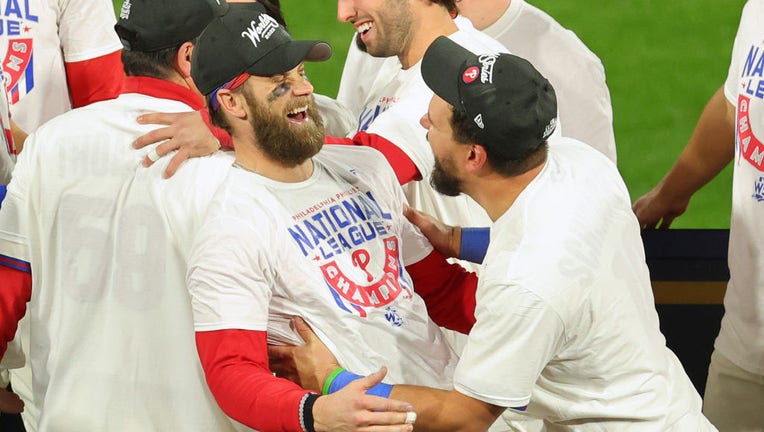 Bryce Harper #3 of the Philadelphia Phillies celebrates with Kyle Schwarber #12 after defeating the San Diego Padres in game five to win the National League Championship Series at Citizens Bank Park on October 23, 2022 in Philadelphia, Pennsylvania.

Dusty Baker trying for a most elusive win. Justin Verlander, too. A fired-up Harper and All-Stars J.T. Realmuto and Zack Wheeler, stepping onto baseball's biggest platform for the first time.

Yo! The Philadelphia Phillies, of all teams, are headed to the World Series. Against those back-for-more Houston Astros, y'all.

RELATED: Philadelphia erupts with excitement in 'peaceful' celebrations as Phillies move on to World Series

The Phanatic and Phils fans need a late rally at Citizens Bank Park? Dial up something from "Rocky." Want to party in Houston? Sing and clap along with mascot Orbit to Moe Bandy's bouncy "Deep in the Heart of Texas" during the seventh-inning stretch.

Harper already has hit five home runs this postseason. In the signature swing of his career, his eighth-inning drive against San Diego on Sunday in Game 5 sent the Phillies into the World Series for the first time since 2009 and earned him the NL Championship Series MVP.

The Astros are 7-0 this postseason after finishing off a four-game sweep of the New York Yankees in the AL Championship Series. Alex Bregman's go-ahead single keyed a 6-5 win Sunday night.

After losing the World Series last year, Houston opened as a solid favorite to win the title this year, according to FanDuel.

Odds are, crowd might witness a Schwar-bomb or the Chas Chomp along the way.

But no possibility of seeing a sibling rivalry. Astros reliever Phil Maton broke a finger on his pitching hand when he punched his locker after a shaky performance in the regular-season finale, an outing that included giving up a hit to his younger brother, Phils utilityman Nick Maton.

City of Brotherly Love, not so much. But a nice treat for fans in both cities: The Philadelphia Eagles, the NFL's only unbeaten team, visit the Houston Texans on the travel day between Games 5 and 6, if those are needed.

Weather won't be an issue with the retractable roof in Houston. No telling what the elements will be with the open air in Philly.

With the likes of Jose Altuve, ALCS MVP Jeremy Peña, Rhys Hoskins and Alec Bohm, this World Series is a best-of-seven matchup representing some of the game's best present and future. Plus a good piece of the past — remember, these teams have played each other nearly 600 times.

There was the thrilling 1980 NL Championship Series, when Mike Schmidt, Pete Rose, Steve Carlton and the Fightin' Phils outlasted Nolan Ryan at the Astrodome on the way to their first World Series title.

And this neat piece of history — the Phillies were the first team to ever beat Houston, back in 1962 when the expansion Colt .45s lost at Connie Mack Stadium.

Funny, the Phillies are also the most recent team to beat the Astros. Way back on Oct. 3, Philadelphia opened the final series of the regular season with a 3-0 win at Houston, with Schwarber homering twice as Aaron Nola outpitched Lance McCullers Jr.

The Astros then closed out an AL-best 106-56 record by winning the next two behind Verlander and Framber Valdez — Philadelphia still leads 297-283 in their head-to-head matchups, mostly all before Houston moved from the National League to the American League in 2013.

Houston then swept Seattle in the AL Division Series and the Yankees in the ALCS featuring its winning formula of imposing starting pitching, a dominant bullpen and a lineup full of home run hitters such as Alvarez and Kyle Tucker. 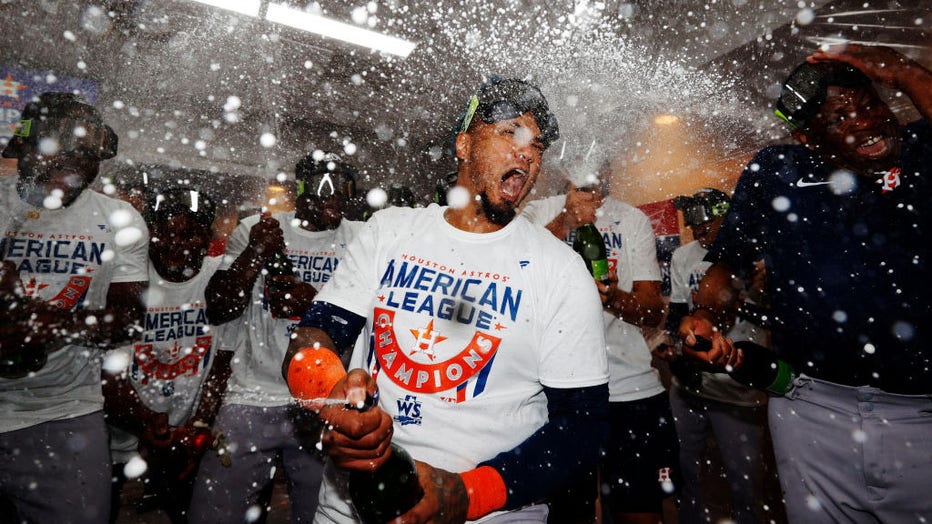 This marks the Astros' fourth trip to the World Series in six years and their only title in 2017 was tainted by an illegal sign-stealing scandal. Last season, they lost to Freddie Freeman and the underdog Atlanta Braves in six games.

At 73 and in his 25th season as a manager, Baker is looking for a crown to cap his ample resume.

"I mean, victories drive me. And I’ll get it," he said during the ALCS. "You can’t rush it before it gets here because it ain’t here yet. So you just got to put yourself in a position to do it."

The Phillies, meanwhile, looked like a big zero this year before getting to this point in October.

Stuck at 21-29 going into June, they fired manager Joe Girardi a few days later and put the interim tag on bench coach Rob Thomson. Then suddenly, the Phillies took off.

They overcame Harper's broken thumb, sidelining the two-time NL MVP for two months, beat out Milwaukee for the final playoff spot in going 87-75, and quickly topped NL Central champion St. Louis in the wild-card round. Philadelphia eliminated defending World Series champ Atlanta in the NLDS and topped San Diego in the NLCS.

Now, with Thomson having been rewarded with a two-year contract, the Phillies are the first third-place team in baseball history to reach the World Series.

Philadelphia lost to the Yankees in its last trip this far. A year earlier in 2008, Lidge capped off his remarkable year of going 48 for 48 in save chances to close out the Phillies' second title as a team led by Chase Utley, Jimmy Rollins and Ryan Howard beat Tampa Bay in five games.

Spurred by their rollicking home crowd, Harper and this bunch of Phils hope to add another banner.

Thomson is trying to join Jack McKeon (Marlins, 2003) and Bob Lemon (Yankees, 1978) as the only managers hired in midseason to win the title. To the 59-year-old Thomson, it's not such a surprise his team is in this position.

"Coming out of spring training ... we knew we had a good ballclub. We knew our bullpen was good, rotation was good, we had great offense," he said earlier in the playoffs. "We just got off to a little bit of a slow start and kind of spiraled."

"And we had ups and downs during the season, just like any other club does. But they knew that they were going to come out of it at some point and start winning again. And we did," he said.