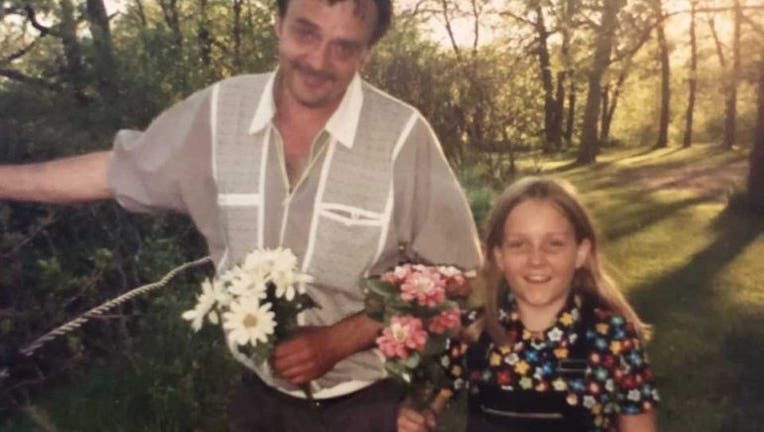 My dad cried every time he spoke to me. Every. Time.

He was prone to tears.

Tears of happiness. Tears of laughter. And, most often, tears of pride. I think I got that quality from him.

I cry over the simplest things. Inspiring commercials. Uplifting viral videos. I laugh until I cry – often.

Tears of sadness, however, were the hardest to get out of my father. And out of me as well.

But when the call finally came – the call I’d expected for so long – I wept.

Yes, I was sad. But more than anything, I think they were tears of relief.

My dad, John Wayne Patrick Bunnell, died Sunday, May 5, of an aneurysm. He was alone in his bed in the Fort Frances, Ontario, motel room he’d called home from for the last several years.

Truthfully, I expected his death to come much sooner.

My dad had many vices, but alcohol was the most consistent.

My strongest memories of him involve alcohol.

When I was in grade school, I would either wake up to light seeping under my bedroom door – or to complete darkness. A light on in the kitchen meant my dad was awake. He was making breakfast. He was going to see us off to school. Darkness meant he was still sleeping. He’d been up late drinking. And he’d start drinking again as soon as he woke up, which would be sometime in the afternoon.

When I was in high school, my dad would regale my older brother’s friends with his drinking prowess. He’d prod them into doing “chilly willys” – where you’d pour a bit of vodka in the palm of your hand and sniff it up your nose. He’d of course demonstrate this to them first.

When I was in college, my dad started sending me letters. Sad letters. One talked about suicide. I recently reread it while packing up things in my apartment for a move. He said he thought about killing himself “every hour of every day” (Talk of suicide was not new for my father. When I was younger, I remember trying to hold our front door on the farm shut as my dad tried to open it. He wanted to get his shotgun from the detached garage to kill himself. I was in tears, begging him to stop as he tried to pull the door open with all his might. Luckily, he was drunk and stumbling. It made my task easier).

Near the end of my time at the University of Nebraska, my dad sent me a post card from Canada. It read “I miss seeing you and knowing how your life is going. I think of you many, many times a day, every day Brandi Isis.” The latter part of that postcard is tattooed on my arm – a reminder to myself never to forget how much my dad loved me, despite his shortcomings.

But even years after moving away from home, my dad’s alcoholism continued to impact my life.

When I moved to Seattle for work, my dad started calling the newsroom at KIRO Radio, the station I worked for early on in my career. He’d call in the middle of the night – you guessed it, drunk. After a few months of this, the overnight assignment editor told me a man kept calling for me claiming to be my dad.

“He sounded drunk,” my coworker said, dismissing the caller as some wacko pretending to know me.

But I knew the truth.

It was around that time that I stopped having pity for my dad.

I was an adult – determined not to let his behavior continue to impact my life and happiness. 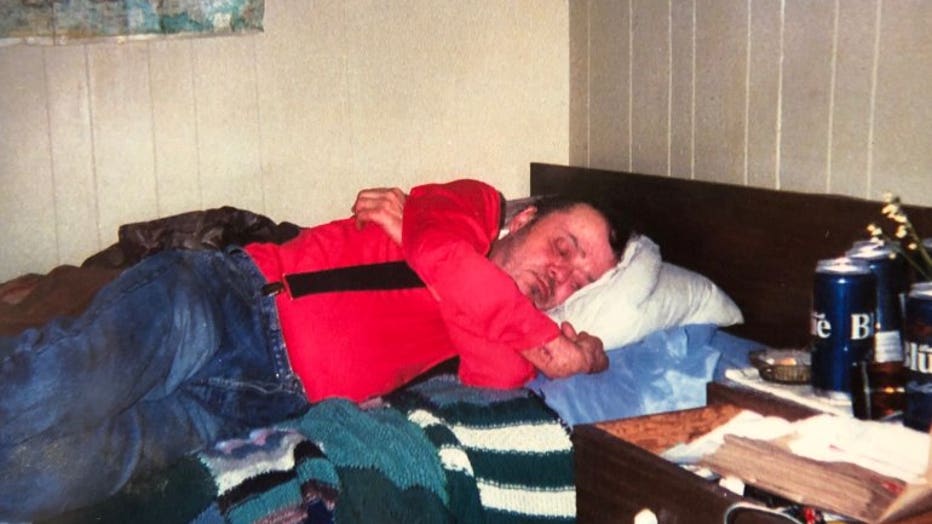 Brandi's father in his motel room.

As the years went by, I would get occasional updates about my dad from family and some of his close friends. His health deteriorated. His drinking continued. He had taken up residency in a cheap motel room along the border of Minnesota and Canada where he grew up. At some point, he was hit by a truck in a hit-and-run (as the story was told to me). He shattered his arms. He could barely walk anymore. He was living in constant pain. He told me the pain was like that sting you feel when you hit your elbow – except all over his body, all the time.

I decided to visit him about three years ago after hearing that his health was declining rapidly. I didn’t want to live with the regret of not having said goodbye.

I booked a hotel room in International Falls, Minnesota, just across the border from where my dad was living. We arranged to meet down in the lobby for a continental breakfast.

My dad burst into tears as I walked in. Not sad tears. Happy tears. Tears of pride. He hadn’t seen me in years and, admittedly, I was his favorite child growing up.

“Brandi Isis,” he said through his sobs (he gave me that middle name and all my life called me by the two names together. “Brandi Isis.” (My dad had a penchant for choosing unusual names. My older sister’s first name is Miranda after “Miranda v. The State of Arizona” – the Supreme Court ruling that forces police officers to read you your rights before questioning).

I was glad to see my dad that day. I was convinced it would be the last time. I wanted to make it count.

But even on that day, the first time he’d seen his youngest daughter in years, my dad was drunk. So drunk that he sat on a whole tomato – a GIANT red, ripe tomato that my mom had picked from her garden and mistakenly left in the backseat of her car. It wasn’t the fact that he sat on the tomato that was the problem. It was the fact that he hadn’t even realized it. He started walking back across the border after our visit – a small bottle of vodka shoved in one back pocket, and a giant red tomato stain covering the other.

For better or worse, I try to remind myself that I owe who I am, in part, to my father.

I decided I wanted to be a journalist in the 6th grade because of him. Things were worse at home than ever before. But when the evening news came on each night, those 30 minutes were my escape. I dreamt of being where those reporters were – anywhere but where I was.

So why do I tell you all of this?

My biggest regret about my father’s death is the time his addiction stole from us and from him.

It consumed almost his entire life. And it consumes my memories of him.

On his sober days – the days when the light would seep under my bedroom door in the morning as a kid – my dad was magnificent.

He was smart. Smarter than anyone I’ve ever met. Chalk full of random facts and captivating stories. Witty one-liners. He was engaging and funny. He was generous with his time and with what little money he had. He was wholly unique. Not a soul like him on the planet.

But that dad was stolen from me – piece by piece, year by year, drink by drink.

I know there is someone reading this who needs to know what I’m about to tell them:

It is never too late to be the parent your children deserve.

It is never too late to be the person your loved ones know you can be.

It is never too late to live the life you were meant to live.

It is never too late to build new memories that will help make up for the old ones.

Today is the day. Not tomorrow. Not next week. Not next year.