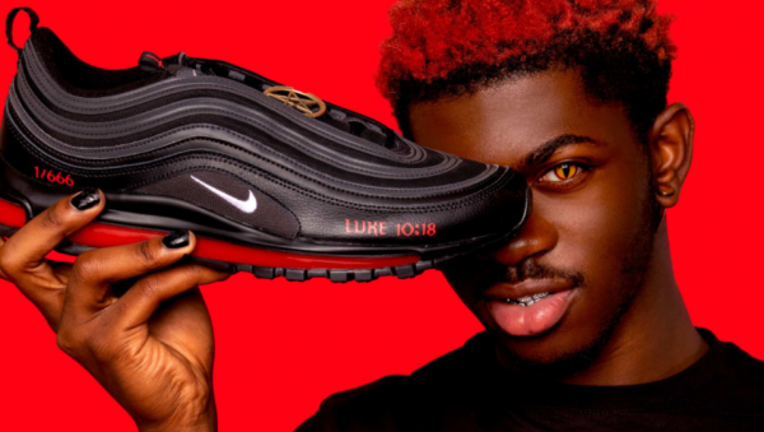 The so-called "Satan Shoes," made by the company MSCHF to promote a song by rapper Lil Nas X, will sell for $1,018 a pair. (Photo credit: MSCHF)

Yes, the idea of putting a drop of human blood in sneakers is weird.

Yes, sliding into hell on a stripper pole and giving a lap dance to the devil is bizarre imagery.

Yes, some people (namely Christians and conservatives) are upset about all of the above.

But backlash be damned, rapper Lil Nas X refuses to become a victim of cancel culture.

I, for one, applaud him.

The controversy surrounding Lil Nas X’s new song MONTERO ("Call me by your name") – and the 666 pairs of custom Nike Air Max 97’s he’s selling to promote it – have proven one thing without a doubt: The right likes cancel culture just as much as the left.

He was accused of deliberately interrupting the Holy Week.

Republican Gov. Kristi Noem called it "a fight for the soul of our nation."

Pastor Greg Locke called it "devil-worshipping wicked nonsense" that he simply would not stand for.

But if you’re hoping to shame away the Satan song, you’re about to be disappointed.

Unlike so many who respond to internet outrage by folding, Lil Nas X is doubling down – making a mockery of a culture that too often forces people to acquiesce.

RELATED: Cliff Mass on being hit by cancel culture

He posted a fake apology video.

He celebrated criticism from FOX News.

And all the while, he gleefully promoted his music, racked up views, and refused to back down from his creative (albeit odd) vision.

Is there still time to bow to the pressure? Sure. After all, Lil Nas X faces a very real lawsuit from Nike, which is suing for copyright infringement. Apparently, the company did not sign off on the use of its shoes in the promotion.

So does he seem concerned?

"I’ll be honest all this backlash is putting an emotional toll on me," Lil Nas X posted on Twitter. "I try to cover it with humor but it’s getting hard. My anxiety is higher than ever and stream 'Call me by your name' on all platforms now!"