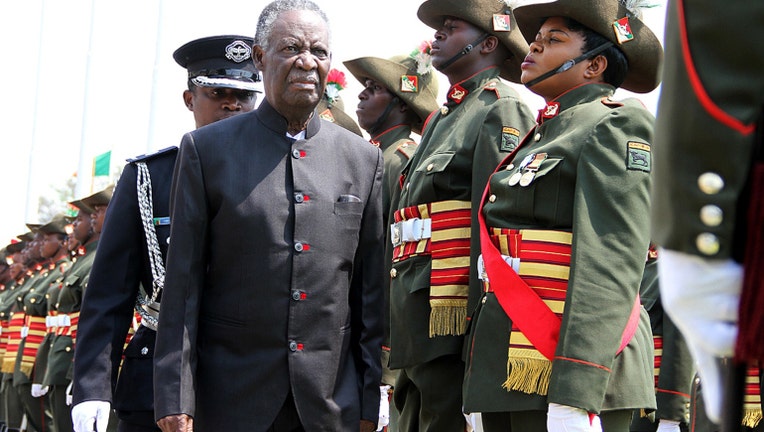 Zambia's President Michael Sata (L)) reviews a guard of honour outside the National Assembly building before officially opening the Zambian Parliament on September 19, 2014 in Lusaka.

(CNN) -- Zambian President Michael Sata, who was nicknamed "King Cobra" for his fiery comebacks and larger-than-life personality, has died. He was 77.

Sata had traveled to London for unspecified medical treatment last week, and died at a hospital there Tuesday evening. Officials did not disclose a cause of death.

"It's shocking, it's devastating, because I knew he was sick. But I did not know it was going to end this way," said George Zulu, permanent secretary at the Zambian Ministry of Foreign Affairs. "(We) lost a man who devoted his whole life to his country."

He will serve for 90 days until elections are held for a new president. Scott, who is of Scottish descent, will be the first white head of state in sub-Saharan Africa since apartheid.

He is ineligible to be elected president because his parents were not born in Zambia, Msiska said.

Before Scott, Defense Minister Edgar Lungu was appointed as acting president when Sata left for London.

Sata took office in September 2011 after the incumbent President tearfully conceded in a televised speech, a rarity in a continent known for volatile elections and leaders fighting their defeat tooth-and-nail.

Analysts hailed his election as an example of an African nation with a vibrant democracy. But not too long after he took office, speculation swirled over his lack of visibility -- which especially stood out for a man who loves the spotlight.

Aides said his absence was a result of private international visits, and maintained those trips had nothing to do with medical treatment.

The nation's bloggers have frequently criticized what they describe as "absence of leadership," leading Sata to make a surprise appearance in parliament last month and declare that he was not dead.

Sata was born in the Zambian town of Mpika in 1936, and worked as a police officer during the colonial administration. He later trained as a pilot in Russia before returning home and helping develop housing projects in the nation.

During Zambia's struggle for independence from Britain, he jumped into politics, and later founded the Patriotic Front -- then an opposition party. His campaign events electrified crowds drawn to his extroverted nature and fight for the average man.

Sata, who narrowly lost to his predecessor Rupiah Banda in 2008, was a major critic of Chinese investment in the nation's copper industry. He especially targeted foreign companies that mistreated Zambian workers, making him popular among the nation's miners who accused the Chinese of deplorable work conditions.

While in office, Sata warned foreign companies that while their investment is crucial to his nation, they must abide by the labor laws.

The veteran politician has served in other positions, including city council, member of parliament and Cabinet minister for local government.

Before his election, the copper-rich nation in southern Africa had been ruled by the same party for two decades.

De Klerk took a deputy position in the new government for two years.