SEATTLE  --  The idea was simple enough; one of giving back during the holiday season. Nineteen-year-old college student, Danni Messina, planned to do just that, with one simple tweet, pledging money to St. Jude Children’s Hospital; based on how many favorites and retweets she collected.

What she wasn’t counting on was the power of social media and how one simple pledge can turn into an endless allegiance of kindness. 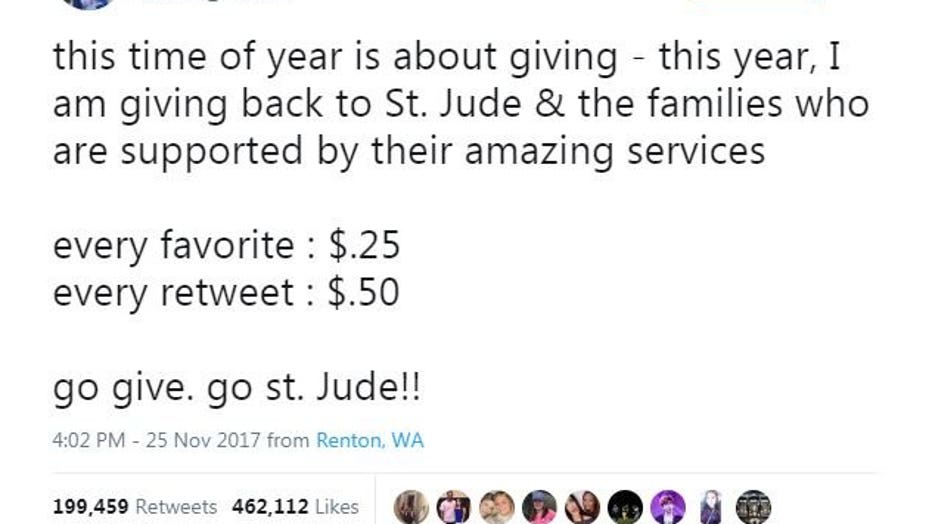 “It just kept going up and up and, yea, I really did have that moment of omigosh what do I do,” says Messina.

Messina says she had no idea a simple tweet would go so viral so fast.

Messina says she was inspired to raise the money after a friend spent Thanksgiving in the hospital with a family member.

“I realized that is a reality for a lot of people and for a lot of families. These kids are in this amazing place. They are at St. Jude’s, but also they are there for a holiday),” says Messina.

Feeling inspired, she took to Twitter and announced to her then, 600 followers, that she would donate 25 cents per favorite and 50 cents per retweet.

Suddenly, those favorites and retweets really started to add up; hundreds of thousands of them. And a slew of a thousand new Twitter followers, too, translating to roughly over $200,000 -- far exceeding this college student's expectations and $1,000 budget.

“They kept on sharing and I think that was the craziest part of it, like whoa, this many thousands of people saw this tweet and it went viral,” says Messina.

A little overwhelmed by the response, but staying true to her promise, Danni created a Gofundme page. She set a goal for $50,000 and surpassed that number within three days thanks to the generosity of over 800 people.

“It’s like it doesn’t even seem real to me like how it all happened. Hitting the goal today, I called my mom and we both started crying,” says Messina.

“My dad used to say good karma always comes back around, so I’m sticking to that for sure,” says Messina.

At St. Jude Children’s Research Hospital we sincerely appreciate the awareness that Danni Messina and her Twitter campaign effort have brought to our mission: Finding cures. Saving children.®

Danni’s intentions are pure – and while she has learned a lesson on how quickly a moment can become viral, she also reminds us of the power and importance of helping others and how contagious that spirit is in this season of giving thanks.

With our long-standing partners such as Kmart, Tri Delta and others, who over the years have demonstrated extraordinary commitment and generosity, we are working to enable Danni to fulfill her beautiful intentions to help the kids at St. Jude.

On this #GivingTuesday, St. Jude Children’s Research Hospital is grateful for the giving spirit demonstrated by millions of big-hearted people like Danni who help make it a reality that no family will ever receive a bill from St. Jude for treatment, travel, housing, or food.