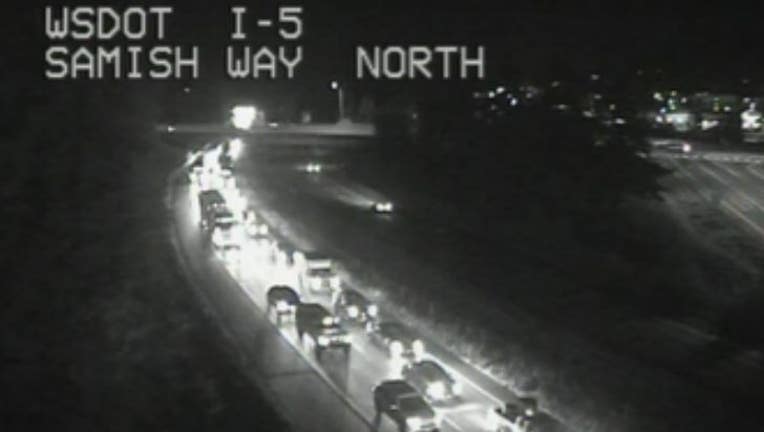 BELLINGHAM, Wash. - Police are looking for a hit-and-run suspect that caused a crash that ended up killing a motorcyclist in Bellingham Thursday night.

According to the Washington State Patrol (WSP), troopers responded to a crash on northbound I-5 near Lakeway Dr. at around 9:00 p.m. When authorities arrived, they found a 45-year-old Ferndale man dead at the scene.

Two drivers involved in the crash stayed at the scene, and after speaking with them, the WSP learned the driver that started the crash drove away.

After investigating, the WSP learned that the suspect driver was traveling alongside the motorcyclist on northbound I-5 when the two collided. The man was thrown off his bike, landed in the middle of the street and the driver took off in an unknown direction.

One of the drivers that stayed at the scene say they pulled over to the left-hand shoulder to check on the victim.

The other driver that stayed told WSP that they saw an uninvolved car pulled over on the right-hand side of the road with its hazard lights on, so they switched lanes. As they were switching lanes, they struck the victim head-on and crashed into the car that initially pulled over.

The two drivers at the scene were uninjured.

WSP troopers had to close the lanes in order to investigate the crash scene.

At this point of the investigation, WSP officials have little to no information about the hit-and-run suspect.