OLYMPIA -- State Department of Transportation crews don’t know if a steel pipe found in Bertha, the Seattle tunneling machine, is the only object blocking its path, but if it is, the agency says the cost of the delay should not be passed along to taxpayers.

It’s a question many are asking as an $80 million tunneling machine sits paralyzed underground. 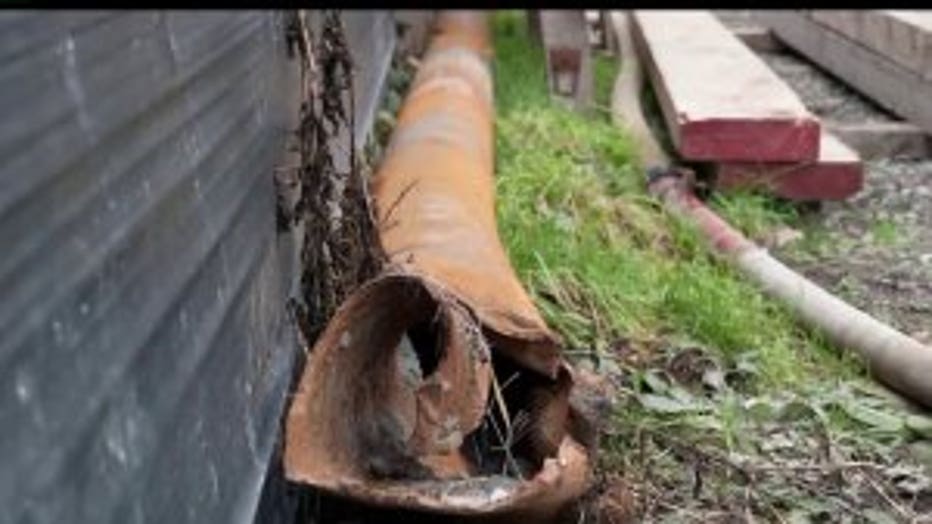 This is part of the eight-inch pipe that was found in Bertha's cutterhead on Jan. 2, 2014.

“What might the future hold here if everything goes bad and that machine does not move?” asked state Sen. Tim Sheldon, D-Potlatch.

“There’s been a lot of frustration on what is taking so long; it seems like weeks have ticked by,” WSDOT project administrator Todd Trepanier said.

A long steel pipe planted underground by WSDOT in 2002 and recently found in the tunneling machine could be the main reason Bertha is stuck.

Bertha has been stalled since Dec. 6. Crews working to determine what stalled the machine found a 8-inch diameter steel pipe protruding through one of the machine's many openings in the cutterhead Jan. 2.

“Every contractor that bid on this project was aware of the location of the pipes and wells,” state Transportation Secretary Lynn Peterson said.

Peterson says the location of the pipe was communicated to the contractor, Seattle Tunnel Partners, so the state should not have to pick up the tab for the delay.

“The risk is more on the contractor than the state taxpayer,” Peterson said.

Earlier, Peterson sent a memo to lawmakers addressing the project’s problems, even mentioning the possibility of a future lawsuit against the contractor.  But on Thursday, she was focused on finding what went wrong.

“What we are doing is working with our contractor very closely to make sure that we can determine why she wanted to stop, why all the warning lights came on,” Peterson said. .

WSDOT is hoping crews sent underground in a hyberbaric chamber can pinpoint the exact holdup,  but it’s a dangerous and slow process.

“It’s a very big deal to put people in front of a drilling machine underground under high pressure,” Peterson said.

As the work continues, some lawmakers needed to be reassured that all the construction wouldn’t jeopardize the traffic on the Alaskan Way Viaduct.  Bertha is digging the tunnel that will eventually replace the aging viaduct.

“I was starting to get agitated up here. I am wondering if you are absolutely 200% sure that we are not going to be collapsed upon, or cave into anything,” state Sen. Christine Rolfes, D-Poulsbo, said.

WSDOT says the tunnel is safe.

“The vulnerability of the viaduct itself, that is a question we continue to watch it ... To get folks off the top of the viaduct and out from underneath as fast as possible is very important,” Trepanier said.