I-5 in Seattle at a standstill after deadly crash

Hours after a deadly crash was reported, traffic was still backed up and slow moving in both directions

The Washington State Department of Transportation (WSDOT) is warning people in the Puget Sound to prepare for an especially busy travel weekend, due to construction and several major local events.

On Friday, WSDOT sent out a tweet calling for residents of Seattle and Tukwila to be aware that this weekend will be on of the first busy construction and maintenance periods of the year. In addition, WSDOT included a map revealing every local event and construction project that will likely create slow moving traffic issues on area roadways. 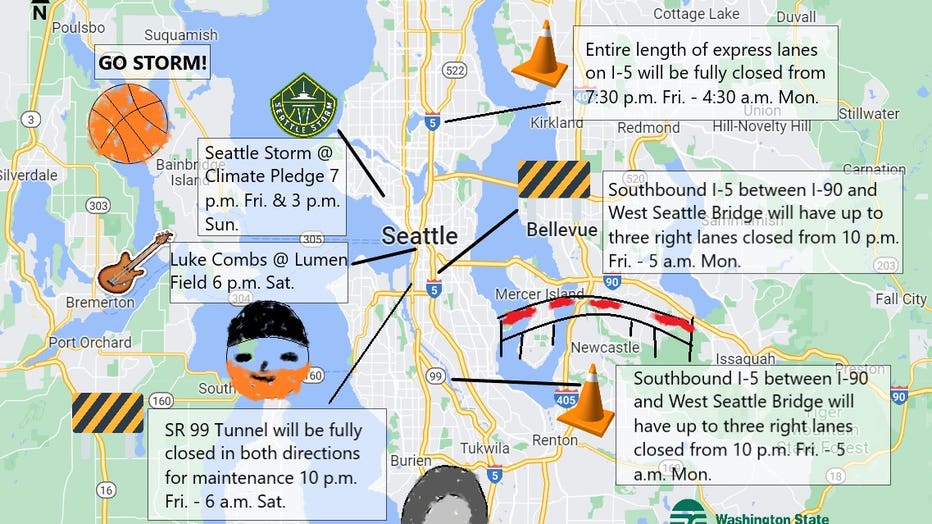 "#Seattle and #Tukwila: this weekend will be one of the first busy construction & maintenance periods of the year. Combine that with several local events and we felt we needed to bring back the Paint Map™" - @WSDOT Traffic (Twitter) (Washington State Department of Transportation)

WSDOT is asking that drivers give themselves plenty of time to reach their destinations this weekend as traffic will likely be slow moving. In addition, drivers are encouraged to seek alternate routes to avoid congestion and other traffic-related frustrations.

RELATED: Revive I-5: Lane closures start in Seattle for up to 16 weekends to replace expansion joints

Revive I-5: Weekend lane closures return for up to 16 weekends

The Washington State Department of Transportation says its "Revive I-5" project will cause weekend lane closures for up to 16 weekends this summer.