More and more people are coming out for winter activities, but they are doing so in an unsafe way.

SNOQUALMIE, Wash. - As more and more people head to the mountain passes for winter recreation, the Washington State Department of Transportation (WSDOT) said the increasing crowds are bringing a new hazard to the passes.

WSDOT said with the rising popularity of these spots, people have started parking on and walking on roadways at the passes.

Cars enter and exit at high speeds, putting pedestrians at serious risk. Bulky snow gear can obstruct a person's view of vehicles around them, WSDOT said.

"This is a tragedy waiting to happen – just as it was this summer when we saw similar practices. Now, however, we have lower visibility and snowy/icy roads in play as well – and we've already seen close calls in areas," WSDOT said in its blog.

It's also important to remember not to sled on hills that lead to roadways, as there's a high risk that sledders can shoot out into open traffic.

The cars parked on the shoulder also prevents crews from clearing the roadways and passes.

On Snoqualmie Pass, plows couldn't make it into storage areas for additional salt and supplies recently due to vehicles parked on shoulders and blocking access, WSDOT said. The department said that even in some cases, there wasn't enough room to turn around a plow because people decided to turn roadways into parking lots.

"Vehicles parking along the shoulder also slow down traffic and increase the risk of crashes as passing vehicles have to maneuver through the now-narrowed area. That's the last thing we need during busy travel times or winter weather," WSDOT said.

Vehicles in violation will be ticketed, but Washington State Patrol does not have enough staff for such widescale enforcement. 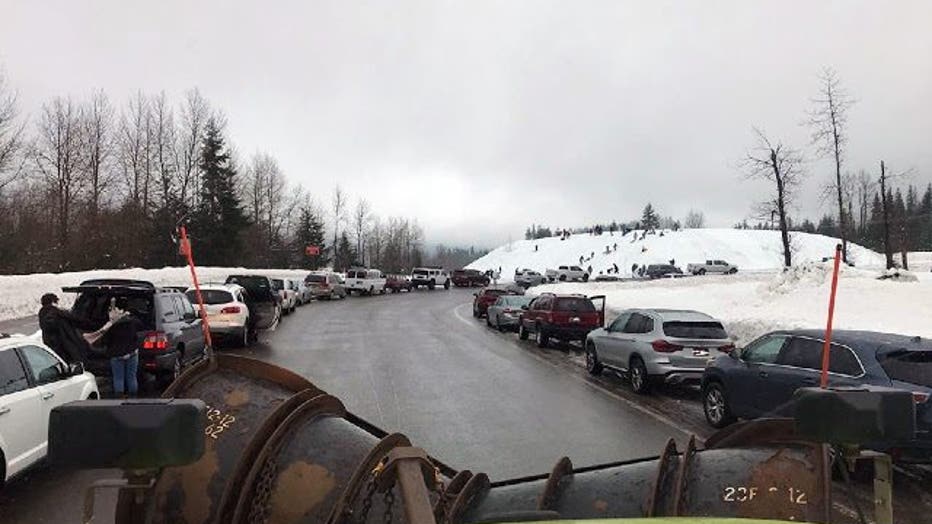