(CNN) -- A World War II German U-boat, sunk during the Battle of the Atlantic more than 72 years ago, has been discovered off the coast of North Carolina, the National Oceanic and Atmospheric Administration announced Tuesday.

The German sub, the U-576, was found at the bottom of the Atlantic 30 miles off Cape Hatteras and just 240 yards from an American merchant ship, the merchant tanker Bluefields, which was part of a 24-ship U.S. convoy heading from Virginia to Key West, Florida, on July 14, 1942.

"This is not just the discovery of a single shipwreck," said Joe Hoyt, chief scientist of NOAA's Office of Marine Sanctuaries expedition, which found the vessels. "We have discovered an important battle site that is part of the Battle of the Atlantic. These two ships rest only a few hundred yards apart and together help us interpret and share their forgotten stories."

The story of U-576 was is the more tragic of the two wrecks.

Bluefields did not sustain any casualties during the sinking, but all 45 crew of the U-boat were lost. 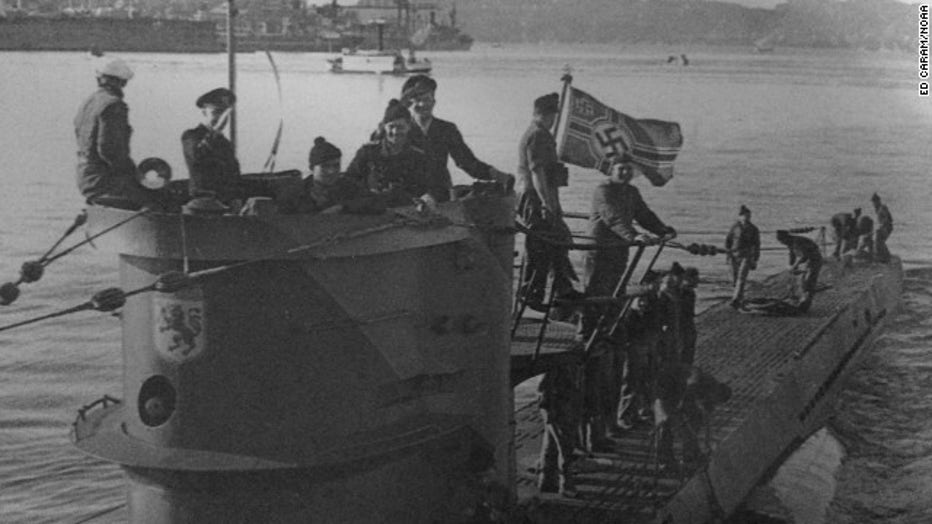 Crew members are seen on a German U-boat, the U-576, in this undated photo released by the National Oceanic & Atmospheric Administration. The submarine was sunk during World War II more than 72 years ago, and its remains were recently found off t

Commanding U-576 that July day was Kapitanleutnant Hans-Dieter Heinicke. According to documents from the Monitor National Marine Sanctuary, where the wrecks rest, Heinicke had radioed back to commanders in occupied France on July 13 to say the U-boat was damaged and heading back to Germany after a month-long patrol without success against Allied shipping.

A U-boat and its American prey haunt Gulf of Mexico

As U-576 began that journey home, it ran across convoy KS-520, with 19 merchant vessels and five escorts, on the afternoon of July 14, according to the documents.

Heinicke, who was on his fifth U-boat patrol with relatively little success against Allied shipping, saw a chance for redemption.

"In spite of his damaged ship, Heinicke decided to attack at all costs," a history from the sanctuary reads. "However, at 4:00 pm just before he could fire his torpedoes, one of the Coast Guard cutters picked up a sonar contact. The Coast Guard crew dropped three depth charges, followed by five more 10 minutes later."

But Heinicke pressed his attack, firing off four torpedoes about 4:15 p.m.

"The U-576 sank the Nicaraguan-flagged freighter Bluefields and severely damaged two other ships. In response, U.S. Navy Kingfisher aircraft, which provided the convoy's air cover, bombed U-576 while the merchant ship Unicoi attacked it with its deck gun," the NOAA release reads. The sub sank in minutes.

Two NOAA research vessels, the Okeanos Explorer and SRVX Sand Tiger, participated in the search for the wrecks, which were found and verified in August, NOAA said.

The wreck site is considered a war grave and protected by international law.

"Few people realize how close the war actually came to America's shores," David Alberg, superintendent of NOAA's Monitor National Marine Sanctuary, said in a statement. "As we learn more about the underwater battlefield, Bluefields and U-576 will provide additional insight into a relatively little-known chapter in American history."