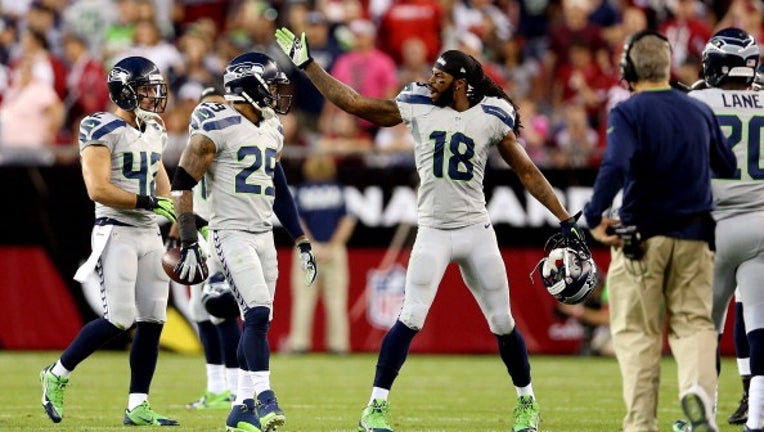 Wide receiver Sidney Rice #18 of the Seattle Seahawks reacts after a defensive penalty against the Arizona Cardinals during a game at the University of Phoenix Stadium on October 17, 2013 in Glendale, Arizona. (Photo by Christian Petersen/Getty Image

SEATTLE -- Wide receiver Sidney Rice is coming back home to the Seahawks, about seven weeks after he was released in a salary-cap move, the team announced Wednesday.

Media reports said the deal is for one year, for an undisclosed amount of money.

Rice spent Wednesday visiting with the New York Jets, but in the late afternoon he tweeted: "Aaayyyoooo 12s... SEA you in a few ... IM COMIN' HOME!" (his tweet is below)

Minutes later, ProFootballtalk.com, citing a league source, was the first to report that the 27-year-old Rice had agreed to a one-year deal to return to the Seahawks.

Quarterback Russell Wilson later issued a one-word tweet of his own: "YESSSSSSSS!!!!!!"

Only two days before, Rice had tweeted that he has been medically cleared to play football after surgery to repair his ACL injury.  Since he had been cut earlier this year by the Seahawks, he was free to sign with any team.

It was on Oct. 28, 2013, in Seattle's game against the St. Louis Rams, that Rice tore his ACL, putting him out for the remainder of the season. On Feb. 28, Rice was released by the Seahawks, along with Red Bryant, which saved the Seahawks $12 million in cap space for the upcoming season.

The Seahawks signed Rice to a five-year, $41 million deal before the 2011 season. Rice's best season in Seattle came in 2012, when he caught 50 passes for 748 yards and seven touchdowns. Rice caught 15 passes for 231 yards and three touchdowns in eight games last season.