The same prices were good on select flights from San Francisco International Airport, according to a news release.

WOW is also offering one-way tickets from Miami, Boston and Washington D.C. to Reykjavik for $99.

Tickets went on sale Tuesday, and the website showed there were still seats available for select destinations as of 2 p.m. The fares are good for flights from Jan. 15, 2017, to April 5, 2017. 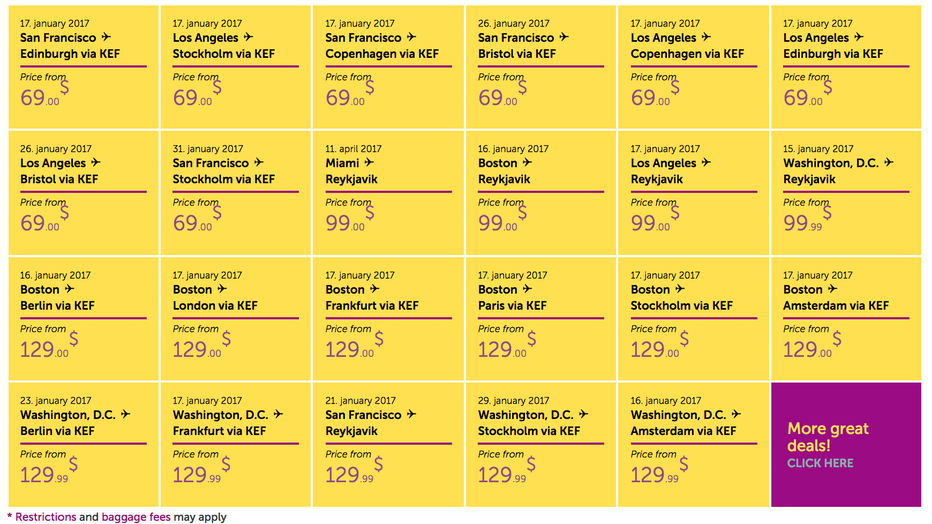 Return flights appeared to be at regular rates, with a ticket back from Edinburgh, for example, costing between $199.99 and $219.99, the website showed.

"WOW air's goal is to enable everybody to fly by offering the lowest fares on the market," Skúli Mogensen, the airline's founder and CEO, said in the release. "It's exciting to be driving change in the industry and to stimulate the market by offering these super low fares across the Atlantic.  I am very proud that by offering $69.99 USD fares we are enabling thousands of people to travel that otherwise could not afford it."

The airline, which launched in November 2011, connects 31 destinations across the U.S. and Europe with Reykjavik, Iceland's capital, the release stated.