How is the soccer ball for the World Cup chosen? What role does science play? Eric Goff, a physics professor at University of Lynchburg, spoke with LiveNOW from FOX's Josh Breslow about how science can make or break a match.

DOHA, Qatar - Keysher Fuller scored in the 81st minute to lift Costa Rica to a 1-0 victory over Japan on Sunday, leaving both teams with three points after two games in Group E of the World Cup.

Fuller took advantage of a defensive error when Japan failed to clear the ball and hit the net from 18 meters just off the fingertips of leaping Japan goalkeeper Shuichi Gonda.

The match at Ahmad Bin Ali stadium was tactical and largely lackluster, particularly in a first half that did not yield a single shot on goal. The second half was slightly better with Japan pressing throughout until Costa Rica broke through.

Costa Rica keeper Keylor Navas came up with several rapid fire saves in the final minutes to ensure the victory.

Japan has one Group E game remaining with Spain, and Costa Rica faces Germany in its final group match. With a victory, Japan could have all but wrapped up a place in the knockout stage after a 2-1 upset of Germany in its opener. Costa Rica was pounded by Spain 7-0 in its first game and just trying to survive.

Japan had the edge in corners, shots, and possession but could not find the net.

The first half might have been one of the worst of the tournament that has already seen four 0-0 draws. Neither team had a shot on goal in a tactical stalemate. 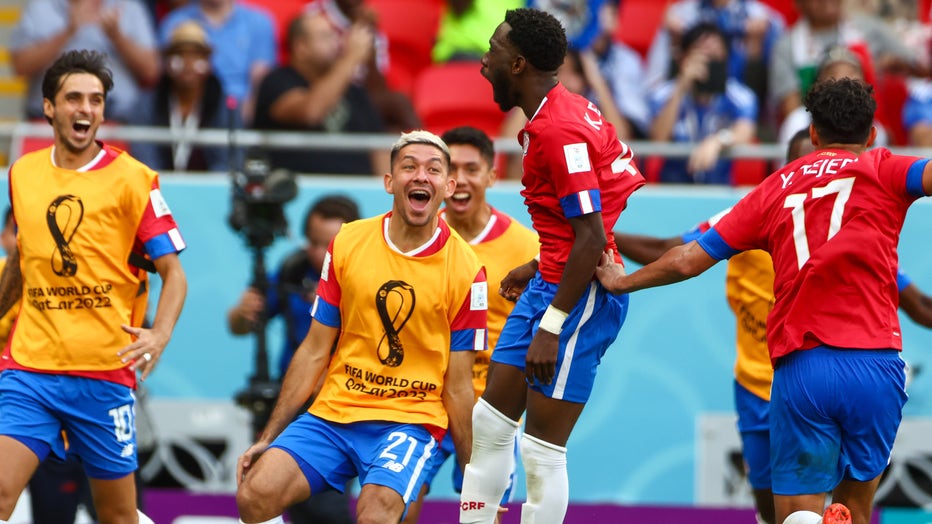 Ritsu Doan, who scored one of Japan’s goals in the 2-1 win over Germany, looked the most threatening early with runs down the right side looking to cut in crosses.

Costa Rica’s most menacing player always looked like Joel Campbell, trying to use his speed on the left flank.

There was more action in the first two minutes after the break than in the entire first half.

Hidemasa Morita tested Navas with a blistering shot in the first minute, and Takuma Asano forced another save a minute later.

Despite Japan's attacking intent, the late defensive error cost the team, which seemed headed for a draw and a valuable point.

Japan, which is appearing it its seventh straight World Cup, has reached the knockout stage on three occasions, losing each time in the round of 16. Costa Rica reached the quarterfinals in Brazil in 2014.

Japan may not win the World Cup, but it’s winning goodwill with its tradition of cleaning up fan areas and player dressing rooms after the match. This dates from Japan’s first appearance in the World Cup in 1998. This time Japanese team officials have arrived with 8,000 trash bags with thank-you greetings in Arabic, Japanese, and English.

Germany forward Niclas Füllkrug salvaged a 1-1 draw against Spain on Sunday at the World Cup.

The Germans still need to win their last group match to have a chance of advancing to the knockout stage. The four-time champions were eliminated in the group stage four years ago in Russia.

Germany will next face Costa Rica, which defeated Japan 1-0 earlier Sunday. Even a win may not be enough for the Germans, who are in last place in Group E and need the other result to go their way.

Germany has one point, two behind Japan and Costa Rica. Spain has four points and holds a big goal difference thanks to its opening 7-0 rout of Costa Rica. 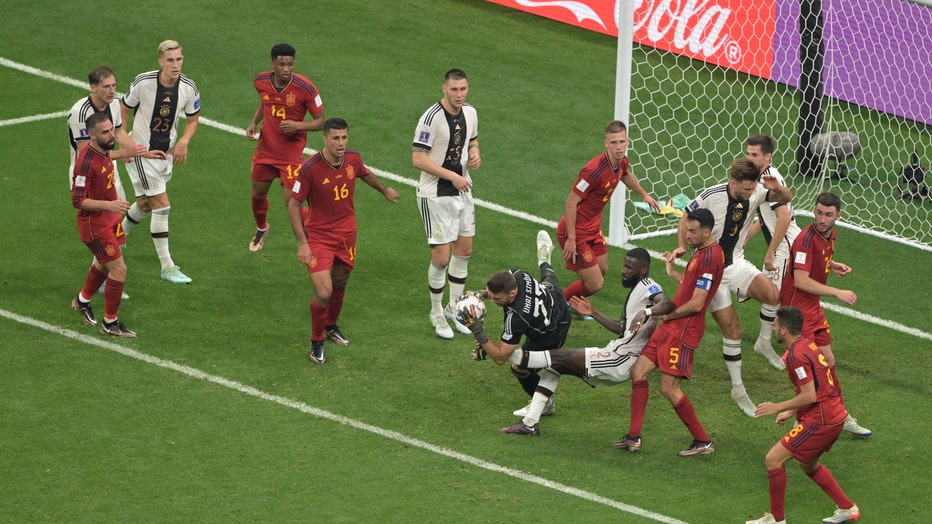 The match between the pre-tournament favorites was one of the most anticipated in the group stage.

Spain tried to control the pace of the game with ball possession but wasn’t able to create many significant opportunities until Álvaro Morata found the net in the 62nd minute with a nice one-touch from close range after a well-place low cross from Jordi Alba.

Germany struggled and only threatened sporadically in a few breakaways and set pieces, but Füllkrug finally found the equalizer in the 83rd with a shot from close range into the top of the net.

The goal kept Germany from enduring consecutive losses at the start of a World Cup for the first time. 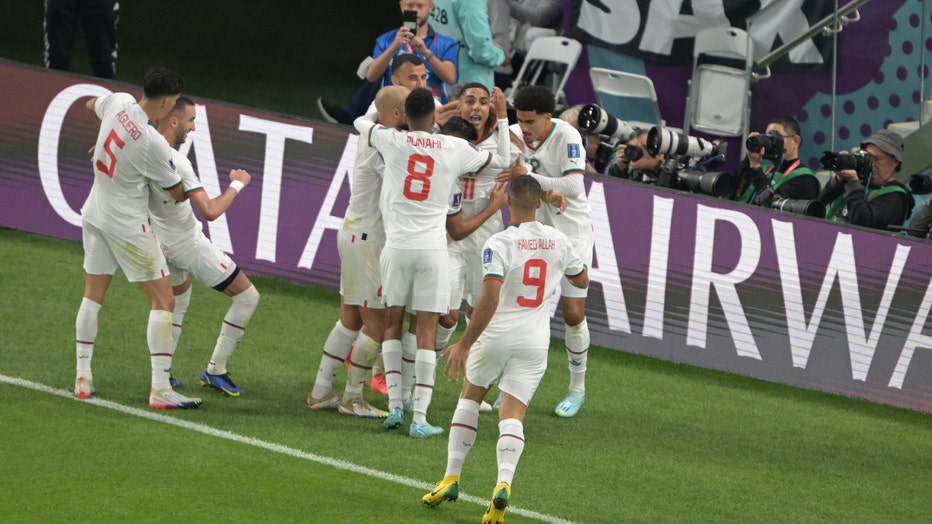 Players of Morocco celebrate after a goal during the FIFA World Cup Qatar 2022 Group F match against Belgium at Al Thumama Stadium on November 27, 2022 in Doha, Qatar. (Photo by Salih Zeki Fazlioglu/Anadolu Agency via Getty Images)

Morocco pulled off another shock at the World Cup on Sunday, beating Belgium 2-0 to leave Kevin de Bruyne and the 2018 semifinalists in peril of a group-stage exit.

Substitute Abdelhamid Sabiri got one past Belgium goalkeeper Thibaut Courtois by whipping in a free kick from a tight angle at the near post in the 73rd minute for Morocco's first goal. Zakaria Aboukhlal then guided a shot into the roof of the net off a pass from Hakim Ziyech in stoppage time.

Belgium, ranked No. 2 in the world behind Brazil, had won its last seven group games at the World Cup. It was Morocco's first win at a World Cup since 1998 and only its third ever.

Belgium would have become the second team after defending champion France to qualify for the knockout stage if it had beaten the Moroccans.

Belgium will next play 2018 finalist Croatia in its final group match, while Morocco will face Canada.

Canada eliminated from World Cup after 4-1 loss to Croatia 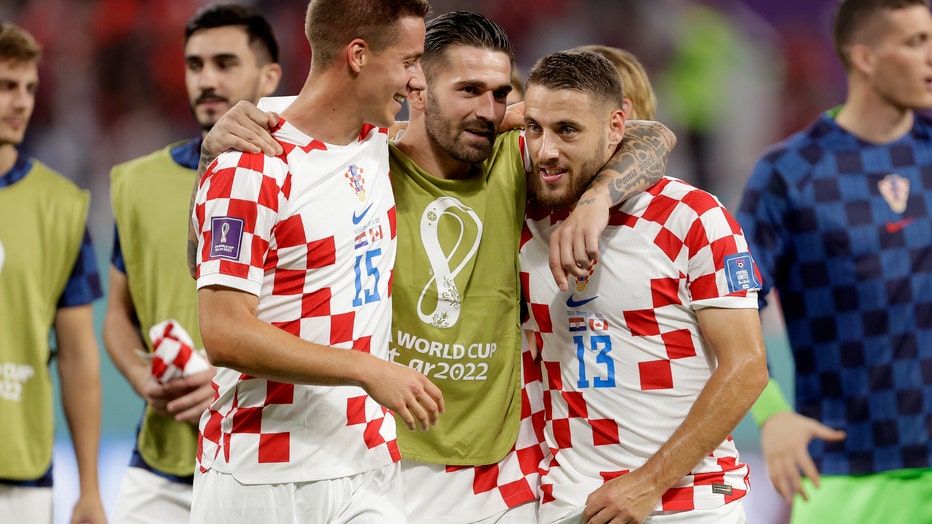 (L-R) Mario Pasalic of Croatia, Marko Livaja of Croatia, Nikola Vlasic of Croatia celebrating the victroy during the World Cup match between Croatia v Canada at the Khalifa International Stadium on November 27, 2022 in Doha Qatar (Photo by Eric Verho

Croatia bounced back strong and knocked Canada right out of its first World Cup in 36 years.

The 2018 runners-up got two goals from Andrej Kramaric on Sunday in a 4-1 victory over a Canadian team that has been eliminated after two matches in Qatar.

Alphonso Davies scored Canada’s first-ever World Cup goal one minute into the match but Marko Livaja and Lovro Majer also scored for Croatia, which lost to France in the final four years ago in Russia and opened with a scoreless draw against Morocco.

Luka Modric, the 37-year-old captain who runs the midfield for Croatia, is still looking for his first goal of the tournament in what is likely his final World Cup.

Croatia and Morocco, which caused another upset at this year’s tournament by beating Belgium 2-0 earlier Sunday, both have four points in Group F. Belgium has three points and still has a chance to advance.

Canada, however, earned no points from its first two matches and can’t advance even if it beats Morocco on Thursday in its final match. Croatia and Belgium will play at the same time.

Davies, who plays for Bayern Munich, headed a cross from Tajon Buchanan just out of goalkeeper Dominik Livakovic’s reach 1 minute, 8 seconds into the match. The goal had the swath of red-shirted Canadian fans chanting "Can-a-da! Can-a-da!" at Khalifa International Stadium.

"I am disappointed in the result. It was not easy," said Davies, who had a penalty saved in the opening loss to Belgium. "We did our best, we fought the entire game. We’re looking forward to the next game and hopefully we get some points."

Kramaric appeared to score another for Croatia in the 26th minute but he was ruled offside. His second chance counted about 10 minutes later, making it 1-1.

Livaja put Croatia in front with a blast from outside the penalty box in the 44th minute, Kramaric added his second in the 70th and Majer scored in stoppage time.

Canada opened the tournament with a 1-0 loss to Belgium. Afterward, coach John Herdman stirred a bit of controversy when he recounted his post-game message to his players, using the first letter of a profanity to describe how they would beat Croatia.

In response, Croatia’s coach hit back at his English counterpart the day before the match.

"This way of putting words together is not a sign of respect," Croatia coach Zlatko Dalic said. "The way we play, the way we behave and the way we respect all others are the reasons we are worthy of respect."

Canada was also eliminated in the group stage of the team’s only other World Cup appearance in 1986.

LINK: Get more on this story and other World Cup updates at foxsports.com.