DOHA, Qatar - Africa finally has a team in the World Cup semifinals, and so does the Arab world.

Morocco delivered a seminal moment in the nearly 100-year history of soccer's biggest tournament, beating Cristiano Ronaldo and his Portugal team 1-0 Saturday in another shocking result in the first World Cup staged in the Middle East.

While a tearful Ronaldo headed right down the tunnel — and maybe into international retirement — after the final whistle, Morocco's players tossed their coach in the air and waved their country's flag as they linked arms in front of celebrating fans.

"Pinch me, I'm dreaming," Morocco goalkeeper Yassine Bounou said. "Morocco is ready to face anyone in the world. We have changed the mentality of the generation coming after us. They'll know Moroccan players can create miracles." 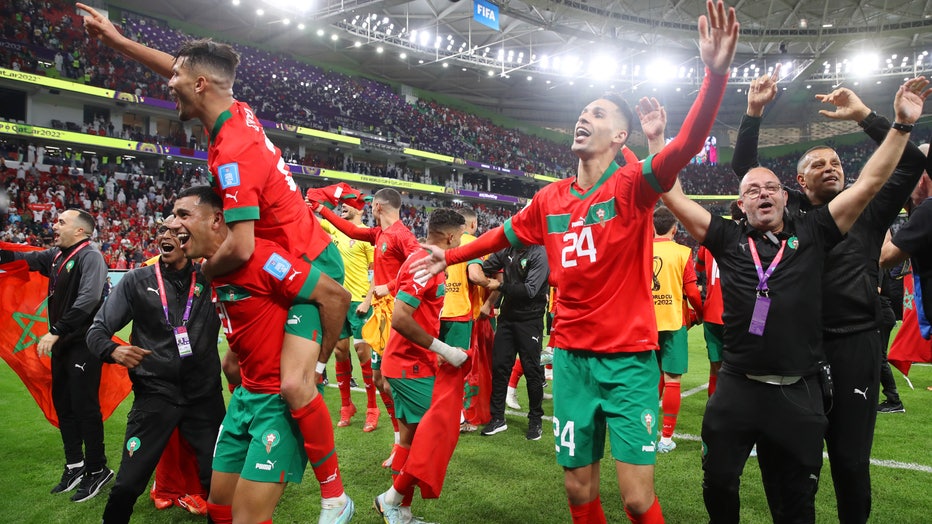 Youssef En-Nesyri scored the winning goal in the 42nd minute to continue an improbable run that has generated an outpouring of pride in the Arab world, inspiring displays in Arab identity from fans in different countries.

Africa is also rejoicing at finally having a nation advancing to the levels typically only reached by European or South American teams. Cameroon (1990), Senegal (2002) and Ghana (2010) all reached the quarterfinals but got no further.

Morocco has broken through, setting up a semifinal match against defending champion France.

The 37-year-old Ronaldo, one of soccer’s greatest players but now a fading force, didn't start for the second straight game and came on as a substitute in the 51st minute. He missed his only chance to equalize in stoppage time.

The five-time world player of the year is set to finish his career without capturing the World Cup or ever getting to the final. He walked right off the field after the final whistle, only briefly stopped by two Morocco players wishing to shake his hand and a spectator who confronted him near the entrance to the tunnel, and was crying as he headed to the locker room. 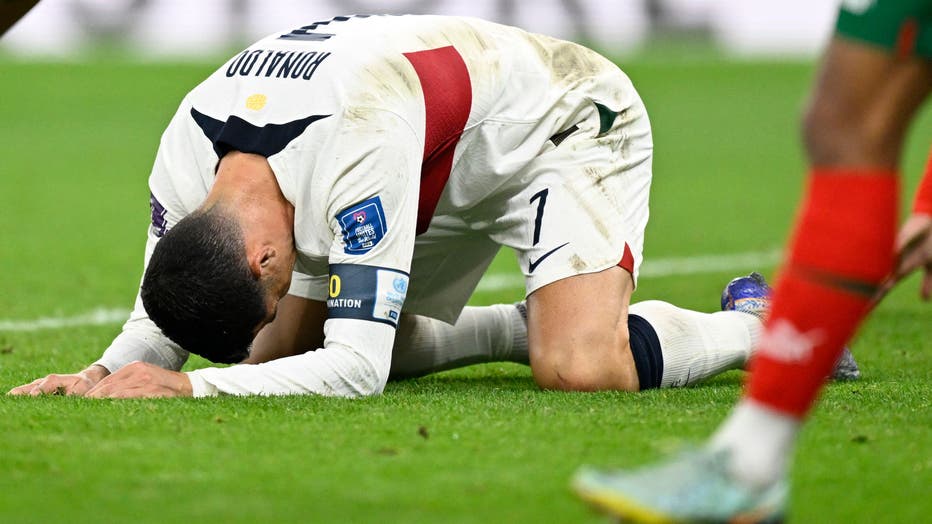 If this is the end for Ronaldo at international level, he'll finish with 118 goals — a record in men's soccer — and a European Championship title but not soccer's biggest prize. He only got as far as the semifinals at the World Cup, in 2006.

"Our players are distressed," said Portugal coach Fernando Santos, who shrugged off questions about his own future and added that he didn't regret not starting Ronaldo. "Cristiano is a great player and he came on when we thought it was necessary. But no, no regrets." 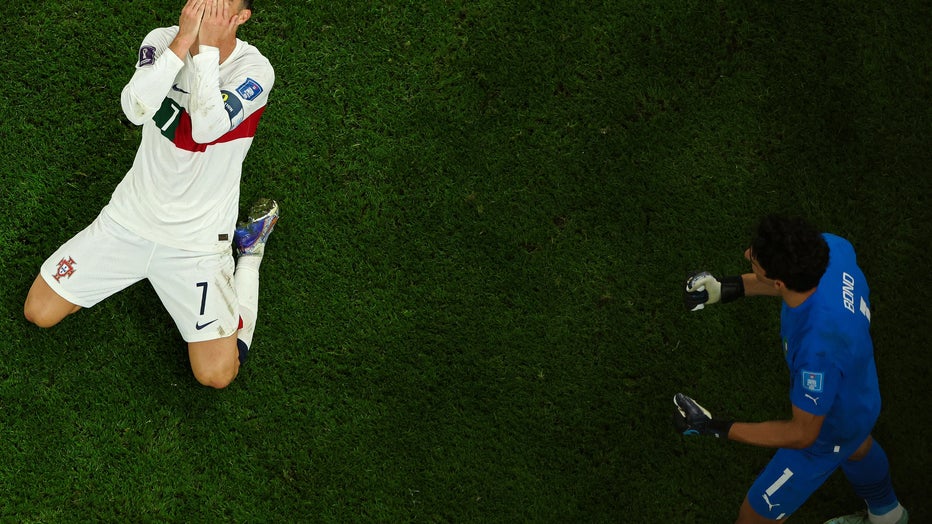 Cristiano Ronaldo of Portugal reacts after a missed chance during the FIFA World Cup Qatar 2022 quarter final match between Morocco and Portugal at Al Thumama Stadium on December 10, 2022 in Doha, Qatar. (Photo by Patrick Smith - FIFA/FIFA via Getty

There’s no reason why this Morocco squad — coached by French-born Walid Regragui and containing 14 players born abroad — cannot go all the way to the title. They topped a group that included second-ranked Belgium and fellow semifinalist Croatia and have now taken down two of Europe’s heavyweights in Spain — after a penalty shootout in the round of 16 — and Portugal in the quarterfinals.

"Why shouldn’t we dream of winning the World Cup?" Regragui said. "If you don’t dream, you don’t get anywhere. It doesn’t cost you to dream."

Morocco’s defense has yet to concede a goal by an opposition player at this year’s World Cup — the only one it has allowed was an own-goal — and it stifled a Portugal team which beat Switzerland 6-1 in the last 16 to thrust itself among the favorites.

In a game played to the backdrop of non-stop whistles and jeers by Morocco’s passionate fans, the team relied almost exclusively on counterattacks and scored from one of them.

A cross was swung in from the left and En-Nesyri leapt between Portugal goalkeeper Diogo Costa and defender Ruben Dias to head into the empty net.

LINK: Get updates and more on the World Cup at foxsports.com.

Ronaldo, who will be 41 by the time of the 2026 World Cup in the United States, Mexico and Canada, barely got a touch of the ball until stoppage time when he got in behind Morocco’s defense off a long ball forward. His low shot was saved by Bounou.

"I was afraid he might play," Regragui said of Ronaldo, "because I know he can score out of nothing."

Substitute Walid Cheddira was shown a red card for Morocco early in stoppage time for collecting a second yellow card in as many minutes.

After Portugal center back Pepe headed wide from inside the six-yard box in the sixth minute of added time, Ronaldo fell to his knees in dejection.

While Lionel Messi will be in the semifinals with Argentina, the other soccer great of this generation won't be. 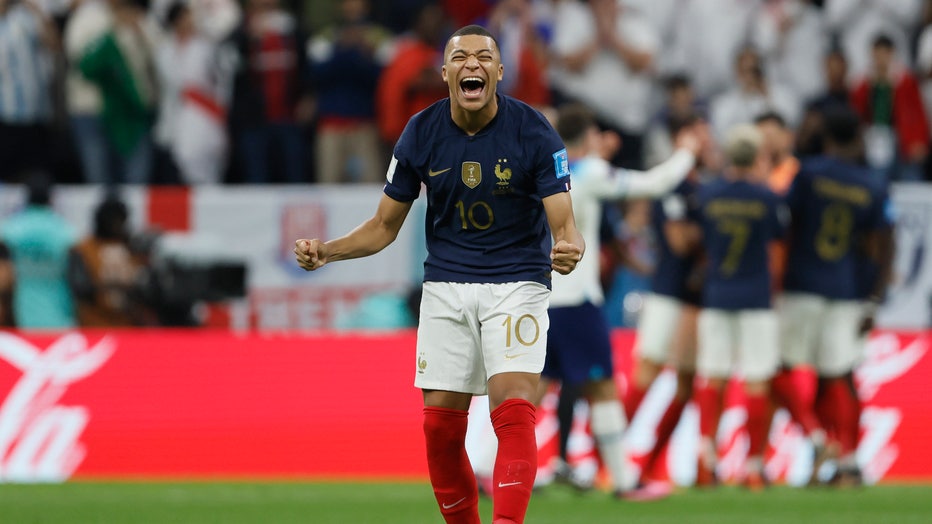 Kylian Mbappe and France made it back to the semifinals of the World Cup on Saturday by beating England 2-1.

Olivier Giroud scored in the 78th minute at Al Bayt Stadium to keep France on course to become the first team since Brazil in 1962 to win back-to-back World Cups.

Giroud raced away in delight when his header deflected off England defender Harry Maguire and sailed past goalkeeper Jordan Pickford.

England striker Harry Kane had a chance to even the score late in the match but he sent a penalty attempt over the bar.

It was his second spot kick of the match. He earlier scored to make it 1-1 after Aurelien Tchouameni had given France the lead in the 17th minute with a powerful drive from 20 meters (yards).

France will next face Morocco in the semifinals on Wednesday. The Moroccans became the first African team to reach the semifinals at the World Cup by beating Portugal 1-0.

England had been looking like the team more likely to score when the match was at 1-1. But instead it was Giroud who connected with Antoine Griezmann's cross to extend his record as France's all-time leading scorer to 53 goals.

The celebrations didn't last long, however, as referee Wilton Sampaio reviewed a challenge from Theo Hernandez on substitute Mason Mount in the box. The Brazilian official awarded the penalty. Kane sent Tottenham teammate Hugo Lloris the wrong way with his earlier penalty kick after Tchoumani brought down Bukayo Saka, but he lifted his next effort high over the bar.

England, which lost to Italy on penalties in the final of last year's European Championship, reached the semifinals at the 2018 World Cup.

After scoring 12 goals on the way to the quarterfinals in Qatar, England trailed in the match for the first time at the World Cup. It was also the first time the English team had conceded a goal since the opening 6-2 rout of Iran.

Kane's goal was his 53rd for England, moving him into a tie with Wayne Rooney for the most goals scored for the national team.