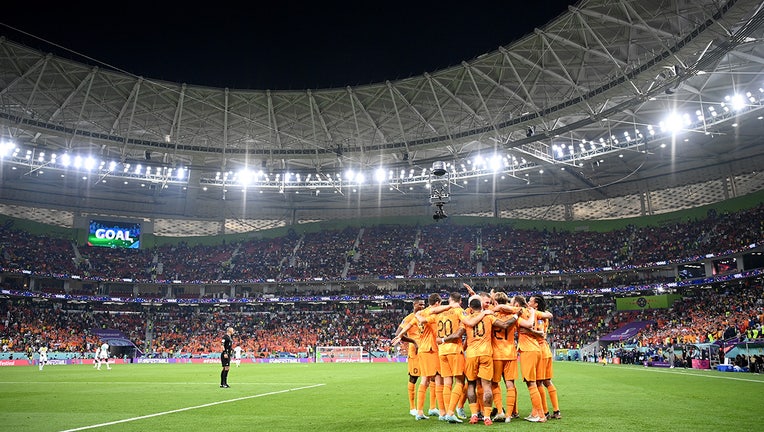 Netherlands players celebrate after their sides second goal during the FIFA World Cup Qatar 2022 Group A match between Senegal and Netherlands at Al Thumama Stadium on November 21, 2022 in Doha, Qatar. (Photo by Stuart Franklin/Getty Images)

DOHA, Qatar - The first World Cup in the Middle East finally began Sunday night with a flashy opening ceremony and a match between Qatar and Ecuador without any beer for sale in the stadium.

The beer ban imposed two days before the start of the tournament was the latest controversial snag for a global event already under scrutiny for Qatar's human rights record and the emirates' push to ready the nation for the most compact World Cup in history.

And as Qatar was dropping its opening match 2-0 to Ecuador, the fan zone in central Doha became a chaotic scene as tens of thousands of fans were pushed against police lines to enter the venue. Fans were trying access the enclosed area that contained big screens for viewing matches and buy beer.

RELATED: World Cup 2022: US opens tourney against Wales in first appearance in 8 years

Qatar is home to 3 million people, most of them migrant workers, and has spent more than $200 billion for improvements across the energy-rich country that's roughly the same size as the state of Connecticut or the island of Jamaica. Among the additions are seven new purpose-built venues, including the 60,000-seat Al Bayt Stadium that hosted Sunday's opening ceremony and first match.

Qatar became the first host country to lose its opening game in 92 years of World Cup history. Qatar is on the global stage for the first time because it is the host nation, but it couldn’t stop Ecuador captain Enner Valencia, who scored both goals in the first half.

Bukayo Saka and Marcus Rashford put the last year’s European Championship loss behind them in England's 6-2 rout of Iran at the World Cup. Both players missed penalties in the shootout loss to Italy in the Euro 2020 final and were then subjected to racist abuse. But Saka scored twice at Khalifa International Stadium and Rashford came off the bench to add another with his first move of the match.

Cody Gakpo and substitute Davy Klaasen scored late to give the Netherlands a 2-0 victory over Senegal at the World Cup. Gakpo rose to glance in a cross by Frenkie de Jong in the 84th minute with the Dutch team's first effort on target in the Group A game. Klaasen added a second right at the end of eight minutes of stoppage time. The orange-shirted Dutch fans had been subdued until the late strikes. But Senegal predictably missed injured forward Sadio Mane to provide the finishing touch.

Gareth Bale converted a penalty kick in the 82nd minute to offset Tim Weah’s first-half goal and give Wales a 1-1 draw in the return to the World Cup for both nations.

Weah is the son of former FIFA Player of the Year and current Liberian President George Weah. He scored after a pass from Christian Pulisic in the 36th minute.

The United States was back in the World Cup after missing the 2018 tournament and appeared headed to victory. But Walker Zimmerman plowed down Bale from behind with the Welsh star’s back to the goal and Bale converted the penalty for his 41st international goal.

Here's the reaction to Tim Weah's goal for the U.S., as seen at Texas Live! in Arlington, the Minnesota United watch party at Allianz Field, the American Outlaws Atlanta watch party, Toyota Stadium in Frisco, and Smithfield Hall NYC.

FIFA’s threat of on-field punishment for players has pushed World Cup teams to back down. They abandoned a plan Monday for their captains to wear armbands that were seen as a rebuke to host nation Qatar’s human rights record.

Just hours before the first players wearing the armbands in support of the "One Love" campaign were set to take the field, FIFA warned they would immediately be shown yellow cards. That changed the calculus for the seven European teams. They may have expected to merely be fined.

The standoff was just the latest dispute that threatened to overshadow play on the field. Since being awarded the World Cup hosting rights in 2010, conservative Muslim Qatar has faced criticism of its treatment of low-paid migrant workers as well as its criminalization of homosexuality.