After non-stop soccer for the past two weeks, the World Cup is taking a small break.

There will be two days of rest before the quarterfinals start in Qatar with at least one surprising team still in contention to win soccer's biggest prize.

Morocco produced the latest upset in a tournament that has had its share of them, beating Spain in the round of 16 on Tuesday to become the first Arab nation to reach the World Cup quarterfinals. The Moroccans, who also became only the fourth African team to reach this stage, beat the 2010 champions in a penalty shootout. 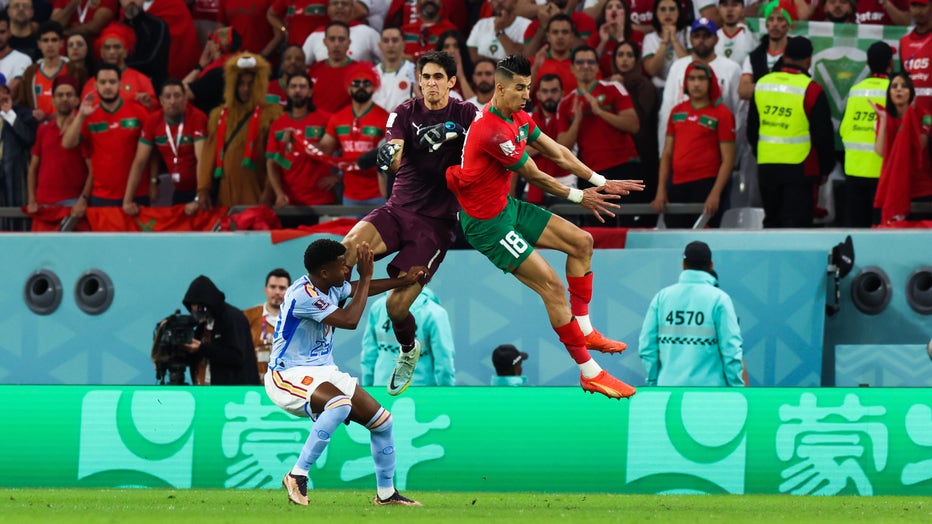 Jawad El Yamiq #18 of Morocco in action during the FIFA World Cup Qatar 2022 Round of 16 match between Morocco and Spain at Education City Stadium on December 6, 2022 in Al Rayyan, Qatar. (Photo by Liu Lu/VCG via Getty Images)

In the group stage, Saudi Arabia caused one of the biggest upsets in tournament history by beating Argentina in its opening match. Japan beat both Germany and Spain. The Germans and 2018 semifinalist Belgium both were eliminated before the knockout rounds.

Argentina, with Lionel Messi still looking to win a World Cup title, still made it through and then beat Australia to get into the last eight. Brazil, which had Neymar back in the lineup after an ankle injury, is there as well.

LINK: Get updates and more on the 2022 World Cup at foxsports.com.

And so is defending champion France, with Kylian Mbappe seemingly unstoppable, England, Croatia, the Netherlands and, of course, Portugal — with or without Cristiano Ronaldo in the starting lineup. 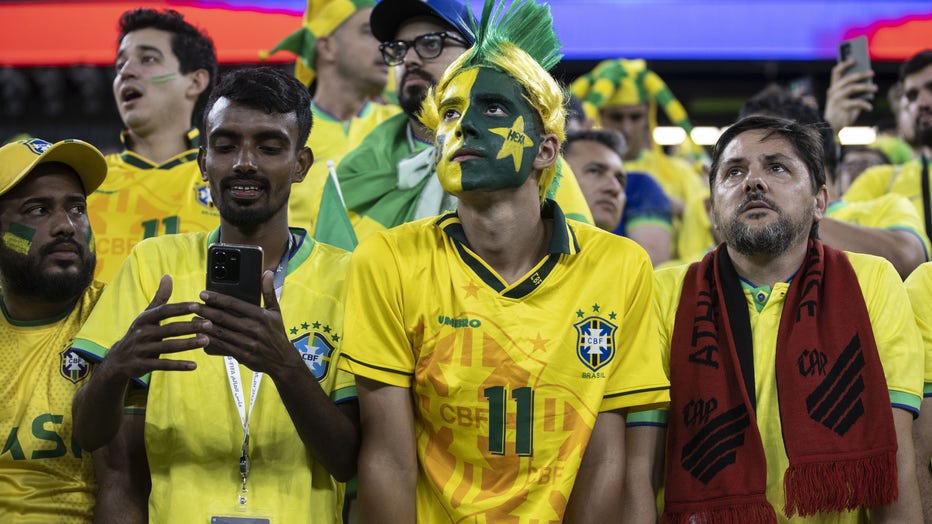 Fans show their support during the FIFA World Cup Qatar 2022 Round of 16 match between Brazil and South Korea at Stadium 974 on December 05, 2022 in Doha, Qatar. (Photo by Ercin Erturk/Anadolu Agency via Getty Images)

Five-time champion Brazil looks ready to go deep at this year's World Cup, with Neymar recovered from an ankle injury and the country’s greatest player, Pele, an inspiration as he watches from his hospital bed.

The 82-year-old soccer great is receiving treatment in Sao Paulo as he recovers from a respiratory infection that was aggravated by COVID-19, but his presence can be felt among Brazil’s players and fans, with banners, flags and T-shirts bearing his image.

On the field, Neymar and Co. are serious contenders, beating South Korea 4-1 in the round of 16.

Croatia is an aging team but has the knowhow at the World Cup after reaching the semifinals four years ago. 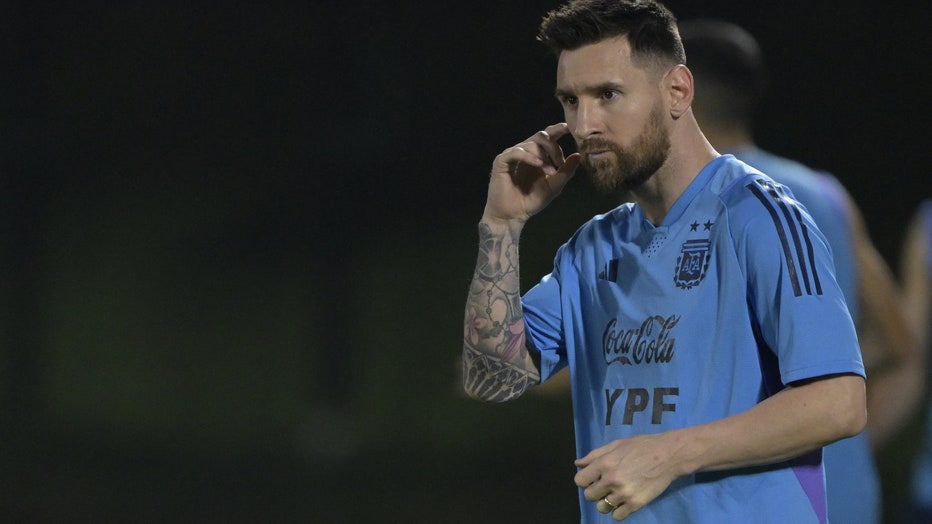 Argentina's forward #10 Lionel Messi gestures during a training session at Qatar University in Doha, on December 6, 2022 during the Qatar 2022 World Cup football tournament. (Photo by JUAN MABROMATA/AFP via Getty Images)

Argentina has recovered from one of the biggest upsets in World Cup history and now faces the Netherlands for a place in the semifinals.

For Argentina to win its third World Cup, expect Messi to provide the magic.

The problem is, however, Messi is no longer at his peak — even if his country remains as reliant on him as ever and he has managed to score three goals so far in Qatar.

Argentina’s fans have also played a part in inspiring the team.

"This is a unique moral boost. I’d like (it if) everybody could experience what a player feels when he sees all these people and thinks his country is behind him," Argentina coach Lionel Scaloni said. "They make you want to go out and celebrate."

The Netherlands has been quietly effective in reaching the quarterfinals, winning Group A and then beating the United States 3-1 in the round of 16.

These teams have plenty of history in the World Cup, with Argentina beating the Netherlands in the final in 1978 and in the semifinals in 2014. 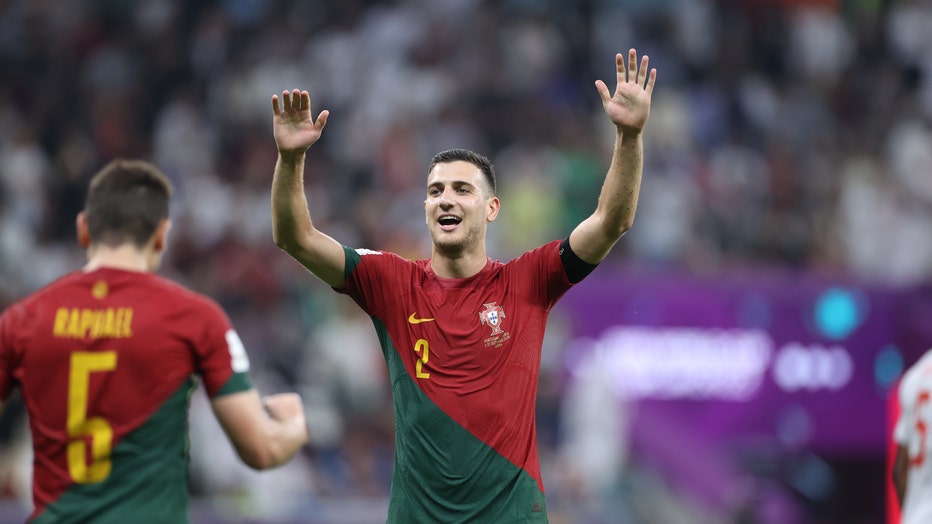 Diogo Dalot (2) of Portugal in action during the FIFA World Cup Qatar 2022 Round of 16 match between Portugal and Switzerland at Lusail Stadium on December 06, 2022 in Lusail City, Qatar. (Photo by Fareed Kotb/Anadolu Agency via Getty Images)

Portugal has shown what it can do without Ronaldo after the five-time Ballon d’Or winner was benched in the 6-1 rout of Switzerland in the round of 16.

It's not clear if Ronaldo will be recalled for the quarterfinal match against Morocco or if he will be asked to accept a reduced role.

"I will use what I believe is the right strategy, as I have done my entire life," Portugal coach Fernando Santos said.

That doesn’t bode well for Ronaldo, given the fluidity the team showed against Switzerland without him on the field.

Standing in Portugal’s way is the surprise team of the World Cup, Morocco.

"No one is giving up. Everyone’s playing with bandages, everyone is trying to raise their level of play and mentality," Regragui said. "We succeeded in creating a family, and we feel there’s a whole country behind us." 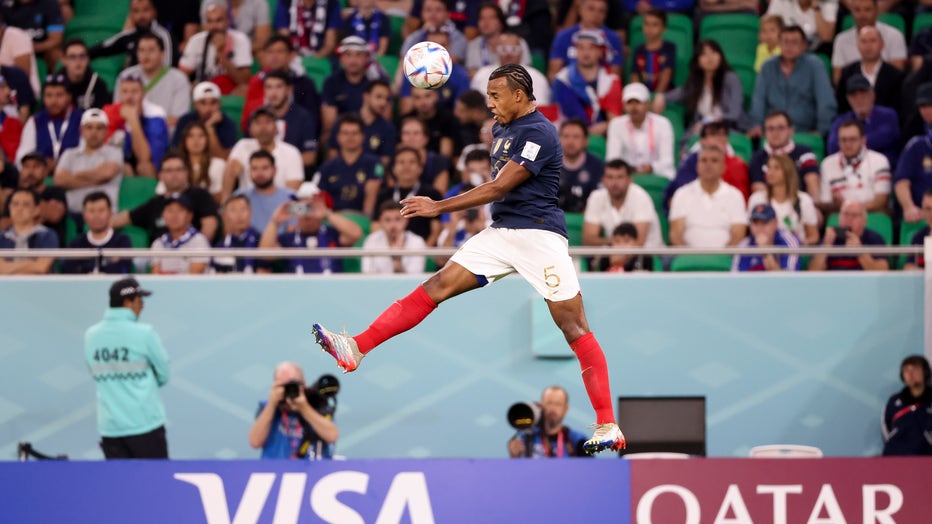 Jules Kounde of France during the FIFA World Cup Qatar 2022 Round of 16 match between France and Poland at Al Thumama Stadium on December 4, 2022 in Doha, Qatar. (Photo by Jean Catuffe/Getty Images)

Two of the best strikers in the world go head-to-head in the last of the four quarterfinal matches.

Harry Kane, the leading scorer at the last World Cup, finally got off the mark in England’s 3-0 win over Senegal. But he has some catching to do if he wants to get close to Mbappe, who has scored five goals in the tournament.

"I think we still have not seen the best of Kylian," France forward Olivier Giroud said of his teammate. "I hope (his best) is going to come soon and he will beat all the records. He is amazing and he is still young, which is scary because he still can improve his game."

England has been getting its goals from a variety of places. Eight different England players have scored for the team in Qatar so far.

"They," England goalkeeper Jordan Pickford said, "have got to be worried about us as well, our threat in attack."