US eliminated from World Cup

The Netherlands beat the Americans 3-1 to advance to the quarterfinals.

DOHA, Qatar - The U.S. men's national team has been eliminated from the World Cup after losing to the Netherlands 3-1 in the round of 16.

Memphis Depay and Daley Blind scored in the first half and Denzil Dumfries added a late goal for the Dutch that advanced them to the quarterfinals.

Second-half subsitute Haji Wright cut the U.S. deficit to 2-1 in the 76th minute when Christian Pulisic’s cross hit his trailing foot and popped over goalkeeper Andries Noppert and into the net. But Dumfries, who assisted on the first two goals, scored on a volley in the 81st.

"When you play a team with so much quality like that and you give them three, four chances, they’re going to put three or four away," United States captain Tyler Adams said. "We can show that we can hang with some of the best teams in the world, some of the best players in world, and that’s a lot of progress for U.S. soccer. We’re moving in the right direction, for sure, but we need to keep pushing, because we’re not there yet. But we’re close."

LINK: Get updates and more on the World Cup at foxsports.com.

Runners-up in 1974, 1978 and 2010, the Oranje extended their unbeaten streak to 19 games and face Argentina or Australia on Friday.

It was a disappointing end for a rebuilt U.S. team hoping to advance past the round of 16 for the first time since 2002. Using the second-youngest squad in the tournament, the Americans achieved the bare minimum to consider the World Cup a success, beating Iran in their group-stage finale to reach the knockout round.

But just like in 2010 against Ghana and 2014 against Belgium, the United States was eliminated in the round of 16. The Americans are winless in 12 games against European opponents at the World Cup since 2002, losing six, and are 1-7 during the tournament’s knockout rounds.

Pulisic, playing four days after getting hurt during his game-winning goal against Iran, had a chance to put the United States ahead in the third minute but Noppert, playing in only his fourth international match, blocked his point-blank shot. With the Americans seeking an equalizing goal, Noppert dived to stop Tim Weah’s 25-yard effort in the 42nd. 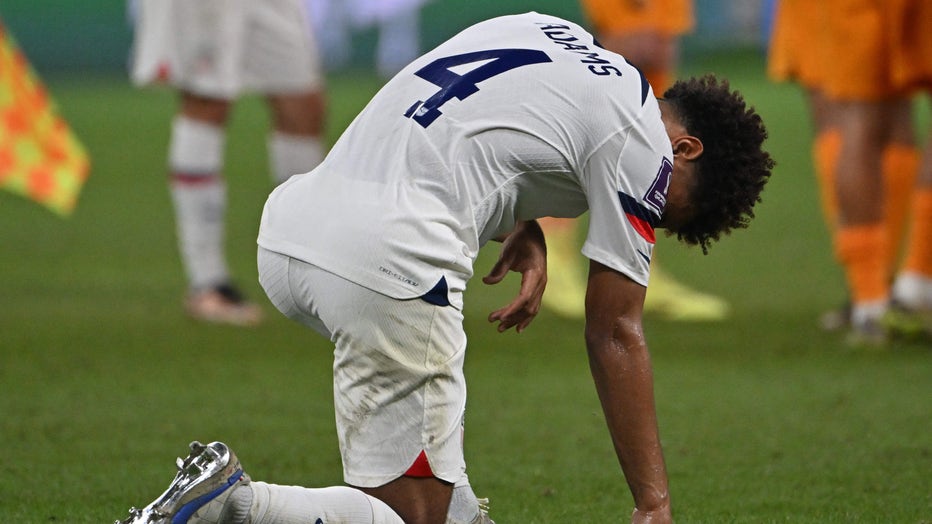 USA's midfielder #04 Tyler Adams reacts after his team lost the Qatar 2022 World Cup round of 16 football match between the Netherlands and USA at Khalifa International Stadium in Doha on December 3, 2022. (Photo by ALBERTO PIZZOLI/AFP via Getty Imag

The crowd of 44,846 was well back from the field at renovated Khalifa International Stadium, which has an athletics track and was more subdued than the raucous spectators for the match against Iran.

While the United States had the better play at the start, the Dutch went ahead after breaking the American press. Dumfries one-timed a pass from the right flank as Depay streaked unmarked into the penalty area. His right-footed shot from 14 yards beat Matt Turner to the far post in the 10th minute for his 43rd international goal, moving him into sole possession of second place on the Dutch career scoring list behind Robin van Persie’s 50. 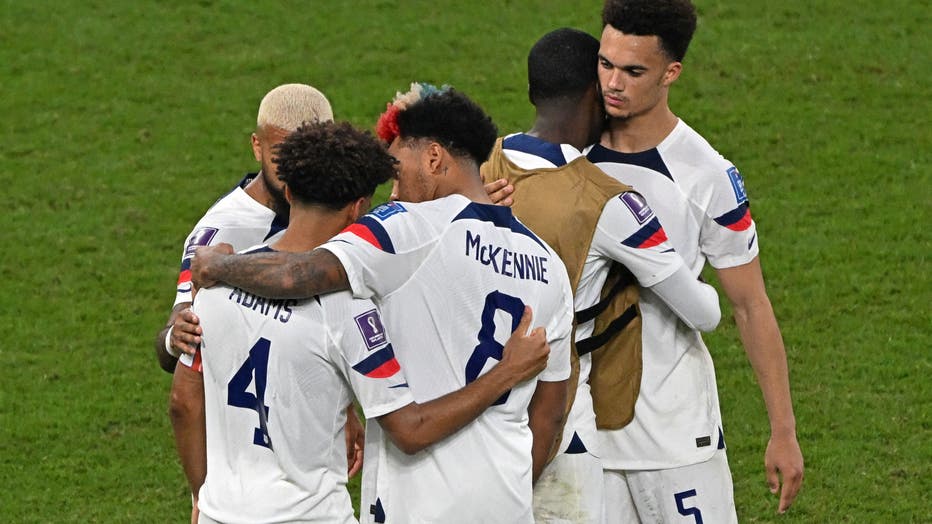 Players of USA comfort each other after losing 3-1 to Netherlands in the Qatar 2022 World Cup round of 16 football match between the Netherlands and USA at Khalifa International Stadium in Doha on December 3, 2022. (Photo by Raul ARBOLEDA / AFP) (Pho

The goal was the first allowed by the United States from the run of play in the tournament. In 37 World Cup matches, the Americans have never won a game in which they trailed.

The Netherlands doubled the lead on virtually the final kick of the first half, in the first minute of stoppage time. After a quick series of exchanges following a throw-in, Dumfries got a cross around Tyler Adams and found Blind wide open at the penalty spot. Blind scored only his third international goal — his first in eight years. Gio Reyna fed an open Weston McKennie in the 54th, but he skied his shot over the crossbar.

As fans watched the USA take on the Netherlands in the World Cup, FOX News' Alex Hogan spoke live from Qatar with LiveNOW from FOX's Josh Breslow.

Wright entered in the 67th and scored his second international goal, sparking U.S. hopes. But Dumfries was left unmarked by Tim Ream and Antonee Robinson and used his left foot to volley Blind’s cross.

"Just looking around that locker room, the silence is deafening," Turner said. "We all want to create moments for people back at home to fall in love with the game and tonight was not one of those nights, unfortunately."

The Netherlands will next play Friday at Lusail Stadium, the site of this year’s final.

The Americans begin the 2026 cycle with a match against Serbia on Jan. 25 in Los Angeles and face Colombia three days later in Carson, California. The games are not on FIFA dates, meaning mostly Major League Soccer players will be used. 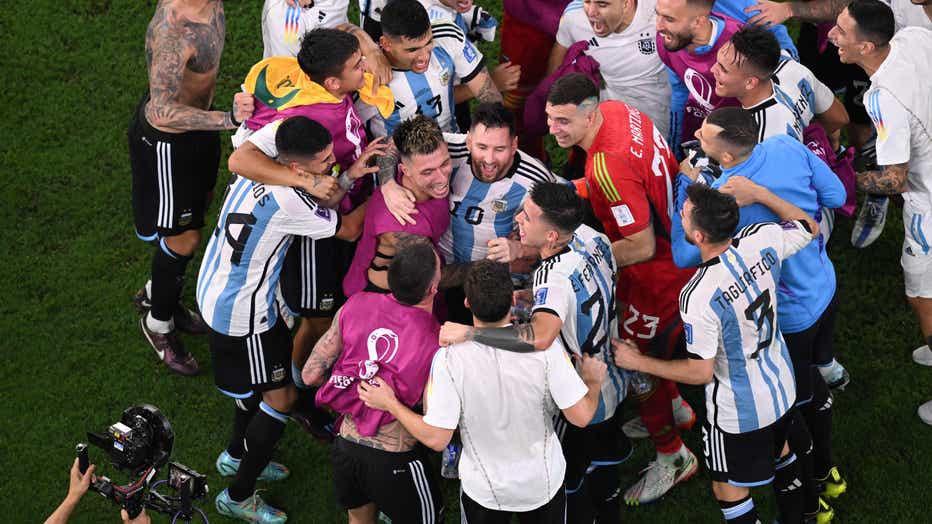 Argentina's players celebrate the team's victory at the end of the Qatar 2022 World Cup round of 16 football match between Argentina and Australia at the Ahmad Bin Ali Stadium in Al-Rayyan, west of Doha on December 3, 2022. (Photo by Kirill KUDRYAVTS

Lionel Messi was pushed into the middle of a joyous post-match huddle as Argentina’s players jumped up and down to celebrate reaching the World Cup quarterfinals.

Messi delivered again for his country, marking the 1,000th game of his era-defining career with his first goal in the knockout stage of a World Cup to lead Argentina to a 2-1 win over Australia on Saturday.

This was not the walkover most were expecting, though.

At the final whistle, Argentina was just as grateful for the goalkeeper as the No. 10 with magic in his boots.

Emi Martinez came up with a sprawling save in the last seconds of an increasingly anxious match for Argentina to prevent the need for extra time and the potential of another shock in a World Cup that has been full of them.

"We gave it everything," Australia striker Jackson Irvine said through tears, "but it wasn’t enough."

With a flourish of his famous left foot in the 34th minute, Messi put Argentina ahead with his third goal at this year's tournament and ninth in total at the World Cup — one more than Diego Maradona.

Julián Álvarez pounced on a heavy touch by Australia goalkeeper Mathew Ryan to tap into an empty net for the second goal as Argentina set up a meeting with the Netherlands in the quarterfinals.

Australia scored a 77th-minute consolation goal when Craig Goodwin’s shot deflected into the net off Argentina midfielder Enzo Fernandez. Amid late pressure from the Australians, there was a chance for Garang Kuol to send the game to extra time but his shot was smothered by Martinez.

For Australia’s squad of unheralded players, it proved to be a match too far at a tournament in which the team has exceeded expectations by reaching the knockout stage for only the second time. Australia also lost in the last 16 in 2006, to eventual champion Italy.

Maybe it’s an omen for Argentina, which has fully recovered from its shocking loss to Saudi Arabia in its opening group match and won three straight games.

As for Messi, he now has 789 goals in a career that might yet reach a crescendo on Dec. 18 by winning the soccer’s biggest trophy in his fifth and likely last World Cup. 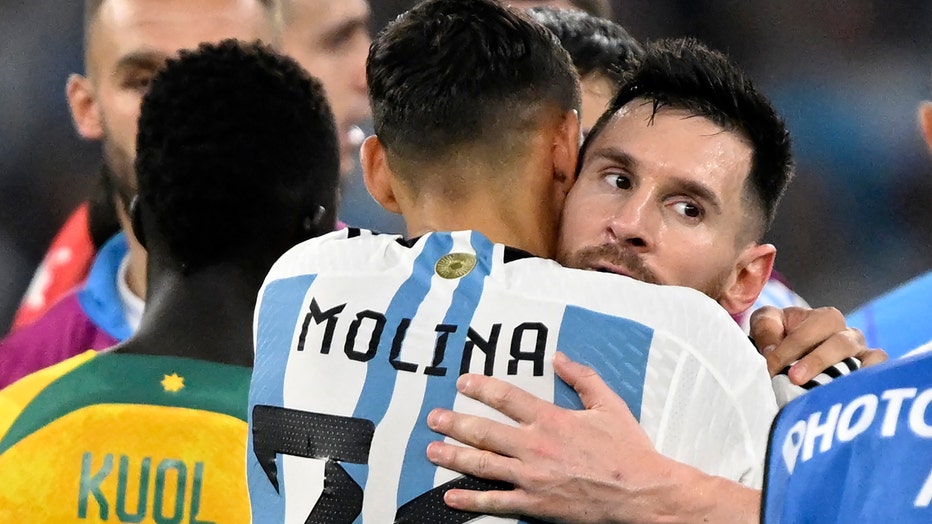 Argentina's forward #10 Lionel Messi (R) celebrates with Argentina's defender #26 Nahuel Molina after they won the Qatar 2022 World Cup round of 16 football match between Argentina and Australia at the Ahmad Bin Ali Stadium in Al-Rayyan, west of Doha

The dream is still alive for the seven-time world player of the year and the tens of thousands of Argentina fans who dominated the Ahmad Bin Ali Stadium, massively outnumbering the small pockets of green-and-gold-clad Australia supporters and making it feel like a match in Buenos Aires or Rosario.

After Messi’s goal, the Argentina fans bounced, swayed and twirled their scarves in joyous celebration of their favorite player’s latest piece of ingenuity.

He had been quiet until that point, crowded out by a compact and defensively solid Australia team. He’s never quiet for long, though.

Messi sent a pass inside to the edge of the area and kept running, eventually receiving a lay-off from Nicolas Otamendi to take one touch and stroke his finish through the long legs of Australia defender Harry Souttar — the tallest outfield player at the World Cup.

And when Alvarez added the second, it looked like Argentina was going to cruise to victory. Messi started putting on a show and one 40-meter (yard) dribble wowed the crowd as he slalomed past three defenders and was tackled just as he was about to shoot.

This was no walkover, though, with Australia mounting a stirring fightback in the final 20 minutes, even putting Souttar up front in stoppage time for his aerial threat.

A late bombardment of high balls nearly paid off, with two Argentina players falling on top of Martinez after his dramatic late save.

Argentina turned a corner with wins over Mexico and Poland and emerged as the winner of Group C to face Australia, ranked 38th in the world. Australia is in the knockout round for only the second time, its previous trip a 1-0 loss to Italy in 2006.

Argentina won't take Australia for granted, even though it has five wins, one draw and one loss in eight meetings dating to 1988. This is the first match between the two teams since 2007.

"We know, at the moment, everything is very difficult," Messi said. "All the opponents are complicated. We know it as well as anyone."