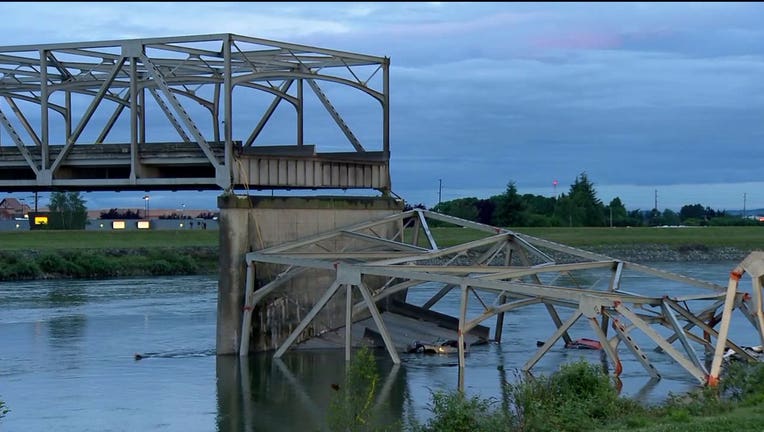 SEATTLE -- In a press conference Friday afternoon, Gov. Jay Inslee announced that there has been no delay in beginning to look for solutions in how to quickly restore the collapsed Interstate 5 bridge.

A portion of an Interstate 5 bridge over the Skagit River, about 60 miles north of Seattle, collapsed about 7 p.m. Thursday, sending three vehicles and people plunging into the cold water at least 50 feet below. There were no fatalities.

“Last night, Washington got what it really needed, which is a group of great rescuers and a good measure of luck. And both combined...we had no fatalities last night in the loss of the I-5 bridge over the Skagit River,” Inslee said.

"We are working in a coordinated fashion with state, federal and local government to restore the bridge," Inslee said.

The governor said he has already spoken to Secretary of Transportation Ray LaHood about the need for federal support. Sen. Patty Murray also joined the governor and told him that federal funds had been green-lighted and that a check for $1 million "was in the mail."

Projected costs to repair the bridge are $15 million.

Inslee said the federal government is assisting the state in finding a temporary structure. Efforts are underway to find a Bailey Bridge, a type of portable bridge that was developed during World War II; the Bailey Bridge would be used to span the broken section of the bridge that collapse.

He also cautioned that there will be "substantial delays" along the I-5 corridor that could potentially last for months.

Washington State Secretary of Transportation Lynn Peterson said that if it is necessary the bridge will be closed. "There is no intent at this point to rebuild the entire bridge," she added and reiterated that based on WSDOT inspections, "the bridge is not structurally deficient."

WSDOT has begun to analyze the remaining part of the bridge to determine its stability and if it could support a temporary structure.

Inslee was joined by senators Murray, Maria Cantwell and Suzan DelBene, who each expressed gratitude to first-responders.

Calling for patience, the governor also quipped, "we want to discourage drivers from crashing their trucks into state bridges."

National Transportation Safety Board Chairman Deborah Hersman said the 1,111 foot-long through-truss steel bridge was constructed in 1955, and while it was worn and "showed its age," it was still functional.

The safety chairman said it could take up to a year for an investigation to be completed. The initial investigation will take 7-10 days, and a number of investigators will stay on site after that. The primary goal of the NTSB's report is to understand the failure of the bridge, Hersman said, and to help to ensure that a similar collapse would not happen again.

"We want to make sure we don't see events where interstate bridges drop into the water below them," Hersman said.

The cause of the collapse has been attributed to an over-sized semi clipping a portion of one of the bridge's upper tresses.

The bridge typically carries about 71,000 vehicles a day and is a major commercial route between the U.S. and Canada. About 11 percent of the vehicles traveling the route are commercial trucks transporting goods between the two countries, the U.S. Department of Transportation said.