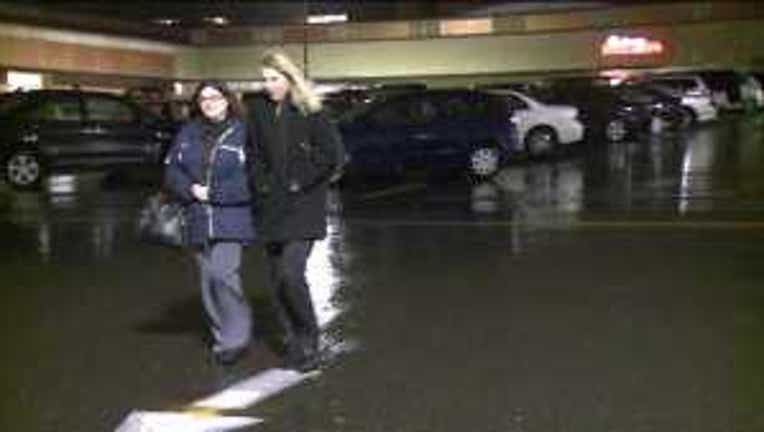 SEATTLE -- Two women shopping at the Northgate Mall in Seattle learned that when it comes to the holiday season, it's important to keep an eye out for anything suspicious.

Heather Jameson and Tracy Muter were in the mall's parking lot late Tuesday night following an evening of shopping. As they approached their car, one of the woman noticed someone lurking behind them.

"I caught out of the corner of my eye a young guy walking behind us," Jameson said. "I was, like, there are no cars around, where is he going?"

The suspect ran behind Jameson and grabbed her purse.

"Next thing I know he hooked my purse and we're doing a tug of war," she said.

The two battled on the ground for a moment before Muter came to the aid of her friend.

"Then I just lunged at him, fist, keys, whatever I had and was not going to let him get away with her purse," Muter said.

Fortunately, no one was hurt during the attack, and the thief got away empty-handed.

But their ordeal highlights the fact that sometimes you can do everything right and still be a victim, said Myrle Carner, Executive Director of Crime Stoppers of Puget Sound.

Carner said the holiday season presents a bevy of "opportunity crimes" for crooks. He said to avoid theft, shoppers should park close to the store, be aware of their surroundings and carry your purse across your body. Carner said if anything happens, go back into the store or your car as fast as you can. And be sure to put packages and shopping bags in the trunk of your car as fast as you can.

The suspect in the Northgate attack jumped into a white 1980s or 1990s Volkswagen Jetta, the victims said. The license plate and window were covered. No description of the suspect was immediately available.