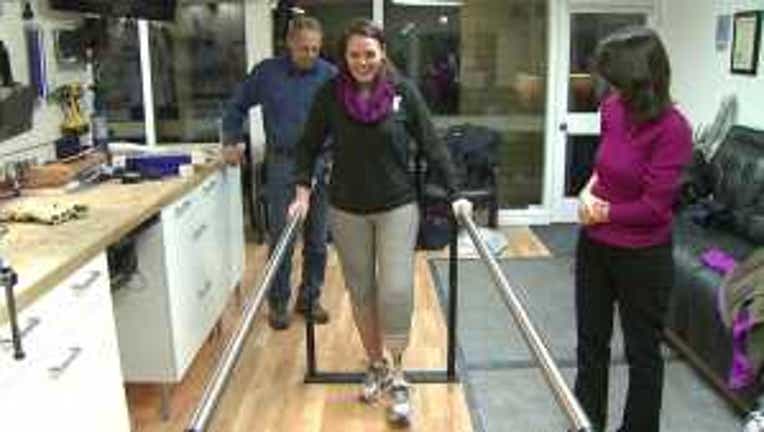 SEATTLE -- Nearly three months ago, Andrea Haisch lost her left leg below the knee when a giant boulder from a rock slide landed on her during a family rock-climbing trip near Leavenworth.

On Wednesday, she walked for the first time on a new, prosthetic leg.

If happiness were measured in smiles, Andrea Haisch would be cashing in. Because a day she's been waiting months for finally arrived Wednesday.

"This is called a gel liner, it protects my skin," Andrea explained as she pointed to a part of her prosthetic leg.

In late august, Andrea got pinned under a 3,000 pound boulder during a rock-climbing trip with her family.

"A big rock was coming down, and so I tried to run," she said of that day.

When he (her brother) said the words ‘falling!’ and I looked up and literally saw my daughter just getting taken away in a rock slide, just taking her away,” said Andrea’s mother, Karlene Haisch.

Andrea lost her left leg, below the knee.

A team at Davidson Prosthetics had been working on Andrea’s prosthetic for weeks.

Finally, with her mom and dad by her side, it was time for Andrea to take those first steps.

"Just walk,” Andrea said out loud as she began to take her first step on her new leg. “Wow."

She was a little wobbly at first. But after several tries, and a few adjustments, Andrea got more confidence.

"Taking the first step, probably indescribable,” she said afterward. “I don't think anyone can relate to it except for people who are amputees."

For Andrea, this is more than a first step, it's a leap into a future she wasn't sure she'd have.

"It's foreign, it's strange, but it's so rewarding to know I can take one step, and I can take 5 million steps now, and I can do anything," Andrea said, beaming.