WASHINGTON, D.C. -- A woman claimed she won $20,000 in the lottery but was denied her prize. However, the Virginia Lottery now says she may face charges.

Virginia Lottery officials told her there had been a mistake and the ticket was issued in error.

“I want the money that I thought I won. If you look at the ticket, it says I won this money. It wasn’t anything that I did wrong. It’s what they did wrong,” she said.

Newman filed a complaint with the Virginia Lottery. On Wednesday, lottery officials released the findings of their investigation and concluded that there were actually two different issues with both that ticket and a previous ticket Newman had tried to cash.

The case in question involved a game that Ms. Newman believed entitled her to a $20,000 prize. The investigation has concluded that Ms. Newman was actually trying to cash two separate tickets, the lower portion of one ticket and the top portion of another ticket. Based on the ticket codes we obtained from our ticket vendor, we have determined that the top ticket was not a winner, but the small piece of the bottom ticket would have been a $4.00 winning ticket if Ms. Newman had the entire ticket. 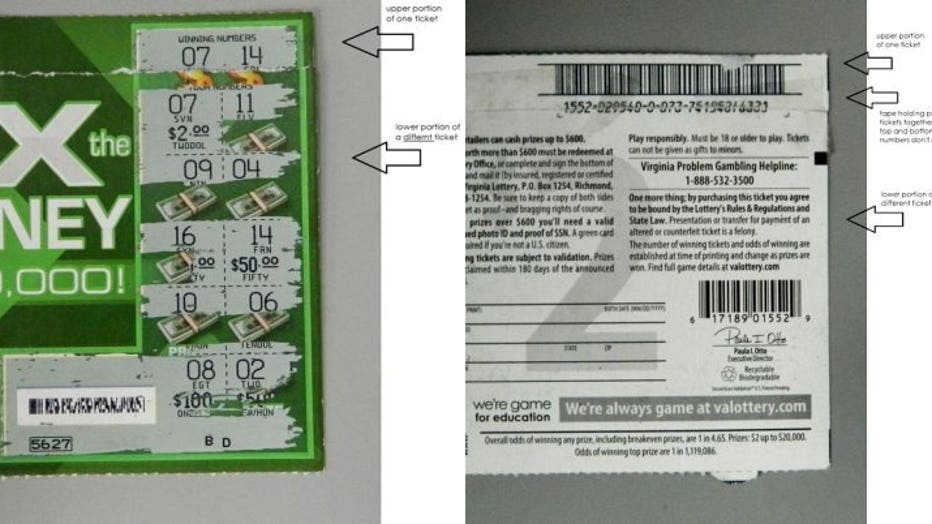 The lottery said this second winning ticket had been taped together

There was second case involving Newman was not reported in the media, the lottery said, and once again involved two tickets. This time Newman had claimed them to be worth a prize of $52.

It was clear to our customer service representative and our investigators that this too was an altered ticket where someone attempted to tape together two parts of separate tickets to claim a prize. Ms. Newman admitted to our Lottery investigator that she taped the two tickets together.

Officials added that they are reviewing her case to see if any other actions are necessary.

This is a clear violation of Lottery rules and in this case, the law:

§ 58.1-4017. Alteration and forgery; presentation of counterfeit or altered ticket or share; penalty.