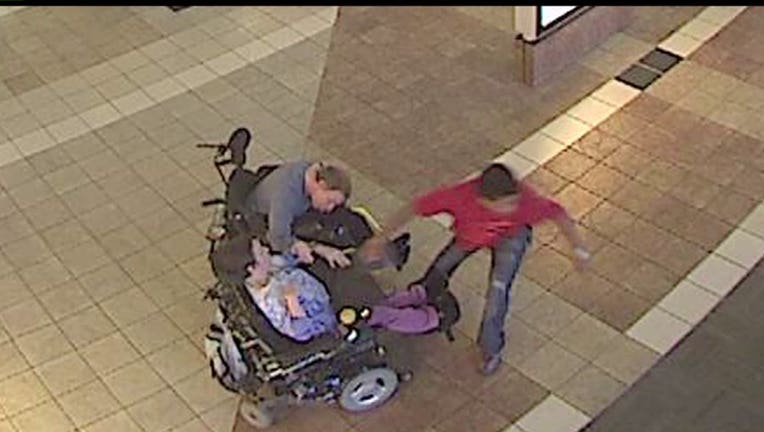 One of the thieves steals the tablet computer off the disabled woman's wheelchair tray and then takes off at Northgate Mall.

SEATTLE -- A woman living with cerebral palsy who has been wheelchair-bound since she could walk says the two men who robbed her in Northgate Mall have bigger problems than she does.

Carolyn and her husband. who is also in wheelchair. were huddled together talking and waiting for an Access bus home to their assisted living facility at about 7 p.m. on  Aug. 22 outside Payless Shoes in the mall when two suspects started stalking them.

“I didn't want to engage them because they were kind of scary-looking,” she said.

Seconds later, one man wearing a red T-shirt ran up and grabbed her Samsung Nook tablet off her wheelchair tray and ran.

"I was mostly angry because they scared me and made me feel unsafe,” said Carolyn.

Carolyn says she forgives the two men for their crime but adds, “I'm not gonna lie down and take it. I'm gonna fight back the best I can."

She had all of the work she does, reviewing Christian novels, backed up -- and her husband bought her a new tablet.

Still, she is hoping someone recognizes the suspects and calls Crime Stoppers at 1-800-222-TIPS with their names.  All calls are anonymous and there is a cash reward  of up to $1,000 for the information.