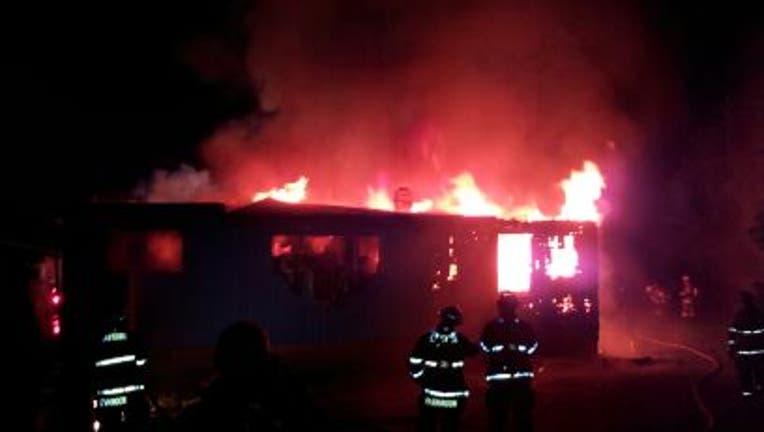 NORTH BEND -- There isn’t much left of the Perazzo family home after it was badly burned Friday night. While the family lost valuable memories and pictures that can’t be replaced, thanks to a volunteer fireman and a young woman, everyone made it out safe.

“The house was totally in flames. Totally in smoke,” homeowner John Perazzo said.

Perazzo, 79,  lived in the home with his wife and brother, Ronnie, for 54 years. On Friday night, John said he smelled smoke and checked on his brother who is confined to a wheelchair.

“I went into the front room. His bed was on fire in several spots. There was fire leaking up the side.”

Around the same time, John’s granddaughter, Latasha Storkel, heard the commotion from outside.

“All the sudden I heard a bang, so I thought I should come inside and my grandparents’ house door was open, which it’s never open, and there was smoke coming out of it,” Storkel said. She then found her great uncle in his bed.

“It was getting worse and worse and it was hard to breathe and I told him, 'I’m going to be a little rough with you to get you out and he was like, OK',” she said. “So I put my hands under him and dragged him and bent over and pulled him to the front door. Then I heard a car and a guy was running and his radio was going off.” That man was volunteer fire fighter Kevin Nolet.

“The gal kept saying to me, 'He can’t walk, he can’t walk',” Nolet said. "So, I came up behind him, scooped him up in a bear hug and backed out the door.”

The Perazzo family was glad Nolet got there when he did.

“He was right on the scene and trying to do what he could until all the department got there,” Perazzo said. But the real hero might be Storkel.

“She deserves a medal,” he said.

“I don’t really like being called a hero,” she said. “I just dragged him from one area to the other, really. Just trying to do the right thing. I didn’t want anyone to get hurt.”

Ronnie Perazzo was taken to the hospital to be treated for burns. Doctors said he should recover.