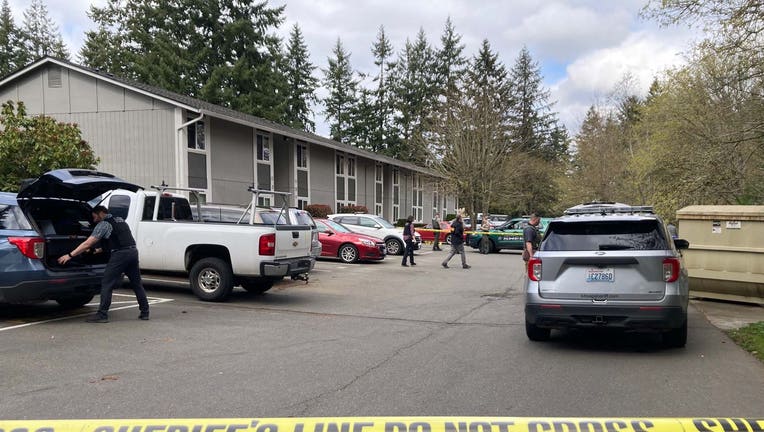 According to authorities, officers and deputies were called to reports of a shooting at the Alta Pointe Apartments in Port Orchard Tuesday afternoon. A caller told dispatch they saw a woman "with blood on her" get into a black Mustang and speed off.

Officers spotted the Mustang and pulled it over. There was a person driving the car and an unconscious woman in the passenger seat.

The driver was arrested and the car impounded, while medical responders took the woman to the hospital.

Kitsap County is holding the Mustang for a search warrant, and after questioning the suspect, booked them into jail on unrelated charges of unlawful possession of a firearm, possession of a stolen firearm and an outstanding DUI warrant.

Detectives at the apartments were unable to get much information from neighbors, who police say refused to cooperate. They served a search warrant on the suspect’s apartment and found guns and incendiary devices.

The victim is reported to be in stable condition at the hospital, and detectives believe she and the suspect knew each other. Detectives have not spoken with her yet.

Anyone with information on the shooting is urged to contact Detective Tim Keeler at TKeeler@co.kitsap.wa.us.

Those who wish to remain anonymous can also submit a tip to CrimeStoppers at www.CrimeStoppers.org or by using the P3Tips app on their phone.