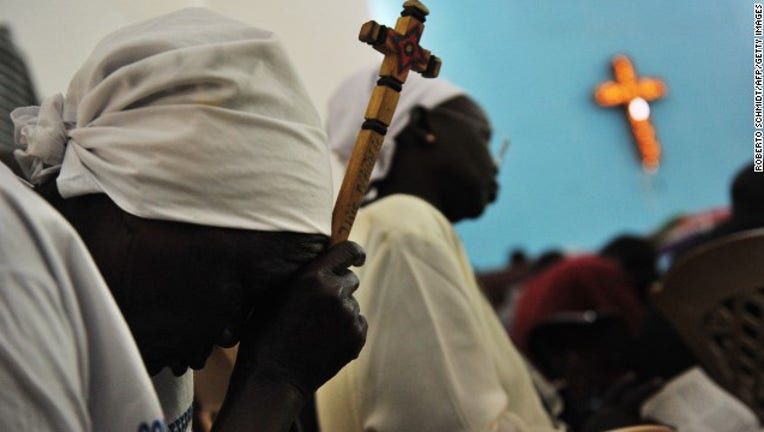 File photo: A Sudanese woman holds a cross as she prays.

SUDAN -- A Sudanese court has sentenced a Christian woman to death for renouncing Islam, her lawyer said Thursday.

Meriam Yehya Ibrahim, 27, was convicted by a Khartoum court this week of apostasy, or the renunciation of faith.

The court considers her to be Muslim.

She also was convicted of adultery.

Ibrahim's lawyer Haram Othman told CNN that her legal team will appeal the verdict within 15 days.

According to the rights group Amnesty International, she was convicted of adultery because her marriage to a Christian man was considered void under Sharia law. She was sentenced to 100 lashes for the second crime.

"The verdict is contrary to commitments Sudan has made in its own Constitution and commitments made under regional and international law; Meriam has been convicted solely on account of her religious convictions and personal status," said Katherine Perks with the African Centre for Justice and Peace Studies.

"The fact that a woman could be sentenced to death for her religious choice, and to flogging for being married to a man of an allegedly different religion, is abhorrent and should never be even considered," Manar Idriss, Amnesty International's Sudan researcher, said in a statement.

" 'Adultery' and 'apostasy' are acts which should not be considered crimes at all, let alone meet the international standard of 'most serious crimes' in relation to the death penalty. It is a flagrant breach of international human rights law," the researcher said.

Ibrahim is eight months pregnant and is in custody with her 20-month-old son, according to Amnesty International, which considers her a prisoner of conscience.

She was born to a Sudanese Muslim father and an Ethiopian Orthodox mother. Her father left when she was 6 years old, and Ibrahim was raised by her mother as a Christian.

However, because her father was Muslim, the courts considered her to be the same, which would mean her marriage to a non-Muslim man is void.

In past cases involving pregnant or nursing women, the Sudanese government waited until the mother weaned her child before executing any sentence, said Christian Solidarity Worldwide spokeswoman Kiri Kankhwende.

Attempts to contact the justice minister and foreign affairs minister in Sudan were unsuccessful.

Foreign embassies in Khartoum are urging the government there to reverse course.

"We call upon the Government of Sudan to respect the right to freedom of religion, including one's right to change one's faith or beliefs, a right which is enshrined in international human rights law as well as in Sudan's own 2005 Interim Constitution," the embassies of the United States, United Kingdom, Canada and Netherlands said in a statement.

"We further urge Sudanese legal authorities to approach Ms. Meriam's case with justice and compassion that is in keeping with the values of the Sudanese people," it read.