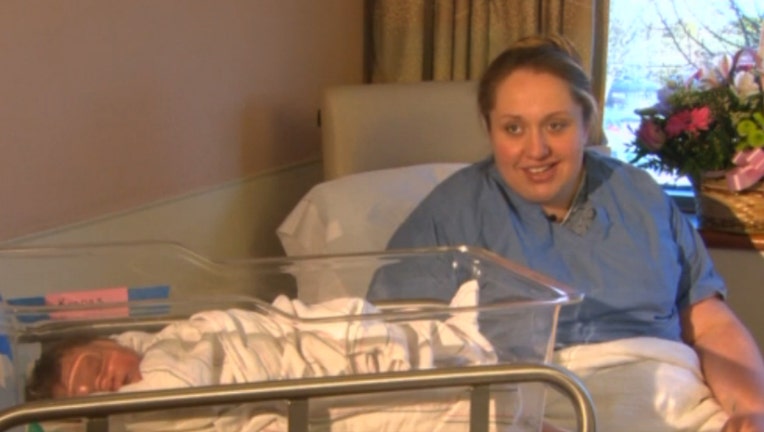 WEYMOUTH, Mass. -- A Massachusetts woman received the surprise of a lifetime when she went to the hospital with lower back pain and went home with a new baby.

"Tuesday morning, I woke up and I had, like, crazy lower back pain," Katie Kropas said.

She rushed to the hospital and heard news she was least expecting.

Baby Ellie was born a healthy 10 pounds, 2 ounces. Her “instant mom” was shocked because she said she didn’t experience the typical signs of pregnancy.

"I thought I had put on, like, some Christmas season weight, you know, but I never thought I was pregnant. Never," Kropas said.

The phenomena is called a “cryptic” pregnancy, and it’s the subject of a popular TV show called “I Didn’t Know I Was Pregnant.”

Dr. Kim Dever, of South Shore Hospital where Kropas delivered her baby, said they see about 3,500 births a year. Out of those, just a few are “cryptic.”

The head of obstetrics at the hospital, Dever said “cryptic” pregnancies happen especially if a woman is overweight or has irregular periods. The mom-to-be may not feel much movement because of where the placenta is positioned.

"Very often, especially in your first pregnancy, you sometimes really aren't aware of what you're feeling and we often times have women joke and think they're feeling gas pains or they can attribute it to other natural conditions," Dever said.