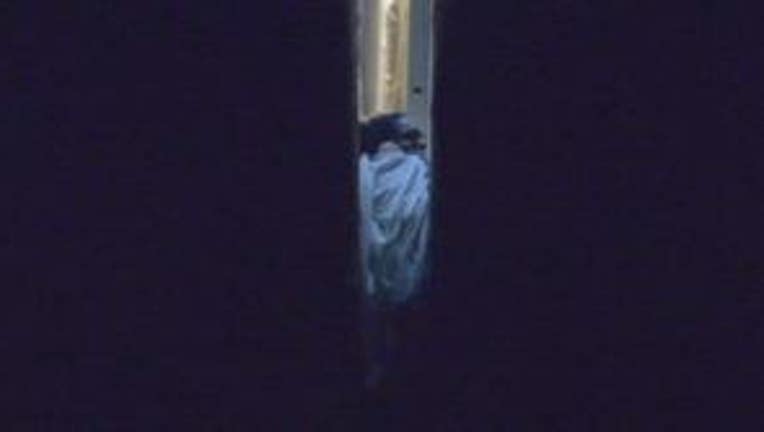 Woman stuck between two concrete walls. A four-hour ordeal had a happy ending when firefighters freed a woman who was stuck between walls. (Photo: KPTV/Portland)

PORTLAND -- A woman who somehow fell from an apartment and became wedged in an eight-inch space between two concrete walls for more than three hours Wednesday was rescued after firefighters used jackhammers to extricate her.

Portland firefighters said the woman became trapped between a 20-foot wall and another building near Southwest 12th and Columbia Street in Portland at 3:45 a.m. Wednesday.

She was trapped with her head up and her feet about 3 feet from the ground.

It took a crew of firefighters, an urban search and rescue team and enough heavy equipment to cut through concrete to save Anita Mann.

Oregon Health & Science University confirmed Mann remained a patient at the hospital at 4 p.m. Wednesday. Her family has not given permission for hospital workers to release updates on her condition.

Calls were made to 911 almost immediately after the woman fell and began screaming for help. Some callers thought it was a child, but they all reported someone needed help in a hurry.

Dispatcher: How far did she fall?

Caller: I don't know, honey, all I know is she's got a hand poked up, screaming for help. Nobody can get to her. There's two huge walls. I don't know how anybody could get stuck between the two of them, but seems like she is.

Dispatcher: Hold on one moment.

Caller: Please hurry, because if she falls, she's gonna die.

It was only around 36 degrees outside during the rescue operation, so a large heater was used to try and keep Mann warm.

The woman was alert and talking to crews as they worked to rescue her. At one point, firefighters had to reassess their plan because the concrete dust being created was causing breathing issues for the woman.

Crews used large jack hammers and concrete saws to create openings on each side of the woman. The window-sized holes created access points and allowed firefighters to more effectively get to Mann.

With the help of some soapy water being used as lubrication, firefighters slid the woman between the walls to safety.

"That last couple feet, she had that look of determination. I think we were all pretty convinced that no matter what, she was coming out that way," said Lt. Rich Chatman. "When she got to that last foot, she looked over and she said, 'I'm coming out.'"

She celebrated once firefighters were able to get her free.

"Just to see the look on her face when she got out made the effort worth it," Chatman said.

Investigators said the events leading up the woman's fall remain unclear at this point.

To read more and see more photos and video at KPTV, click here.