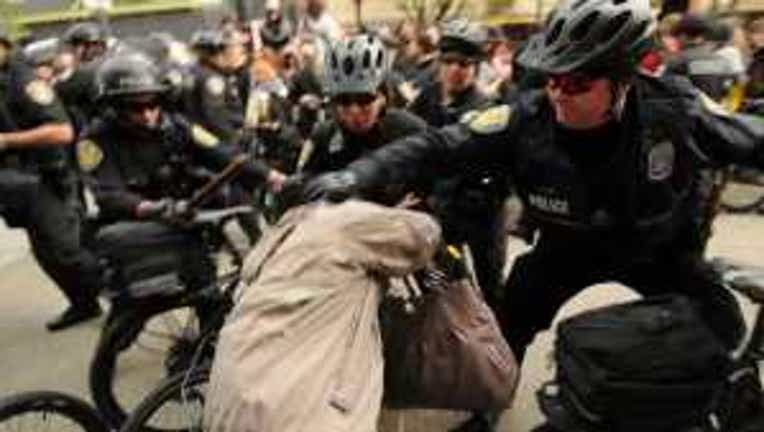 In this screen grab from a cell phone video, Seattle police can be seen yanking Maria Morales (in cream-colored coat) off of her bicycle and to the ground on May 1, 2012.

SEATTLE -- Seattle police had their hands full when violence erupted during the May Day protests. But Maria Morales says those officers never had a reason to put their hands on her or arrest her, and she is now suing the city and police department.

Seattle police officer Sonya Fry said in a probable cause statement that the action was taken because Morales had cursed at her and punched her in the chest.

Morales’ lawyer, Darryl Parker, said Morales likely would have been convicted of the assault charge. “If it’s your testimony against the testimony of a police officer, you’re going to lose every time,” he said.

Unless one has video proof. And Parker said they found some proof, from a cell phone video posted on YouTube.

The video shows Fry grabbing Morales and throwing her to the ground, where Morales is swarmed by other officers.

“Maria’s just lucky that that video’s out there,” Parker said. “That changes the whole case.”

Parker said that as soon as prosecutors saw the video, they dropped the case against Morales. But the damage was already done.

Morales, a veteran of the Iraq war, lost her job as an emergency medical technician, and then lost her apartment. Morales contends that was due to her arrest.

“Having to deal with this put a lot of stress on me, and I didn't know how it was going to affect my baby so that made it even worse,” Morales said, who is pregnant.

The Seattle Police Department refused to comment on the case, but Morales and her lawyer hope her lawsuit against the city will send a message about what they say was a false arrest and a cover-up.

“I want to believe the reason people do their job is because they like it, and they're (police officers) there to protect citizens and this is not something they should have done,” Morales said.

Morales and her lawyer are also asking anyone else who may have pictures or video of her arrest to come forward. They wouldn't disclose how much money they are seeking in their lawsuit against the city and the police department.