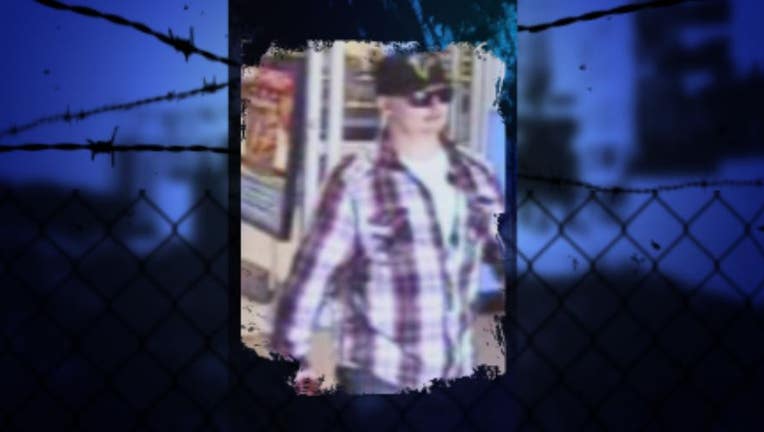 FUGITIVE CAPTURED October 12, 2015 -- Snohomish County detectives say WMW viewer tips identified the suspect as Tyler Johnson. He was arrested and booked into the Snohomish County Jail on a separate case on October 12th, after trespassing at a Walmart in Everett that he'd been banned from. Johnson was on home monitoring and wearing a GPS ankle bracelet for a prior offense at the time of his arrest. Deputies also found heroin on him. Johnson has several arrests for similar theft and identity theft crimes. He'd been banned from the Walmart early last month after being arrested and booked for using a stolen credit card there. FUGITIVE WANTED IN SNOHOMISH COUNTY October 2, 2015-- Snohomish County detectives are trying to identify the man seen on surveillance video wearing an Atlanta Falcon's cap, plaid shirt and sunglasses. He was caught using a woman's stolen credit card -- a crime detectives say is on the rise. It's not something she normally does but when car prowl victim, Diane, went to work out at the Gold's Gym in Bothell she hid her purse under her front seat. "When I had gotten back into the vehicle, I realized my purse was missing." She didn't just lose her ID and credit cards, but sentimental things as well. “Just someone having your belongings was unnerving.”

Detectives say it didn't take long for the man to start using her cards at a restaurant near the gym, the QFC on Broadway in Everett, a gas station and the Walmart at Everett Mall Way. “He walks in and appears to come from a 4-door passenger car, possibly a dark-colored car,” says Snohomish County Det. Dennis Montgomery. He says he’s seeing more cases of stolen credit cards and car prowls and gyms make perfect hunting grounds. "These guys are watching and when they see someone that walks away with nothing in their hand then they have an idea that maybe they`ve left it in the vehicle.” Park and Rides, trailheads and gyms are all prime hunting grounds for thieves looking for victims like Diane who will think twice next time: “It`s just one of those things and I probably won`t do it anymore because it`s a headache.” If you recognize the suspect, call an anonymous tip into: CRIME STOPPERS: 1-800-222-TIPS You must call the Crime Stoppers hotline with your tip to be eligible to receive a cash reward for information leading to a fugitive’s arrest. CLICK HERE for information on how to TEXT A TIP to Crime Stoppers