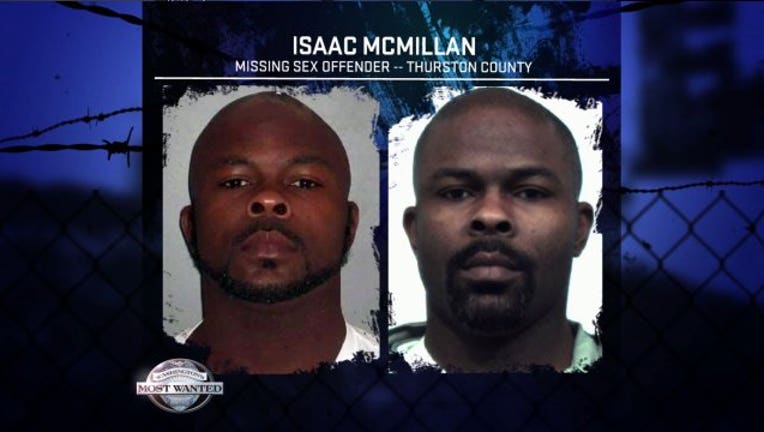 FUGITIVE CAPTURED The DOC’s Southwest Community Response Unit Officers assigned to the USMS Pacific NW Fugitive Apprehension task Force, received a Crime Stoppers tip from a WMW viewer, that Isaac McMillan was seen at a local casino in Thurston County over the weekend. The tipster recognized McMillan from the story that aired on WMW this past weekend. On Tuesday night, McMillan was seen at a local casino in Mason County. Based on information provided by DOC Officers assigned to the USMS, local authorities were able to contact and arrest McMillan. McMillan is currently in the Thurston County Jail and is facing up to 60 months in prison for new charges of Failing to Register as a Sex offender. WANTED IN THURSTON COUNTY April 5, 2013-- Convicted rapist on the run, Isaac McMillan, is a level 3 sex offender -- the worst of the worst -- wanted by the Department of Corrections in Thurston County for failing to register as a sex offender. He’s also a dangerous gang member street-named ‘T-Bone’ – and cops say, ladies -- don't trust this guy if you see him at a party. "McMillan's MO is he meets women,” says DOC Ofc. Emily Isaacs. “He ends up back at their apartment one way or another. After they pass out, he assaults them. There have been at least two victims where they've passed out and woken up in the middle of the night with him sexually assaulting them. He's very dangerous. This is not a man you want around at all." In one of his multiple rape convictions, McMillan lured a teen girl into a bedroom at a party, dragged her into a bathroom, told her he had a gun and would kill her if she didn't stay quiet -- then raped her. Here are the details on ISAAC MCMILLAN:

Officers say he's a ‘high-violent’ offender with a history of failing to register, including the most recent warrant for his arrest issued on February 25th. He's supposed to be in Olympia, but officers don't know where he is. If you know how cops can find Issac T-Bone’ McMillan, call an anonymous tip into: CRIME STOPPERS: 1-800-222-TIPS You must call the Crime Stoppers hotline with your tip to be eligible to receive a cash reward for information leading to a fugitive’s arrest. CLICK HERE for information on how to TEXT A TIP to Crime Stoppers