SEATTLE -- Travel over the Cascade mountain passes is proving to be a challenge Tuesday. Chains have been required at times both over Stevens and Snoqualmie Pass. 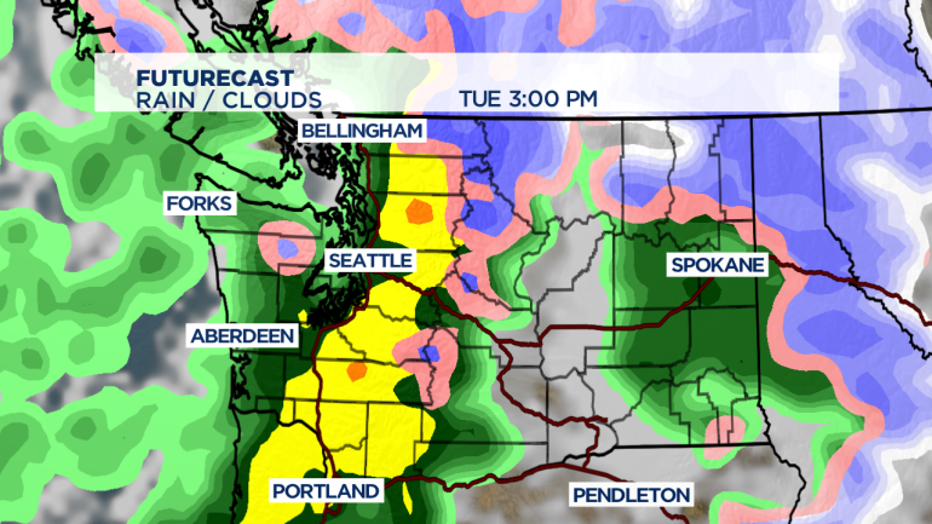 A winter storm warning is in effect right now through 4 a.m. Wednesday, with generally 1-2 feet of snow possible over 2,500 feet, up to 3 feet possible in higher elevations though.

Snow level is right around 2,500 feet this morning, but will rise to 4,000 feet later this afternoon. Look for a mix of both rain and snow. Snoqualmie will switch over to rain later in the day– with heavy rain at times - but still walking away with about a foot of new snow by tomorrow.

Lots of rain in the forecast, sometimes heavy into the afternoon. We're expecting significant rain totals around the coast, Bellingham, Tacoma and the North Sound.

Most spots west of Mason County out to the coast have already seen a half-inch to one inch of rain since midnight. This is going to create a lot of standing water and the potential for ponding on roads.

There’s a flood watch for Mason County, where the Skokomish River is expected to reach flood stage tonight, with 2.5-5 feet of rain over the Olympics leading to some flooding storm surge runoff.

Windy morning on the coast

Lots of windy weather to start off Tuesday morning – especially on the beach and North Sound. Whidbey Island already saw gusts up to 49 mph earlier this morning.

There is currently a wind advisory for the Washington coastline, the North Sound, Whidbey Island, San Juans and Port Townsend until 10 a.m. Winds are coming out of the South at 20-35 mph, with gusts at 45-50 mph. Although the interior is not under a wind advisory, it will still be quite gusty around the Seattle metro area and from Snohomish to Pierce counties.