Bitter cold coming to much of US

Bitter cold coming to much of US

CHICAGO — An arctic air mass that brought snow and ice to an area stretching from the Rocky Mountains to northern New England on Monday was poised to give way to record-breaking cold temperatures.

In Chicago, where as much as 6 inches (15 centimeters) of snow fell, an Envoy Air flight from Greensboro, North Carolina, slid off an icy runway at O'Hare International Airport as it tried to land at about 7:45 a.m. None of the 38 passengers and three crew members were injured, according to the city's aviation department. And in Kansas, the highway patrol reported that a truck driving on the highway lost control on an icy road and slammed head-on into another truck, killing a juvenile in the other vehicle.

Snowfall totals could reach up to a foot or more in some areas of Indiana, Michigan and Vermont, according to the National Weather Service. Other places in the path of the air mass saw ice and rain. Denver saw just a few inches of snow but suffered numerous accidents on icy roadways because the snow fell during the morning commute. 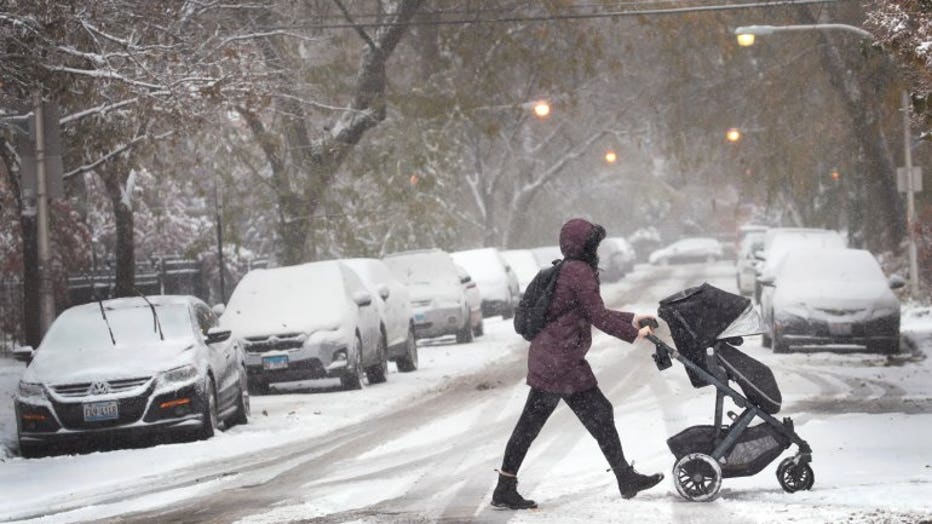 CHICAGO, ILLINOIS - NOVEMBER 11: A resident walks through snow with her child in the Wicker Park neighborhood on November 11, 2019 in Chicago, Illinois. Forecasters are calling for three to six inches of snow to fall in the Chicago area by mid-day to

More than 950 flights were canceled at Chicago's airports and officials in the area opened warming centers. In Michigan, some schools closed early, as did dozens of schools in the St. Louis area.

The snow and ice was just the first punch from a weather system that pushed frigid air from Siberia across an area stretching from the Rocky Mountains to the East Coast. Temperatures below freezing were forecast as far south as Texas' Gulf Coast.

"This is an air mass that's more typical for the middle of January than mid-November," said National Weather Service meteorologist Kevin Birk. "It is pretty much about the coldest we can be this time of year (and) it could break records all over the region."

According to Birk, the lows on Tuesday could drop into the single digits or low teens in Illinois, Wisconsin and Iowa, with highs climbing no further than the low 20s. The forecast high of 21 degrees (-6 Celsius) for Chicago would be a full seven degrees lower than the previous record set for Nov. 12.

In some areas, temperatures plunged quickly. Temperatures in Denver climbed past 70 degrees (21 Celsius) over the weekend only to fall to 14 degrees (-10 Celsius) early Monday.

One area where the low temperatures was particularly concerning was in central Wyoming, where officials were searching for a 16-year-old autistic boy who went missing wearing only his pajamas on Sunday, prompting a search that included certified human trackers, helicopters, dogs, and planes.

The National Weather Service said areas west of the Rocky Mountains would be spared the arctic air, with above average temperatures expected in some of those places.