Over the weekend, the massive Dixie Fire roared through the remote Northern California community of Indian Falls and had eaten up more than 200,000 acres. Video: Montecito Fire

INDIAN FALLS, Calif. - It could be days before officials will be able to assess the damage done to a small town by California’s largest wildfire, one of dozens of blazes scorching lands across the U.S. West.

Over the weekend, the massive Dixie Fire roared through the remote Northern California community of Indian Falls. The blaze had already leveled at least 16 houses and other structures, but a new damage estimate wasn’t immediately available because flames were still raging in the mountain area on Monday.

"Fire behavior has been so unpredictable, it hasn’t been safe for inspectors to go in to work," said Mitch Matlow, a fire spokesman. "Until things settle down, we won’t know the extent of what’s burned."

Erratic winds and the potential for dry lightning added to the challenges facing firefighters already working in steep, hard-to-reach terrain. Gusts also hindered containment efforts and the problem could get worse with the predicted arrival of pyrocumulus clouds — literally meaning "fire clouds " — which can bring lightning and the risk of new ignitions.

Fire officials said the blaze had charred nearly 309 square miles (800 square kilometers) of timber and brush in Plumas and Butte counties. It was 22% contained Monday and more than 10,000 homes were still under threat.

The Dixie Fire has charred nearly 298 square miles acres of timber and brush in Plumas and Butte counties. As of Sunday, it was 21% contained. James Torrez reports

Authorities were hopeful that improving weather will help them continue to make progress against the nation’s largest wildfire, the Bootleg Fire in southern Oregon. It was 53% contained after scorching 640 square miles (1,657 square kilometers) of remote land.

The lightning-caused fire has burned at least 70 homes and some 2,000 residences were under evacuation orders.

In Montana, four firefighters were released from a hospital and a fifth was being treated at a burn center Monday after a wildfire overran them last week, authorities said. Crews were trying to keep the 10-square-mile (26-square-kilometer) Devil’s Creek Fire from reaching Fort Peck Reservoir along the Missouri River in Garfield County. It’s one of three major fires in Montana.

Firefighters have frequently dealt with perilous fire behavior, with flames consuming huge areas of vegetation each day. Such conditions are often from a combination of unusual random, short-term and natural weather patterns heightened by long-term, human-caused climate change. Global warming has made the West much warmer and drier.

U.S. Forest Service Chief Randy Moore recalled a recent unpredictable blaze in the Lava Beds area of California that firefighters thought they had doused, only to have the fire flare up again after it burned through a system of tree roots and travelled beneath a containment line.

"It’s off the charts in terms of how some of these fires are behaving," Moore said.

Elsewhere in California, the 106-square-mile (275-square-kilometer) Tamarack Fire south of Lake Tahoe continued to burn through timber and chaparral but firefighters made progress, aided by cooler weather. The fire was 54% contained and evacuation orders that affected some 2,000 residents in 15 communities on both sides of the California-Nevada state line had been lifted. The fire, sparked by lightning July 4 in Alpine County, California, has destroyed at least 23 buildings, including more than a dozen in Nevada.

More than 85 large wildfires were burning across the country, most of them in Western states. They had burned over 2,343 square miles (6,068 square kilometers) of land. 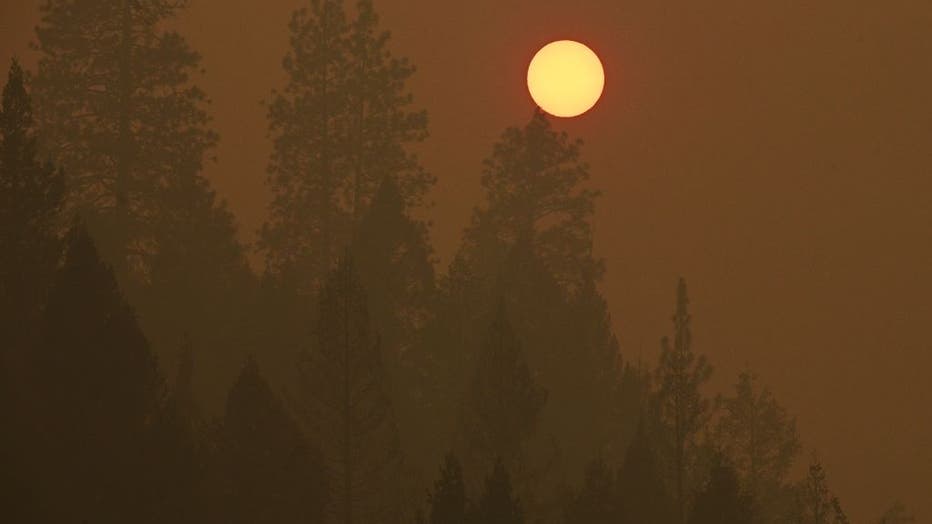 Light from the setting sun is filtered through smoke from the Dixie Fire, in Twain, California on July 26, 2021. - The Dixie Fire has taken on a more uncertain path since it first sparked in mid-July. Its circumference stretches at least 82 miles (1