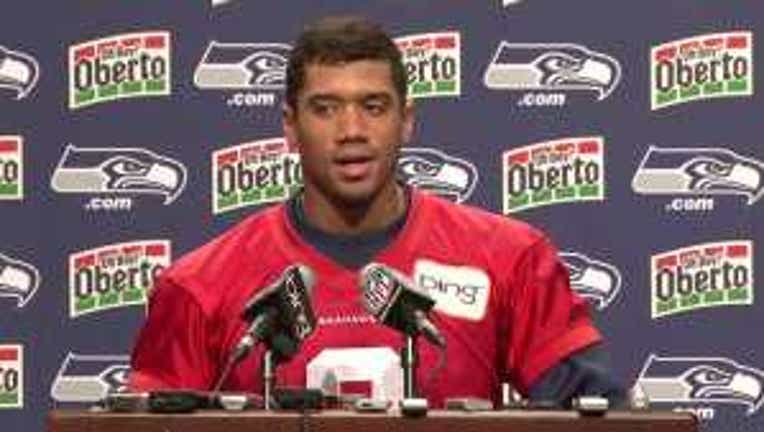 RENTON, Wash. -- Seahawks rookie quarterback Russell Wilson on Thursday was named the NFL’s offensive rookie of the month for December, adding to the media buildup before his wild card playoff showdown with the Washington Redskins rookie Robert Griffin III.

Seattle coach Pete Carroll said in an interview Thursday that he had spoken to Wilson about the pregame hype.

“I called him in on Monday to just make sure and talk to him about the media. The buildup between he and Robert Griffin was going to be huge, and I didn’t want it to become personal. I just wanted to make sure he was aware of what was coming. He had a good sense for it and all. We just wanted to have a plan,” Carroll said.

Griffin, or RG-3, was named the offensive rookie of the month in September and November.

Wilson received his honor for leading the Seahawks to a 5-0 record in the month of December, completing more than 65 percent of his passes, with 13 total touchdowns. He had the highest passer rating of any quarterback in the league in December.

But Wilson said Thursday that he’s not letting the buildup to Sunday’s game get to him.

“You definitely feel the difference, you feel the energy, you feel the excitement about the game; it’s the playoffs,” Wilson said. “And you get excited about the moment. The biggest thing is, can you ignore the noise? I think that’s what we’re focused on as a football team, (we’re) planning like we always do.”