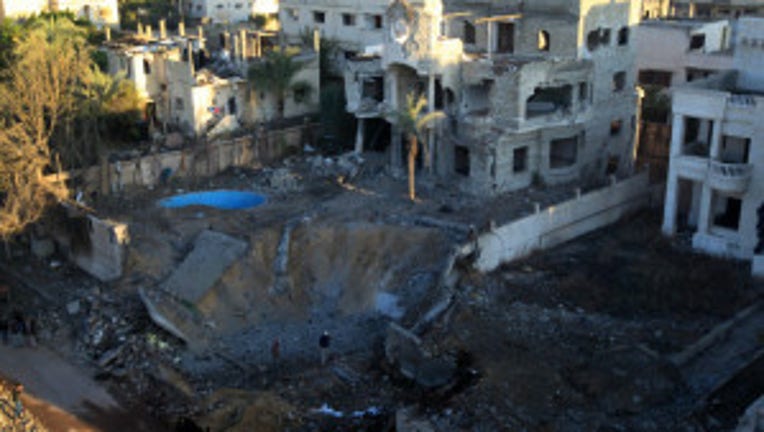 (CNN) -- War is not just about bombs and rockets. It's about words.

That's been true for centuries, of course. But the public got a rude awakening this week about just how much those words can matter in the digital age when the Israel Defense Force live tweeted its strike that killed a Hamas leader.

The military's live spin about the strike, and Hamas' response on a separate Twitter feed, has been called an unprecedented use of social media. BuzzFeed wrote that it "may well be the most meaningful change in our consumption of war in over 20 years." It's raising questions about the ethics and implications of live-tweeting a violent conflict. And it's calling into question the democratic, everyone-has-a-voice nature of Twitter, which is known more for giving a voice to protesters and civilians than military spokespeople.

In this case, it seems to be giving a megaphone to the military.

"Armies and militaries and governments have done this kind of thing with radio broadcasts and whatever tools they have at their disposal," said Mathew Ingram, a senior writer for the tech site GigaOm. "What changes it is the reach and the speed" of the messages in the social media age. "Twitter and Facebook haven't reinvented communications, but they sure have changed it in some pretty important ways."

Amid fears the violence could escalate, Israel has reported three people killed and Hamas says 15 Palestinians are dead. At least 274 rockets have been fired from Gaza into Israel, according to the Israeli military. More than 140 strikes have hit Gaza, sources with Hamas say. Both sides say they were retaliating against the other's actions.

Tweets from the official @IDFSpokesperson account, which had about 100,000 followers on Thursday, announced an attack on Gaza and reported on its aftermath.

"The IDF has begun a widespread campaign on terror sites & operatives in the #Gaza Strip," the feed wrote on Wednesday, "chief among them #Hamas & Islamic Jihad targets."

The feed followed that up with this stark image: 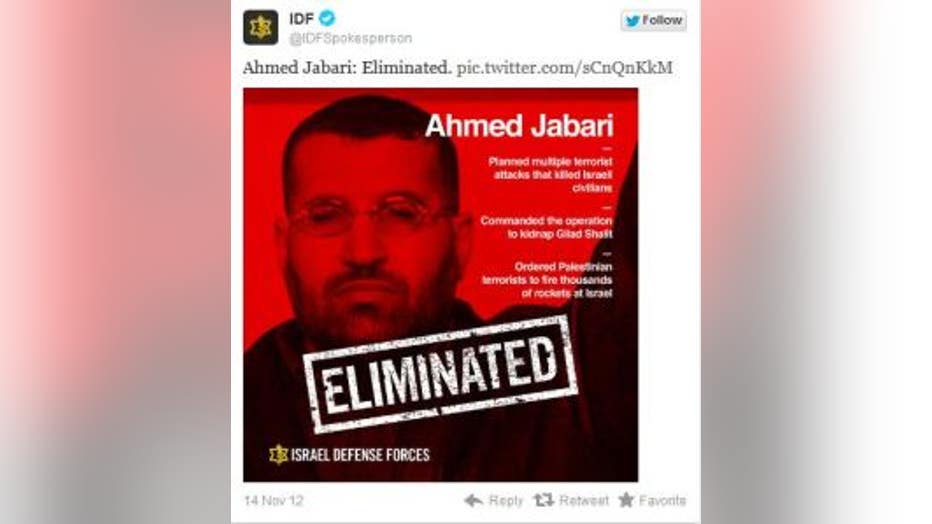 And it issued warnings to Hamas:

A Twitter feed for the Izzedine al Qassam Brigades, the military wing of Hamas, which controls the Palestinian territory of Gaza, responded to another one of the IDF's tweets this way: 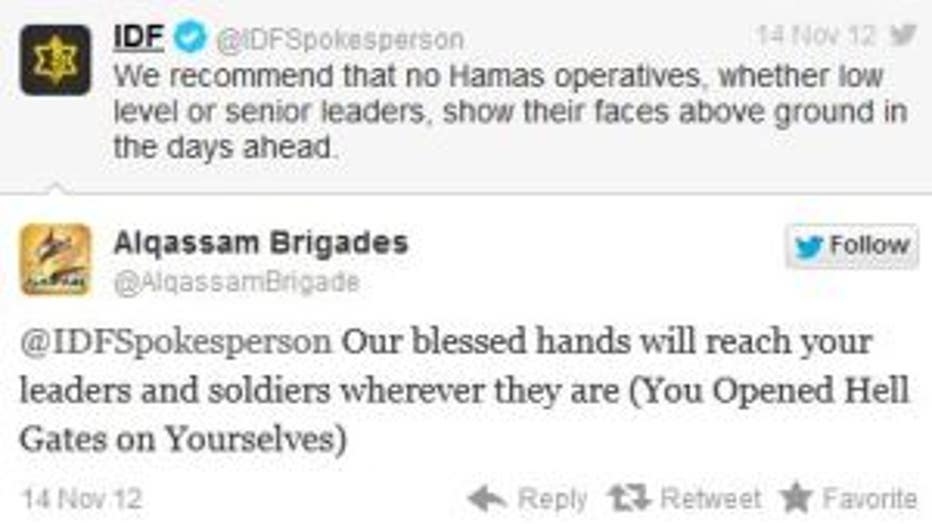 The account, which had about 11,000 followers on Thursday, also says Israel's airstrikes are hitting civilians: 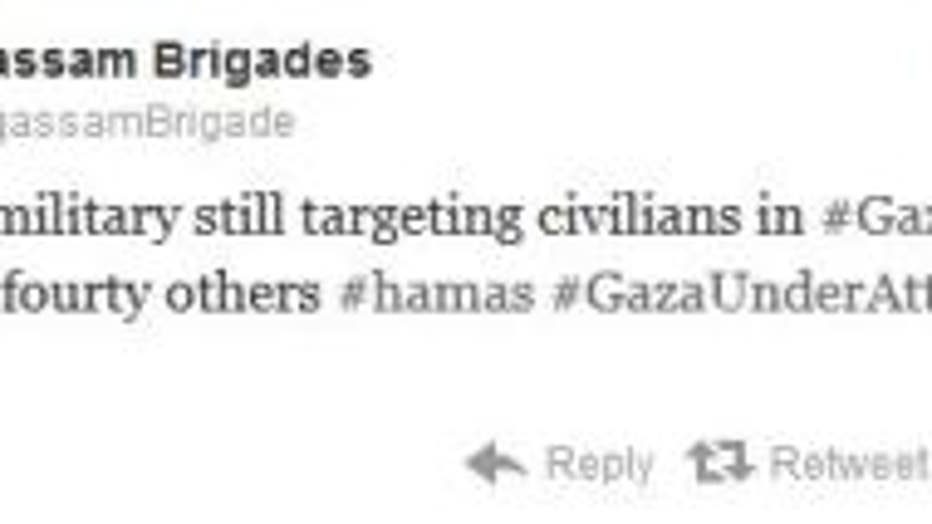 The live updates -- which include some graphic images -- also raise questions for Web companies like Twitter and Google, which owns YouTube, about what content they will allow to be posted to their sites. YouTube briefly removed a video that appeared to show an Israel strike on a car that killed a high-ranking member of Hamas. The company since has restored the video, according to a YouTube spokeswoman.

"With the massive volume of videos on our site, sometimes we make the wrong call," the spokeswoman said in an e-mail to CNN. "When it's brought to our attention that a video has been removed mistakenly, we act quickly to reinstate it."

The video site has a policy that bans "graphic or gratuitous violence." It makes exceptions, however, for content that has documentary or news value.

Others have raised the idea that Twitter should censor the official IDF and Al Qassam Brigades feeds, since they could be viewed as inciting violence.

"This clearly puts Twitter in a difficult position. They want to preserve their position as a carrier service that doesn't editorialize," Benedict Evans, from Enders Analysis, told the BBC. "On the other hand, they have terms and conditions that must be adhered to."

More lasting than the free-speech debate at the tech companies, however, may be the fact that future conflicts will have to include live updates from official military sources, said Ingram, as armies try to spin the public in real time.

"If you're an Israeli supporter, your view is that you need to do this because you need to get the information out that you believe isn't reaching people properly because of bias in the media," Ingram said. "And presumably Palestinians believe the same thing."

That could have important ramifications.

"If the Egyptian government had been doing what the IDF is doing during the Arab Spring, it would have been a very different picture," he said, referring to the activists who used social media to organize protests that toppled Egypt's Hosni Mubarak last year. "Mostly what we got was people on the ground -- participants, dissidents -- because the Egyptian government was clueless."

These groups are not clueless when it comes to social media. But their efforts to spin the public may backfire because it can't silence other voices, said Zeynep Tufekci, a fellow at Princeton's Center for Information Technology Policy.

She said it's especially jarring because the messages are stacked right on top of each other in her feed.

"I really think that the power of social media in such cases is to make real -- and very excruciatingly real, and horrifyingly real -- what war actually looks like," she said. "These (official) Twitter accounts, (from what) I've seen of IDF, they're trying to make it unreal. They're trying to spin it and have PR, and that is really not working because there are so many pictures coming out of the reality of what it looks like."

She hopes the graphic tweets will remind the public of the grave consequences for both sides. "It's not a social media war," she said. "It's a real war."